Today's been an evil case of she loves me, she loves me not. First, Bloomberg reports a White House aide saying an interim deal with China appeared imminent. The market spikes higher. Less than an hour later, a senior administration official says that report is untrue. The market reverses the spike. In between, shorts likely got nailed on the spike, and momentum buyers likely got clipped on the drop. Fair? Unfair? Unfortunately, who cares? This is the market we are in. Headline risk has always existed although social media, especially Twitter (TWTR) , has exacerbated that risk, and this administration has loved to use Twitter to shape its narrative.

The challenge exists in many sectors as well. Healthcare and PBM (Pharmacy Benefit Managers) has faced it with the White House discussing cost-cutting reform. That risk has been a weight on shares of CVS Health (CVS) , but the company appears to be combating that risk with their continued diversification.

Despite the merger with Aetna closing in November 2018, the two companies received "final" approval yesterday after antitrust concerns were dismissed. The move for CVS has been one of concentration risk management as has its foray into medical devices. Where the White House finally lands, if it ever does, on additional reform, CVS management recognized the need to allay some fears. Although the stock is down 2% year-to-date, it is 23% off the lows, so one could argue the strategy is working.

Judging from its recent earnings release last month, the argument strengthens. The company reported earnings per share of $1.89 which exceeded consensus by $0.20. Revenues of $63.4 billion came in roughly $75 million ahead of estimates as well. Based on future guidance, expectations sit around 4% average annual growth on the earnings side. That falls in line with what we've seen over the past five years.

Management guided the full-year earnings from a midpoint of $6.83 to $6.95, but after surpassing Q2 estimates by $0.20 that doesn't exactly scream optimism for Q3/Q4, especially when Q4 is considered one of the stronger, if not strongest quarter, for CVS. The company did raise adjusted operating income by $200 million, so we can conclude the second half of the year will likely see in-line earnings per share on stronger revenue.

The biggest draw for buyers stems in the company's free cash flow. Full-year estimates were raised by $300 million with CVS indicating they would apply this towards debt. The lower interest expense in Q2 helped the big beat which leads me to believe management is being conservative with EPS projections for not only Q3/Q4 but expectations next year. 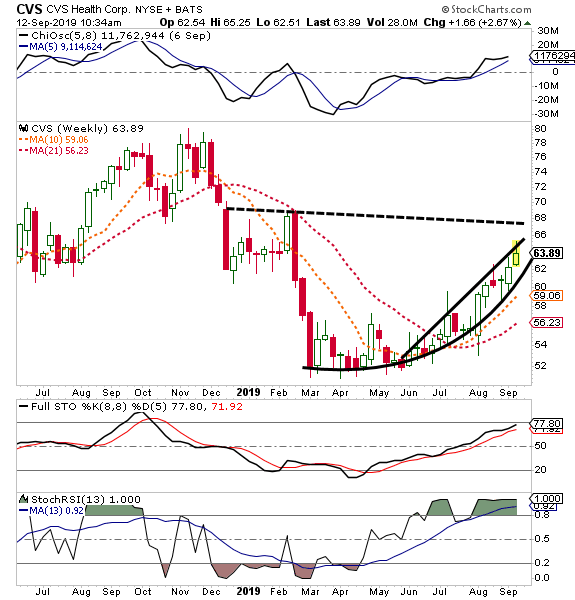 Despite the big bounce in price recently, bulls still have their work cut out for them. The $68 to $70 area is a big resistance point with $60 acting as support. We're currently sitting dead center of that range with a parabolic support trendline. Above $68 and I'd look for a push to $78. That's my preferred buying trigger. Otherwise, I'd be content to buy between $56.50 and $60 using a scaling in approach to buying starting with a portion at $60, another lot at $58.25, and the final portion at $56.50. The risk-reward buying today is a coin flip, so I'd wait for resistance to be broken or support to be tested.

Get an email alert each time I write an article for Real Money. Click the "+Follow" next to my byline to this article.
TAGS: Investing | Options | Stocks | Technical Analysis | Trading | Healthcare | Pharmaceuticals | Stock of the Day