Knew It. Knew what? Knew that I would like this Sundar Pichai fellow. Who? The new alpha dog over at Alphabet (GOOGL) , used to run Google. Oh, that guy... you like him? I do. He indicated that the firm would be more transparent, and voila!! We have numbers within numbers, for business units we only wondered about. Hmm, investors like that sort of thing. Yes, we do. Next question. You in the back. Can we buy the shares on this dip. That one's tougher, but I was wondering about that same thing myself. Let's get to work.

On Thursday evening, Alphabet reported the firm's fourth quarter financial performance. The firm posted EPS (the GAAP kind) of $51.35, which crushed expectations. There were some unrealized gains as well as tax benefits, so the beat is not really as pure as it seems. Operating margin actually declined to 20% from 21%, but we're getting ahead of ourselves. Revenue for the quarter increased 17% on an annual basis, landing at $46.075 billion, short of consensus view.

Getting into the nitty gritty, Google Search & Other printed sales of $27.185 billion, +16.5%. YouTube Ads posted revenue of $4.717 billion, +31%. Together the two amount to Google Properties revenue of $31.902 billion, which was good enough for annual growth of 18%, but did actually fall short of what Wall Street was looking for.

Now add Google Network member Properties, and the revenue of $6.032 billion(+7.8%) that this line contributes, and that brings Google Advertising up to $37.934 billion, good for growth of 16.7%. Still a bit confusing, even with such transparency. I really do suggest investors who truly wish to grasp the numbers to access the materials provided by the firm. (Fast traders/investors should be doing that for all their names upon every single release, but then again, I am often accused of being meticulous.)

Rounding out business lines that drive 10 figure quarterly revenue would be what the firm refers to as Google Other, and Google Cloud. Google Other would include Google Play, YouTube (outside of advertising), Pixels. Basically, there are quite a few consumer contact recurring revenue type businesses here, as well as hardware. Google Other was good for sales of $5.264 billion this quarter, up 10%.

The story around Google Cloud I feel is the most interesting. The unit put up impressive year over year growth of 53%, producing $2.614 billion in sales. While performance here is still not very competitive with Microsoft (MSFT) , which is growing like a weed, nor with industry leader Amazon (AMZN) Web Services, the whopping growth of all three is in my opinion indicative of an industry still playing out the early innings of game one... of a double header. The field will become more crowded without a doubt, as Google Cloud is likely in my opinion to gain on the leaders, not to mention the recently announced changes made in leadership at International Business Machines (IBM) . A change in direction there is being signaled. Is there room for three to four significant players? Would you bet against any of them? I'm not sure I would.

What this all means is that the firm's repurchase program (The firm purchased $6.1 billion worth of its own equity over the three month period reported) is in good shape to proceed. Just a suggestion... to management, paying shareholders a little something in the wake of a solid, but unspectacular quarter might be the worst idea. An annual payout of $14 still would not even be a 1% dividend yield, and demand for the shares would ramp. Just sayin'. 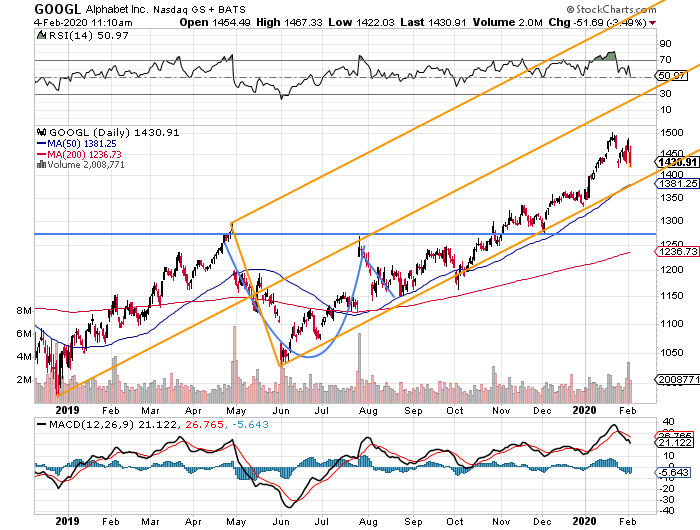 What I think I see here is that the break-out of the mid-year cup with handle this past Autumn has finally run its course. Profit probably should have been taken close to the $1500 level but that's hindsight. If I was long the shares, my target probably would have been $1525, so I would not have sold them either.

That all said, the shares remain comfortably within the lower chamber of our Pitchfork model. The lower trend line of that model now runs almost in step with the 50 day SMA. Obviously, that's a good target point for entry. We may never see that price. Short of something like that, what I would do, and I might... would be an attempt to accumulate a small long position through incremental means with an initial purchase as close to last week's $1420 support as possible. The aim would be to enter with no more of 1/8 of anticipated position size. If the shares come in, the idea is to build an average. That's called an investment. Should the shares take off while the position is still small? Congratulations. You're now a trader.

(Alphabet, Microsoft and Amazon are holdings in Jim Cramer's Action Alerts PLUS member club. Want to be alerted before Jim Cramer buys or sells these stocks? Learn more now.)

Get an email alert each time I write an article for Real Money. Click the "+Follow" next to my byline to this article.
TAGS: Earnings | Investing | Stocks | Technical Analysis | Trading | Technology | Advertising | Stock of the Day