For his "Executive Decision" segment on "Mad Money" Monday, Jim Cramer sat down with Charlie Morrison, chairman and CEO of Wingstop Inc. (WING) , a chicken wings restaurant chain. WING has 1,200 locations and a stock that's up 26% for 2019. WING is also celebrating its 25-year anniversary this year.

Morrison said Wingstop's success stems from a unique product with unique flavors that customers love. The brand is portable and has been successful in 43 states as well as nine countries, he said.

Unlike other restaurant chains that sell wings, Wingstop is a carryout and delivery operation, which requires a smaller labor force and other efficiencies that Morrison said rivals cannot match. Wingstop recently partnered with DoorDash to make delivery even easier for customers.
When asked about the success of delivery, Morrison said that, on average, delivery customers spend $5 more than non-delivery customers. That likely is because delivery customers have more time to explore the menu. Strong delivery sales helped contribute to this quarter's 7.1% rise in same-store sales growth. Before I get too hungry let's check out the charts and technical indicators.
In this daily bar chart of WING, below, we can see an uptrend from August. Prices made a shallow correction from October to December when the broad market had a deep dive. The uptrend resumed in late December and is still going strong. Prices are above the rising 50-day moving average line as well as the positively sloped 200-day average. The trading volume doesn't reveal any secrets to me, but the On-Balance-Volume (OBV) line has been rising nicely to new highs from the end of February. The Moving Average Convergence Divergence (MACD) oscillator in the lower panel shows a decline from April to May, but the two moving averages that make up this indicator look to be turning upward again.

In this weekly bar chart of WING, below, we can see an impressive rise the last two years from a base pattern in the $25-$35 area. Prices are above the rising 40-week moving average line, which has done a nice job defining the uptrend. The weekly OBV line shows a rise from early 2017, but it has yet to make a new high the past 10 months to confirm the new price highs. The weekly MACD oscillator shows a bearish divergence versus price and has been narrowing in recent weeks. A new take-profits sell signal could be coming.

In this Point and Figure chart of WING, below, we can see an upside price target near $93. A trade at $82.25 is needed to refresh the uptrend and a decline to $76.72 would weaken the picture. 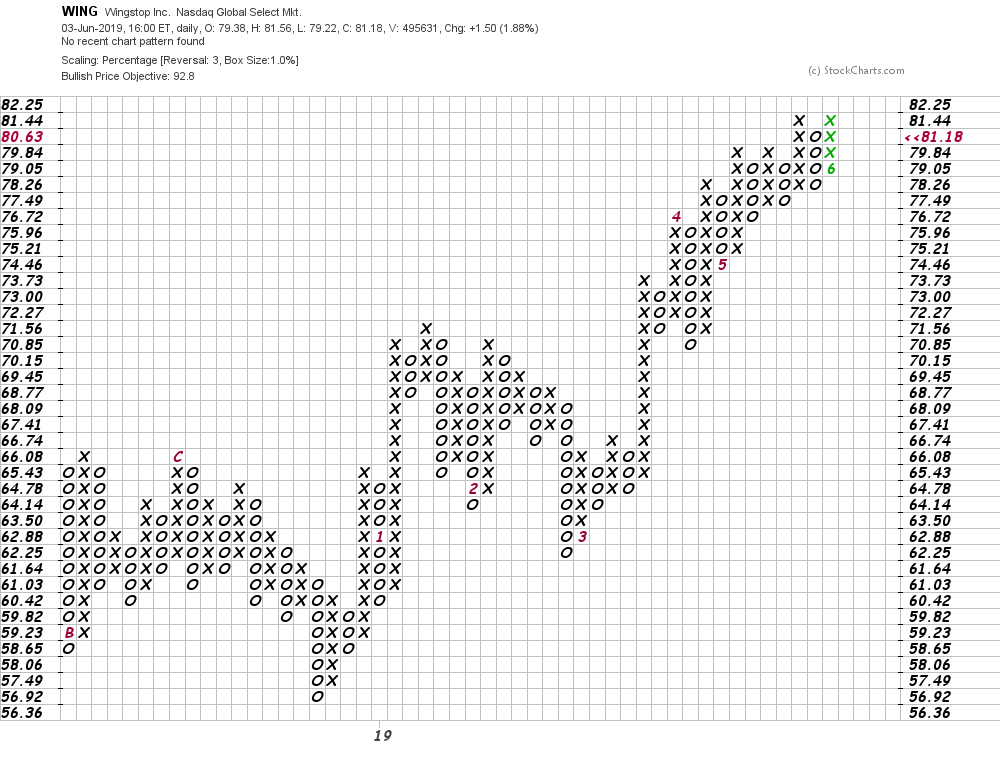 Bottom line strategy: If you are long WING from lower levels I would hold risking a close below $75 and target of $93 on the upside. Aggressive traders could initiate longs at current levels, risking below $76.