No. Not a cure. Not a vaccine. A treatment. A treatment that is effective in at least slowing the further spread of illness to global populations, might cure not just financial markets, but global economies prior to further exacerbation of negatively trending conditions. This treatment I speak of is known as Remdesivir. The firm behind that name is Gilead Sciences (GILD) . The stock is a member of my "Virus" group, and has easily outperformed the broader market as well as most of my book as equities have sold off hard.

Since the very beginning of public cognizance that there was a novel coronavirus working its way through China, biotechnology stocks, or at least those already working on anti-viral medications meant for either Ebola of HIV, have become quite volatile. One that had not really been all that volatile for an entire year had been Gilead Sciences. It's volatile now.

Gilead has been a leader in the development of anti-virals. In recent days, the firm has received some positive results in clinical trials for two different HIV treatments, Descovy and TLR-7. Remdesivir had been under development for the treatment of Ebola, and had thus far not truly distinguished itself. That said, this drug was believed to maybe have an ability to work toward at least some positive effect versus Covid-19 in China and is now undergoing clinical trials there. Actually two studies. Remember, the term novel in front of the word coronavirus means "new" as in we have no natural immunity.

The fact that Remdesivir had reached mid-stage trials already made the drug ready for shipment to China ahead of other potential treatments that other bio-techs might be working on from scratch, or built upon prior works. What we have known for weeks now is that at least 230 patients in China diagnosed with a severe case of Covid-19 had been enrolled out of the 453 patients that had been hoped for. Results for these trials are not expected until April. However, there has been some hope expressed from within the analyst community that perhaps sometime this month (March) an update might be made public.

What we know is from an extremely small sample size. Apparently two patients in France were treated with Remdesivir for Covid-19. One recovered after about three weeks and the other died. A third patient, profiled in the New England Journal of Medicine (known to be 35 years of age), recovered "quickly".

The question is this. Will Remdesivir show enough efficacy in severe cases to warrant a global deployment as part of the effort to arrest the outbreak, or at least buy time as we await something specifically designed to treat this illness? Or warmer weather. If that even helps.

The outcome of these trials, or even an update will likely take this name one way or the other in a significant move. Either GILD catches up to the rest of the market, or becomes a real winner. Even at this morning's discounted prices, GILD still trades above both its own 50 day and 200 day simple moving averages. That makes it kind of special. How do I look at GILD? Right now, this name holds a strictly defensive spot among my holdings. The second that we hear an update is on the way, this name becomes a speculative play. 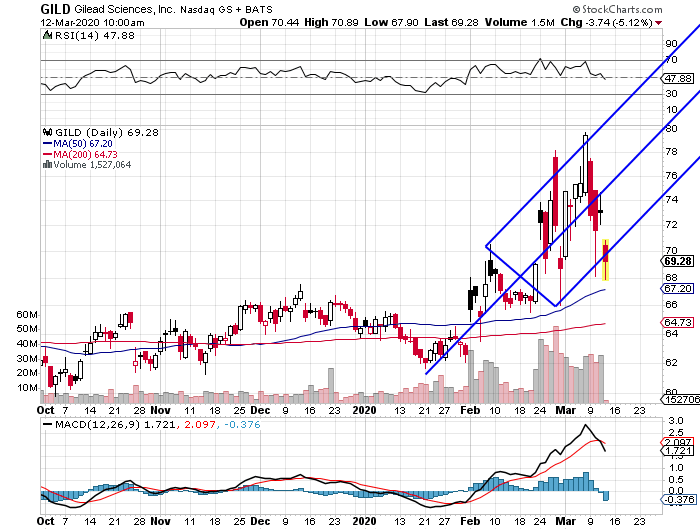 Just hold those two lines. A failure at the 64 level will likely force an algorithmic reaction meant to drive the stock down to unwelcome levels. I am not adding to my equity stake, though I am considering getting long an April 17th $70/$80 bull call spread for a net debit of roughly $3.40. Just a way to juice the long without adding a lot of risk.

Get an email alert each time I write an article for Real Money. Click the "+Follow" next to my byline to this article.
TAGS: Drug Approvals | Investing | Markets | Stocks | Technical Analysis | Trading | Healthcare | Pharmaceuticals | China | Coronavirus