As Apple  (AAPL) rolls out its live event on Monday, the action to watch isn't today, but rather in the days to come.

Will analysts jump behind the company or has the shine turned to rot?

I definitely don't believe it is the latter, but Apple may have to do a little reinventing here. The company is caught in a very slow hardware upgrade cycle at the moment. Its products are somewhat cannibalizing the usefulness of each other. Few folks need an iWatch, iPad, and an iPhone to accomplish their day-to-day tasks.

As Samsung Electronics is rolling out a foldable phone, which Apple may follow soon, is there going to be a huge market for a $2,000 phone?

Both companies are struggling to gain share with recent roll outs at half that price and ceding ground to lower-priced Huawei Culture Co. in Asia. The issue could be we are seeing more and more pricier phones without a splashy upgrade. The next three iPhones models are highlighting triple rear cameras. While it sounds cool, will that be enough to get the masses off the fence who have purchased a phone in the past few years?

Today's expected announcements should bring something to be at least a little excited about. Apple is looking to further capitalize on one of the fastest growing components of its business, and the tech industry as a whole, as it unveils a television and movie streaming service as well as a game subscription service.

The gaming service doesn't appear to be challenging Alphabet (GOOGL)  and its cloud-based Stadia game streaming, but rather focusing on the fast-growing App store. This will target IoT like iPads and iPhones. A popular service is something that could spur phone upgrades or the addition of iPads as gamers look for the latest tech to enjoy a subscription.

I view this as a move in the right direction. There's no sense in challenging Google's cloud here, but if Apple could find a way to parlay it into IoT, then all the better.

In terms of television and movies, Apple has done well with music, so it's a natural jump. Unfortunately, this field is becoming highly saturated in quick fashion. Obviously, everyone is chasing Netflix NFLX, but The Walt Disney Co. (DIS) will quickly establish itself as a major hurdle.

The question for Apple becomes what it will have to pay for content. Cash isn't the issue, Apple has plenty of it, but is it worth spending here? I think they've shown enough with their App store to make it work profitably, but I don't see this as appetizing as a gaming subscription service.

I guess you could say I don't see it as a game-changer.

Enough with the boos.

The stock action, below, resembles that of the market, with the big drop into Christmas Eve and the subsequent first quarter bounce. If Apple can get a weekly close above $200 then things open for the bulls to $225. Until then, we are in a trading channel about $10-$15 wide (around 8%) with the bulls holding the upper hand.

Until we are under $182 or above $200, this looks like a coin flip. There's been little edge on Apple for quite some time due to its market cap and popularity, but it's even worse (if that's possible) with the current setup. 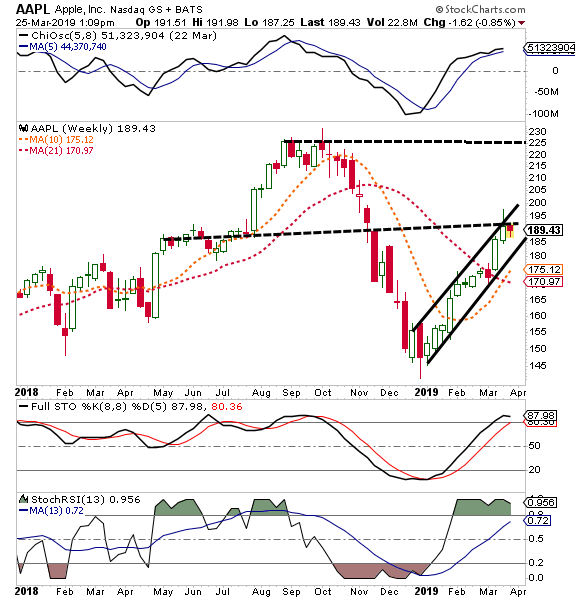 Get an email alert each time I write an article for Real Money. Click the "+Follow" next to my byline to this article.
TAGS: Investing | Stocks | Technical Analysis | Trading | Software & Services | Technology | Stock of the Day