Apple (AAPL) holds the firm's big 5G capable iPhone launch event this week on Tuesday, just about a month after launching a number of other interesting hardware such as next generation iPads and Apple Watches. World's greatest consumer electronics company. Ever. Why even question? Just hop on board. Yes, I am long this name, and I have not traded it very well to be honest. Yeah, I'm up fairly nicely on this tranche, but I missed a whole lot of what came after my last "out" trade and before the stock split. I have traded when I should have owned. No time for sorry. No reason either. The trades made were profitable, some of them nicely so. The only losses were in "opportunity" cost, not in the P/L. What now, though?

The Financial Times ran an article over the weekend that some of you may have read. Apparently, EU regulators are putting together a list maybe some 20 companies deep. All would be large technology drive companies that dominate their or some of their industries. The article mentions Apple, Facebook (FB) , and the Google division of Alphabet (GOOGL) by name. Though we still do not know what precise criteria will land a company on this list, the idea is to force the mega-cap techs to comply with stricter regulations than smaller competitors might have to. In fact, they may have to share their data with other firms. The firm goes where other articles and other regulators have gone. Addressing structural issues through potential break-ups or forced sales of business units.

Last week, a congressional report suggested that a number of these bigger firms, including Amazon (AMZN) and even Microsoft (MSFT) could face such scrutiny in the U.S. Apparently, the UK's Competition and Markets Authority wants to have a look for themselves as well. Did I mention that the individual U.S. states are also looking into these matters. The fact is that for some of these firms, as a shareholder, we may see volatility in these names related to such headlines, but I don't think I mind a portfolio containing the sum of the parts created as opposed to the whole. Until then, we have seen this movie before. There will always be fines. Break-ups, in my opinion, are a long way off.

Apple is set to unveil a line-up of new iPhones. Various sizes. Various capabilities. Various price points. Wedbush's Dan Ives sees a potentially super-sized upgrade cycle, one that could exceed the record year that was 2015. I have to wonder, because I have changed my mind on this several times over... One, does the consumer see the utility in 5G? Answer, probably not... or not yet anyway. Two, even if they do, can they afford to upgrade in this, the year of the pandemic? That's a big unknown.

A multitude of reasons, my young friends. Only one of which is the ability to create a persistent demand across core consumers for newer, updated versions of what they already have. The main reason is those consumers themselves. The installed base. They are the ecosystem. That's why Apple can move away from its valuations of yesteryear, and toward those of break-out software stocks. Why? Recurring revenue. Improved margin. More transparency in a predictable outlook.

Music, streaming television, the cloud, even now healthcare. The hardware... phones, tablets, watches, air pods... they all keep the ecosystem in place. They all enforce loyalty. That's why we buy this name. 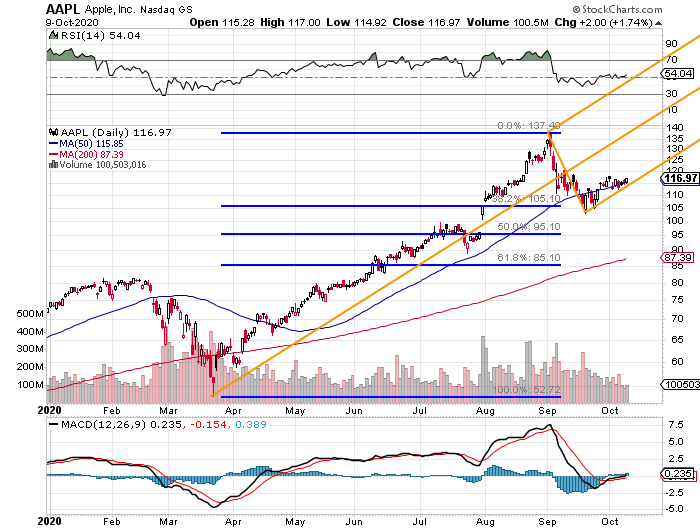 The eyes are easily drawn to the Fibonacci retracement of the bull that ran from the low of March through the high of early September. Support showed up just below the 38.2% level and then clung to either side of the 50 day SMA, now at $115.85. The stock appears to be using this line as a means toward creating a Pitchfork that potentially takes the shares to $125 in the short term, worst case (my opinion).

Should a range that makes full use of the Pitchfork's entire lower chamber... these shares could well hit prices north of $140 this year. Would that surprise me? No, $140 is my price target. Panic point? Nope. I'm done trading this name for now. I'm just going to own it. For now. I think. Would I buy it today if I were flat? How about this. I'll add when the share price retests the 50 day. Regardless of which one moves toward the other.

Get an email alert each time I write an article for Real Money. Click the "+Follow" next to my byline to this article.
TAGS: Investing | Markets | Stocks | Technical Analysis | Trading | Software & Services | Technology | Technology Hardware & Equipment | Consumer Products