I stare at my screen. The market keeps finding ways for many of us to stay in, or even ahead of the game. The trick, if there is one, is to know the difference between what is investment and what is tradeable. These strategies can be pursued via different stocks using different strategies. One can even try multiple strategies using the same name. Readers saw what I did with Amazon (AMZN) over the past two weeks. From core weight to extremely overweight to slightly underweight... all in a matter of days.

That said, most of our readers have day jobs that might have nothing to do with reacting to changes in market behavior that take place on a minute by minute basis. So, I think, of my holdings, or even elsewhere, what would be a good, versatile name for our readers to park some capital in for investment. Why versatile? This name has to be able to compete, regardless. Regardless of what? Able to compete in a re-opened economy. Able to compete in an economy shuttered. Able to compete on price. Able to attract on-line advertisement. Oh, and some kind of dividend might not hurt.

I pulled off my aging NY Mets ball cap. I scratched my head. I looked to my left. I saw a frozen still of Jim Cramer's face from a DVR'd episode of Mad Money. I looked to my right, and the Doosan Bears are taking on the KT Wiz somewhere in South Korea on Disney's (DIS) ESPN+. You thought baseball was over. Not for baseball nerds it's not. I put the ball cap back on, and I thought of Walmart (WMT) . Let's dig in.

Let me count the ways. Most readers know that I am a long-term Walmart bull. Most readers know that I feel that both Amazon and Walmart got my family through the height of the pandemic in the New York area last spring when I was especially ill. That's part of "this" why. As the virus once again spreads and shakes the very foundations of normal function, it is these two firms that consumers afraid to enter retail locations will rely upon. They will also turn to Target (TGT) and Costco (COST) , but I found Amazon and Walmart to be head and shoulders above the competition for home delivery when the chips were down.

By the way, Walmart's domestic e-commerce business grew an astounding 97% for Q2 2020. What comes with e-commerce, which is a low margin business? Advertising dollars, which is an extremely high margin business. Just ask Amazon. Success in e-commerce is the driver. Advertising is where the cream is, and Walmart is just starting to scratch that surface. In addition, Walmart has copied Amazon to some degree with the creation of Walmart+ which will be a consumer loyalty program akin to Amazon Prime.

Unlike Amazon, Walmart has the broad brick and mortar presence that sells everything from apparel to appliances to groceries at budget friendly prices. That means that Walmart is where consumers will turn as the size of any coming fiscal support for struggling households has become very uncertain.

Walmart is also growing globally, in India particularly. The firm also pays shareholders $2.16 annually just to stick around. That's good for a 1.46% yield. Not fantastic, but not nothing, while allowing one to stick their toe in both the realms of an economy reopening as well as an economy shut in... without having to rotate. 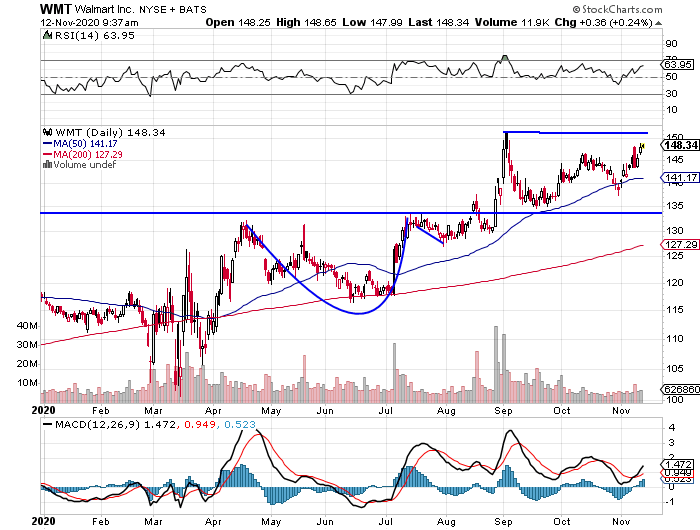 Readers will note that these shares broke out of a cup with handle pattern in early September only to come back and re-test the pivot before settling into what I see as a basing period of consolidation. Our new pivot? That would be the $151 level produced on that spike in September, which is just short of my prior price target of $153.

Now, this is where it gets interesting. Should this pivot be taken and held... the price target will have to be moved into the low $180's. No joke. I add to the name close to the 50 day SMA, which is currently $141. Don't forget, Walmart reports next Tuesday, prior to the opening bell.

Notes: The investor is faced with short-term (Nov 20) equity risk that increases at the $141 level. Should the shares be out to the investor, the long position would double to 200 shares with a net basis of $143.28. The investor also faces the possibility of having the original 100 share position called away at $152.50 at expiration. This would be good for a profit of 4.7% over three trading sessions. Rather hang on to the stock, but really not too shabby.

(Amazon, Disney, Walmart, and Costco are holdings in Jim Cramer's Action Alerts PLUS member club. Want to be alerted before Jim Cramer buys or sells these stocks? Learn more now.)

Get an email alert each time I write an article for Real Money. Click the "+Follow" next to my byline to this article.
TAGS: Investing | Markets | Options | Stocks | Technical Analysis | Trading | Retail | E-Commerce