Shares of Nike (NKE)  on Friday morning will trade at a discount to Thursday's closing price. The firm reported fiscal third quarter financial results that beat expectations for earnings per share by three cents on revenue that printed in-line with industry consensus. Though the shares sold-off over night, there is a lot of good in the report. Net income grew nicely. Gross margin was strong. The Nike brand was hot. The firm's own e-commerce store "Nike Direct" performed well across all regions. So, why the sell-off?

Well, there were a few negative takeaways. Nothing catastrophic. Just a few items that need to be looked after. One problem investors are trying to work around this morning is home market growth. North America, by far the largest market for this purveyor of athletic shoes and sportswear, printed 7% year over year growth, well below the growth seen in China (growing rapidly), and well below what Wall Street was looking for. The firm makes clear to those listening that the less than expected growth at home was more due to mistimed product launches than it was to any decline in demand for these products.

The community of securities analysts seems to be mostly buying into that story. I will tell you what has me mildly concerned. Revenue growth for the quarter was 7% year over year. That was in-line. We covered that above. On a constant currency basis, that 7% turns into 11%. This is a common problem these days for U.S. multinational large caps. On a sequential basis, that 11% is down from 14% from the quarter prior. A big deal? I'll let you know in three months.

Can March Madness Save Nike?

Yes, and no. While it seems likely that this annual collegiate basketball tournament season will get some people fired up about the sport that they might go buy some basketball shoes if they get hit with the right marketing. I would think this a net positive. Most of the time. Shareholders will undoubtedly be watching these games with finger and toes crossed that no high profile athlete goes down in a heap on national television as that athlete's shoes crumble. That would be a net negative, by the way. 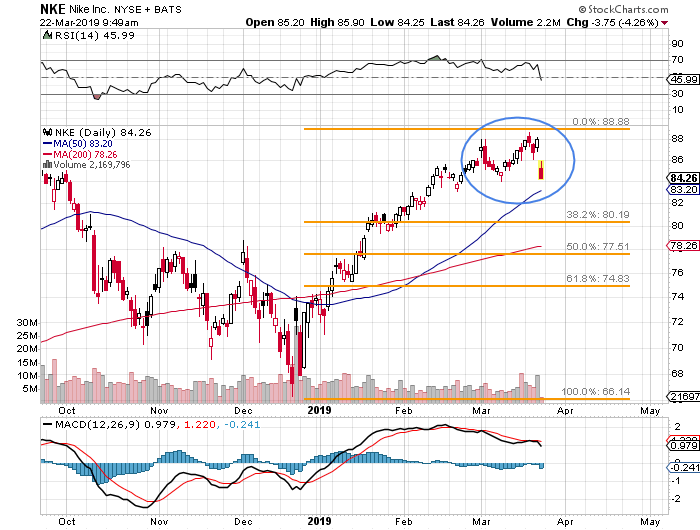 I have put within the confines of that blue egg shaped thing that I drew on the chart is what I want you to see. That was a cup and handle set up. Those are usually bullish. This one, if not interrupted by this earnings news, might have been good for a quick three to four bucks on a short term trade. I'll explain the whole idea behind a trade like that to anyone who needs understanding. I like to help people, and I'm not here to sell you anything.

So what now, that there has been a failure at the point where the handle turns into a point of purchase? The 50 day SMA runs with an 83 handle. The Fib model tells me these share may need to hit 80 before they rock. Here's what a trader could do:

Instead of buying this dip in this environment, a trader interested in taking a bullish stance in a risk averse way that could help an investor build a long position methodically, or just get paid to expose oneself to risk.

Notes. The investor in the case of a downturn could end up long 100 shares by April, 200 shares by May, and 300 shares by June worst case. In that case, the net basis for the position would be $78.64. It is at that point that the investor would turn and sell three calls with higher strike prices and at a future expiration in order to further erode this basis. It is very possible to turn a net profit on shares sold lower than where purchased. Half of this game is risk management.

Get an email alert each time I write an article for Real Money. Click the "+Follow" next to my byline to this article.
TAGS: Earnings | Investing | Stocks | Technical Analysis | Trading | Apparel | Retail | Sports business | Stock of the Day