We've All Done It

Ever roll your eyes, and think to yourself... "I can't believe this person is still talking?" We've all done it. Not really so bad, it is, as long as more than one side extends the topic. On Thursday, two bills aimed at reopening the parts of government currently shut down failed on the U.S. Senate floor. One bill brought by the Republican side was simply the president's proposal made last weekend that offered compromise on several issues but not on his wall. The other, a short-term stop gap idea brought by the Democrats that would leave us all in the same place in early February. With 60 votes needed to advance, neither bill really came that close to doing so. Both bills lost votes on their own side of the aisle while gaining something on the other, and that might just be the positive takeaway if there is one.

Ever heard of Democratis? No? How about democracy? I know that you've heard of democracy. Well, Democratis was a Greek intellectual (philosopher, scientist, mathematician, etc.) in the pre-Socratic era. Before you get excited, his ideas on equality were not exactly in line with how we think today, but Democratis is attributed one quote that I think pertinent this morning. He's the one that said "It is greed to do all the talking but not to want to listen at all." I think that our leading politicians have up until now been greedy in this sense. It would appear from my perch in the darkness of night that perhaps some on both sides are starting to understand the gravity of this situation. Several senators offered what sounded like optimistic soundbites in the wake of those failed votes. Not for the marketplace but for those regular folks now in a bind.

Why Is Risk-On In Vogue Overnight?

One word. China. The PBOC (China's central bank) announced a bill swap mechanism late Thursday aimed at slowing down the nation's economic slowdown. What this move does is permit the swap out of commercial bank "perpetual" debt for central bank bills. Why? To use those bills as collateral. Perpetual mean no maturity debt, Sarge. Correct. Why again? The plan is to force increased credit into China's real economy. Is this a reversal of what the Xi administration had been trying to do... reign in the nation's credit bubble? Sort of. Sarge, is this a form of quantitative easing? I think, kind of, maybe. Best answer I have right now. Certainly this will increase money supply.

The central bank is not yet openly buying the nation's bonds, but how far off can that be if this does not do the trick.This one mechanism is in addition to the lending facility announced on Wednesday meant to inject up to 250 billion yuan into the economy, according to Xinhua.

Taking What The Market Gives

Twenty-four hours ago I mentioned Lam Research (LRCX)  and said that while I wanted to get long that name, I would not pay up ten bucks for those shares. The truth is that if I had, I already would have taken a profit. LRCX closed up $21.87 at $161.20 on Thursday, and is higher than that as the creatures of the night make their way through my yard. What I did do, other than set up for a pop in Intel (INTC) that is not going to work, was ring the register in a couple of names that Lam Research and Xilinx (XLNX) were able to drag along in their "pin action". Those names being Nvidia (NVDA) and Micron (MU) . I am still long both, but was glad to reduce at surprise profits as parts of Wall Street obviously were caught in at least something of a short squeeze. The Philadelphia Semiconductor Index (SOX) ran 5.7% because Lam announced a buyback, and Xilinx deployed a 5G network in South Korea. Kaboom.

On Intel, what can I say. I don't know if I am more disappointed by the nearly across the board decline in business line performance, or the fact that the firm still fails to name a permanent CEO. Is there no one qualified individual who wants this job? Investors start to wonder, and that will be reflected on the opening print.

So take what the markets offer. I did. On Thursday, I padded my long in SPDR Gold shares ETF (GLD) . Why, aside from creating even more cash after taking something off of my semiconductor longs? One, gold was lower on Thursday. Two, I try to maintain a 7.5% allocation to the precious metal. For those new to this column, the idea is to invest 5% of an overall invest-able portfolio picture toward physical gold as a safe haven diversifier/store of wealth type vehicle, and then depending upon current conditions, another 0% to 5% in paper gold such as an ETF, as such an instrument is easier to manipulate in real time... all the while keeping overall exposure between 5% and 10%, and understanding that only the physical portion will be truly reliable in an apocalyptic scenario.

Investors may have noticed that Chinese holding of U.S. Treasury products, as of October, had declined by 5% form the peak level of investment in these debt securities back in August of 2017. Investors may have also noticed that China added roughly 10 tons of physical gold to the nation's foreign reserves in December, the first add since October 2016. A move toward less reliance upon the U.S. dollar? I think we all know that's where China wants to go with that. Earlier this week, Goldman Sachs head of commodities research David Currie, in discussing the firm's $1,425 an ounce 12 month target for gold, cited possibilities for a weaker dollar developing into increased demand from both China and India.

As regular readers well know, I gave you Zuora (ZUO) as my favorite stock for 2019 as the year began. Then I backed it up on Liz Claman's show at the Fox Business Network. I thought I'd update the pick. Hopefully, most readers already know what Zuora does. In short, the firm through it's multi-tenant cloud platform aids business type clientele in launching, learning, scaling, and monetizing potential recurring revenues... in other words, subscription services.

The firm's platform actually gets smarter once in place, so that the firm's clients better understand the needs of their clients, and how to optimize that subscription revenue. What we are talking about is not just media... online newspapers, or video streaming. We are talking about everything you consume. Everything you use. Think about that. Not owning anything if you don't want to. Lower upfront costs to consumers. Constant revenue for the producers. Everything. Just ask CEO Tien Tzuo. I did, when I met the man on Thursday evening. Ever know that you're speaking to a really bright guy? Yeah, that, but still at ease. Just two kids from the neighborhood. A Brooklyn guy and a Queens guy. Not just at ease, but easy to like.

After a volatile couple of weeks, the shares stand 1.2% higher than they had on New Year's Day and are 31% off of their December lows. Remember the IPO lockup period expired in mid-October, and then equity markets basically melted over the course of the quarter. The firm is expected to report sometime in late February or early March. I have not seen an official announcement as of yet. Current quarter consensus is now for EPS of $-0.11, up from $-0.15 last time that I wrote to you on this name. Projected revenue is still in the ballpark of $61.4 million. Full year revenue expectations for both 2019 and for 2020 have expanded since then too.

3) Will you hedge your position? Duh. 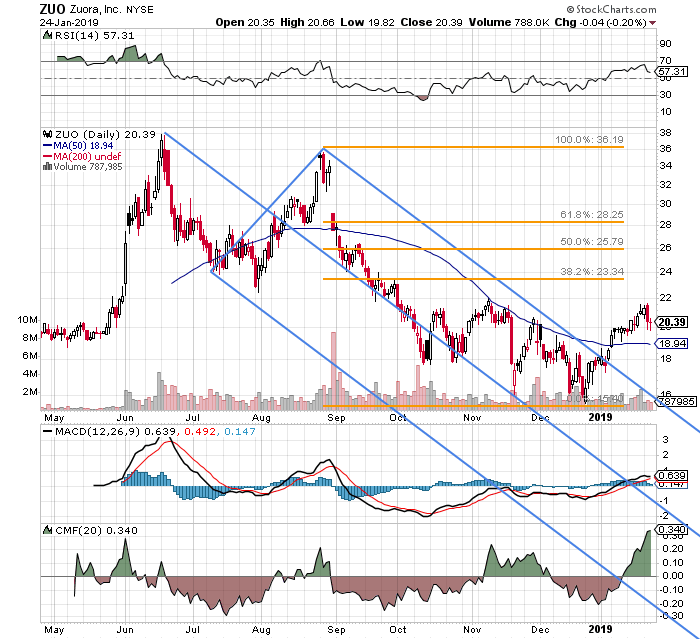 Options strategy amounts to a credit of $1.29, reducing net basis to $19.10. Strategy exacerbates long exposure should the shares rise above $22.50 by mid-March. Trader is also exposed to increased equity exposure should the share price decline precipitously over that time frame. Worst case: Trader would be long 300 shares at a net basis of $18.87 excluding commission.

Get an email alert each time I write an article for Real Money. Click the "+Follow" next to my byline to this article.
TAGS: Earnings | Gold | Investing | Stocks | Technical Analysis | Trading | Treasury Bonds | Software & Services | China | Market Recon