We all knew that UnitedHealth Group (UNH) was a darned good company. In fact, most of us who owned the shares did so for one reason. The name is "best in class." What do you do when a name that you own is part of a larger group that is targeted by the administration of the President of the United States... and on top of that in the currently contentious atmosphere in D.C., this is the one area where the opposition agrees with the administration? I would think that the investor might sell, and that's what I did.

The shares have sold off in semi-regular fashion since spiking in late November, early December. The stock rebounded with the broader markets in January, but then, unlike the rest of that broader marketplace, the name once again in concert with the Health Care sector, started to underperform. This (Tuesday) morning, the firm reported their first quarter results. Their execution as best of breed is evident. UNH beat earnings per share expectations decisively. The firm grew revenue generation by 9.3% year over year, another sound beat.

Taking a glance at the numbers within the numbers, investments and services were strong. They are small, however. How did premiums paid do? Just fine is the answer, at 7.8% growth for the line item that represents roughly 78% of the whole. Products, a line that amounts to about 13% of that same whole saw robust growth of 20%. There was more strength in the firm's Optum pharmacy managed benefit unit, which is interesting because the president has been vocal on drug pricing, and the method by which rebates play a role in that business.

Perhaps even more important than past performance, which is not highly valued by investors when waters rise, is future guidance. The firm raised it's own outlook for full year EPS to a range spanning $14.50 to $14.75 from the old range of $14.40 to $14.70. That's why the shares were initially strong in early trade. Now, they're slightly lower.

I'll tell you what. The name is best in class, but the class has problems. I don't like to see total debt outweigh cash on hand like this. I don't like to see a Current Ratio this far below 1. I don't like to see Cash flows from operating activities decline significantly year over year. All of those factors are apparent here. Just looking over the consolidated balance sheets, I am satisfied with the profit that I had taken, and do not feel motivated to jump back in. Let's see if the charts tells us anything. 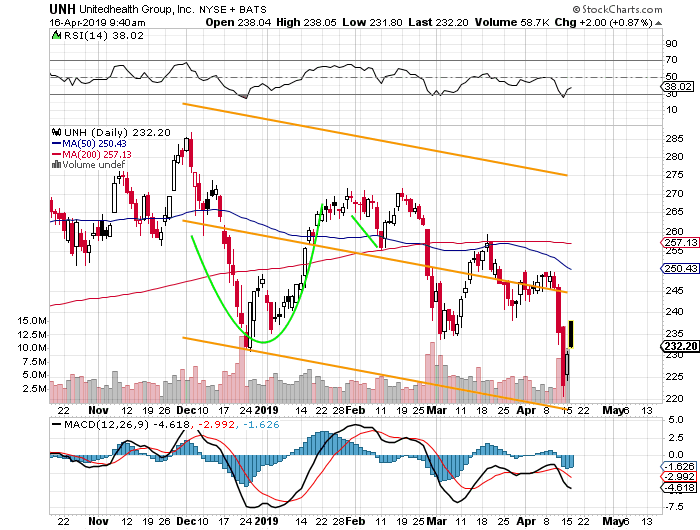 As you can see in green, this name failed precisely at pivot, coming out of a fairly well formed cup with handle. At that point, the broader trend lines - painted orange for you here - seem to take precedence. I need to make tow points.

1) I think we need to see a move above the central trend line to be more convinced that the technical condition is improved.

2) The political atmosphere is still hostile. Until that changes, there remains the shadow of danger to investing in the space.

Trust me, gang. A piece of me wants to grab a few shares here. I just can't. You can still sell $200 puts expiring in a month for a buck. That might be so far away as to make the risk thinkable.

(UnitedHealth is a holding in Jim Cramer's Action Alerts PLUS member club. Want to be alerted before Jim Cramer buys or sells UNH? Learn more now.)

Get an email alert each time I write an article for Real Money. Click the "+Follow" next to my byline to this article.
TAGS: Earnings | Investing | Markets | Options | Stocks | Technical Analysis | Trading | Healthcare | Stock of the Day