The truth? I'll be selling my Boeing (BA) , or at least part of it. Why? Simple. This was the trade. I came in heavy, at 150% of what I would call a full position. Up more than 45% in about two months. Now, that's what I'm talking about. Boeing will go higher once travel returns to normal, and once trade relations between the U.S. and China warm up, and/or trade relations between the U.S. and the EU improve. That won't happen tomorrow, or next week. Today's news was the catalyst for this initiation in a name that I was never really in love with in the first place, and that trap has been sprung. Time to put this position if not back in in the box, at least in its place. In the meantime, rock on.

Readers all know that Boeing's once best selling passenger jetliner, the 737 MAX, had been grounded since March of 2019 following two crashes linked to a faulty stall-prevention system known as MCAS, that cost 346 people their lives. This (Wednesday) morning, the FAA (Federal Aviation Administration) approved the 737 MAX for a return to commercial service. Boeing has 450 of the aircraft already built and in inventory, and an order backlog that numbers a rough 3,400. That said, nobody really knows how many orders are really there. What will demand for not only this aircraft, but more broadly air travel will be going forward as the Covid-19 pandemic surely appears to be getting far worse, before it will start getting better. Though we do believe that it will get better as both Pfizer (PFE) and Moderna (MRNA) have come forward with promising data on the safety and efficacy of their most ready vaccines.

From a corporate perspective, this is indeed progress necessary to get from a very bad place to something better. For the quarter ended in September, corporate revenue decreased 29.2% year over year, led lower by revenue directly tied to commercial aircraft, which was down an incredible 56.4%. A lot of work must be done. The FAA's directive requires new flight control software, a new or revised flight manual including revisions to crew procedures, new MAX display systems, all of which is probably already done or in the process of being done.

Still, aviation regulatory agencies around the world will have to fall in line behind the FAA, after not just Boeing's but the FAA's own credibility had been brought into question amid this, for lack of a better word, calamity. Investors must understand that last week the House of Representatives unanimously passed a bill that would, if enacted into law, reform how the FAA certifies airworthiness. The manufacturer will not be permitted to sign off on airworthiness of even the 450 737 MAX aircraft that are already in storage. Individual, in-person inspections will be required prior to delivery of these aircraft. The Senate takes up a similar bill at the panel level today.

As for clientele, American Airlines (AAL) has already made plans to relaunch this craft prior to year's end. Southwest Airlines (LUV) , the only airline in any of my portfolios, and previously the planet's largest operator of the 737 MAX, will hold off until the second quarter of 2021.

The trade was easy money. The certification had been telegraphed well ahead of reality, as the stock flatlined all summer. So, now the plan is to take off what was a successful trade, and reduce the risk, leaving an investment in place that is to some degree at least composed of "house money." The investment will be volatile. It will take perhaps up to a year to inspect the 450 aircraft in inventory, and the firm has already announced that it does not intend to ramp up production until it is better known where or if there will be demand.

What that means is that Boeing is still going to be heavily reliant upon the business of defense for the time being, which it is good at, but given fiscal budgets moving forward, is no sure thing. That goes for Boeing's suppliers as well. I like a firm like Raytheon (RTX) . At least there is not a reliance there upon Boeing's commercial business. There will be no surge in orders for aircraft engines anytime in the short-term, and Boeing will go ahead with the reductions that the firm has planned for payroll. 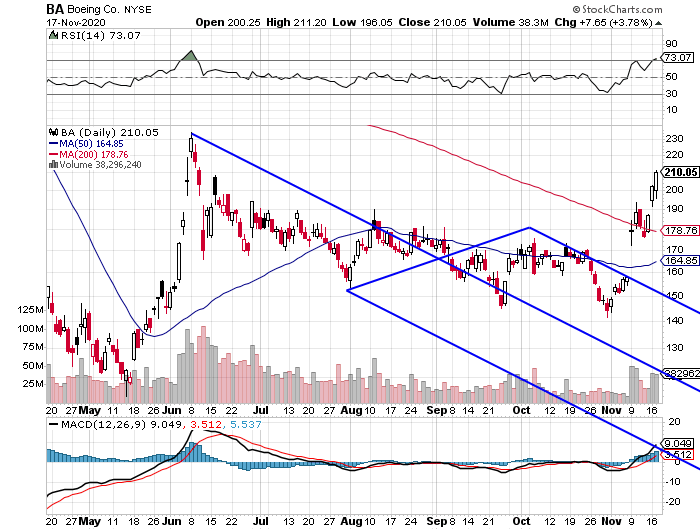 The stock has clearly broken out to the upside. I see pre-opening trades in the mid-$220's. I will sell at least 1/3 of my long position this morning. As for a new target price, we'll have to reassess. The old target had been $225 which is close enough to where I see it now. I do see the possibility that upon bad news around the economy, the virus or both, that the gap created earlier this month may have to be filled. That will be an opportunity to add back on what we sell today, not to panic. Understand what I'm telling you. You have to watch the evolution of the firm's cash flow. You are going to have to show an elevated level of finesse.

Get an email alert each time I write an article for Real Money. Click the "+Follow" next to my byline to this article.
TAGS: Regulation | Investing | Markets | Stocks | Technical Analysis | Trading | Aerospace | Airlines