Who will light the fire

That I need to survive?

Who will be the life blood

Coursing through my veins?

For Twitter (TWTR) , it is none other than the president of the United States that has lit the fire through his choice for personal dissemination of both news and opinion. It is the politically divided environment of a nation that has provided the necessary life blood. Twitter reported the firm's first quarter results on Tuesday morning. To say that the firm absolutely crushed expectations might not do the firm's performance justice. Earnings per share of $0.37, easily surpassed consensus view of jut $0.15. This illustrates growth in profitability in a period where a decline had been priced in. Revenue showed year over year growth of 18.3%, comfortably printing above projections.

The firm reported 330 million monthly active users. This is lower than the 336 million seen in Q1 2018, but higher sequentially, and also above expectations. This is where it gets fun. Monetizable Daily Active Users (what's important here) printed at 28 million in the U.S. and 105 million internationally. That's 7.6% domestic growth, and 11.7% international growth year over year. Also, very key here, ad revenue of $679 million beat what the street was looking for ($662.3 million).

In other words, the choices made by a controversial leader, and a politically devise environment have made sure that the social media platform provided by this firm has remained relevant, years after the platform had appeared to be in a state of severe decline. The new reality is now being priced in before your very eyes.

Expenses printed 18% higher. That forced operating margin down to 12% from 15%. In addition to that, looking forward, the firm expects to experience second quarter revenue that will print somewhere in a span gaping from $770 million to $830 million. Analyst view had been closing in on consensus of $819 million. This will drag that consensus lower. 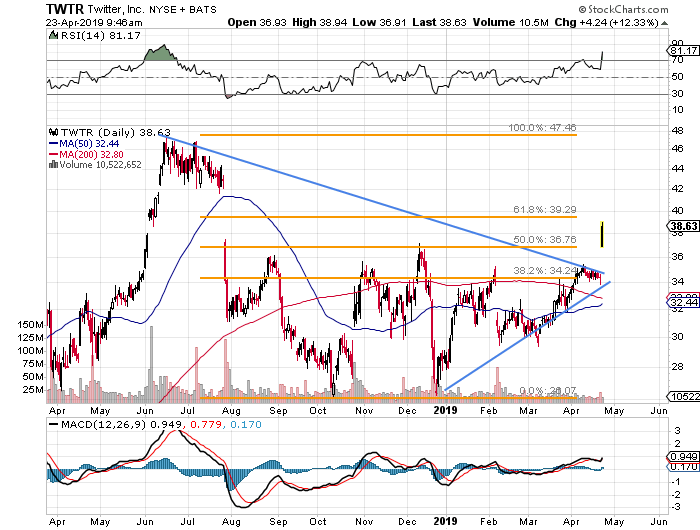 A lot going on here. For one, the 50 day SMA is closing in on the 200 day SMA. A golden cross could further provoke a positive algorithmic response. I am long this name. I am long quite a bit, and my average price is $29 and change. Net basis below $29, so this is my real decision producing home work that I am letting you in on.

I think the Fibonacci retracement level at $39.30 will present as "a Bridge Too Far" today. The closing wedge of lower highs coupled with higher lows has produced this violent move that fortunately is to the upside. Needless to say, the shares have opened above my target price of $36, so I will surely be selling a chunk after this article is published. Do I hang on to some. Yes. Recently made that rookie mistake on the Disney (DIS) trade, though you never look a solid win in the teeth.

I do believe that there is supply at the ready for this stock based on the sloppy basing pattern formed from last August on. Therefore, I will likely peel back 50% of my holdings instead of the usual 12.5% to 25% on a profit taking day.

I do believe in this breakout in Lockheed Martin (LMT) . That's another name that you may or may not be in by my side. I am not taking profits in this one, as I see this as a genuine technical move out of a six month cup and handle formation. My price target for LMT is $375. Am I out of my mind? You already knew that. Raytheon (RTN) reports Thursday morning. Rock on.

Get an email alert each time I write an article for Real Money. Click the "+Follow" next to my byline to this article.
TAGS: Earnings | Investing | Markets | Stocks | Technical Analysis | Trading | Media | Stock of the Day