When "not good" is better than bad. Go ahead, ask me. "Ask what, Sarge?" Ask me why I never ever bet on my favorite teams when they are underdogs. "Okay, Sarge, why?" Simple. Because I never want to feel good when my teams lose. The Jets stink. They always stink. Take the Jets +10 versus anyone. Okay, they lose by a touchdown. I win the bet, even though my team loses. Unacceptable. If I want to gamble, I'll find a game where I have no dog in the fight. This way, my heart stays out of it.

On Thursday night, another one of my favorite teams, the Walt Disney Company (DIS) reported the firm's fiscal fourth quarter performance. Yes, on either an adjusted basis or not, the firm lost money. Yes, revenues absolutely plummeted year over year. No, the firm is not going to pay shareholders a dividend, again. Oh, just one more thing. Disney absolutely crushed expectations. In baseball parlance, they hit it out of the park. Let's check it out.

For their Q4, Disney posted an adjusted EPS of -$0.20. Expectations were for something like -$0.65. Revenue generation decreased by 23.1% to $14.71 billion, beating the street by more than $600 million. The firm's operating loss amounted to $580 million, comparable to an operating profit of $1.25 billion last year, but well ahead of an unexpected operating loss of $854 million. Obviously, with many of the firm's businesses either sidelined or operating at limited capacities, much of what the firm has been doing has been managing costs, while focusing investment aggressively on what has been working, and carefully on what will work again, someday. Cash flow from operations fell only 3% to $1.67 billion, while free cash flow actually increased to $938 million. Let's zoom in for a closer look.

In terms of revenue contribution, Media Networks is easily the firm's largest at this time. This includes Broadcast and Cable Networks. The unit posted sales of $7.12 billion, up 11%, but operating income of $1.86 billion, only up 5%. The firm blamed a tough environment for ESPN for the decline in margin, as almost all sports have played limited schedules and to lower than expected ratings at that. It's true that in a pandemic world, folks do pay less attention to sports, we love them so. I heard on the radio this week that the Lakers had won the NBA title. I had no idea. I asked my sons, also sports fans, if they knew that the Lakers had won. Neither did. One laughed out loud at the thought of watching the NBA. He said nobody his age watches the NBA. I thought about it. I am a Knick fan. I could not name a Knick. In fact, I bet I can't name five active players across the entire league. That hurts ESPN. I just tried. If Carmelo Anthony is still active, I can name three.

Direct to Consumer and International contributed $4.85 billion in revenue, up 41%. Housing the firm's streaming services, this is the firm's growth vehicle and therefore, an area of increasing investment. The unit posted an operating loss of $580 million, improving from a loss of $751 million a year ago. The number that drew the most attention was the 73.7 million subscribers now on board with Disney+, up from 57.5 million sequentially, and well above projections. Hulu subscriptions increased 28% to 36.3 million, while ESPN+ subscribers increased to 10.3 million versus just 3.5 million one year ago. Of course there is overlap, I myself subscribe to all three, but that's more than 120 million subs total. The gap with Netflix (NFLX) is closing rapidly. This unit will remain for Disney the focus for as long as the pandemic cripples other areas of the firm.

Now, for what is not working so well. Parks, Experiences, and Products saw revenue decrease 61% to $2.58 billion, posting an operating loss of $1.1 billion. Studio Entertainment generated sales of $1.595 billion, down 52%, that provided $419 million in operating income, -61%.

The environment remains quite uncertain. Several theme parks remain closed, others operating well below capacity. The firm made clear their displeasure with the state leadership in California. The firm has resumed production where and when possible. CEO Bob Chapek says that more than 100 television projects are currently active. On the movie side, the studios have "restarted or completed production on all projects" that had been impacted by Covid-19. Eight new projects are expected to get underway by early next year.

Obviously, the parks, the hotels, the movies, and the cruise line cannot perform at or above meaningful levels until the vaccines can be distributed widely, thus reversing to some degree, this pandemic. Disney's problem is that what the company does best is sell entertainment and leisure to mass audiences in an era where there are no mass audiences.

I am long the shares of Disney. There is an investor day coming but not right away. We are talking about December 10th, almost a month. I will exit this position probably in its entirety today. With the intention to be long ahead of the investor day. Let me show you why. 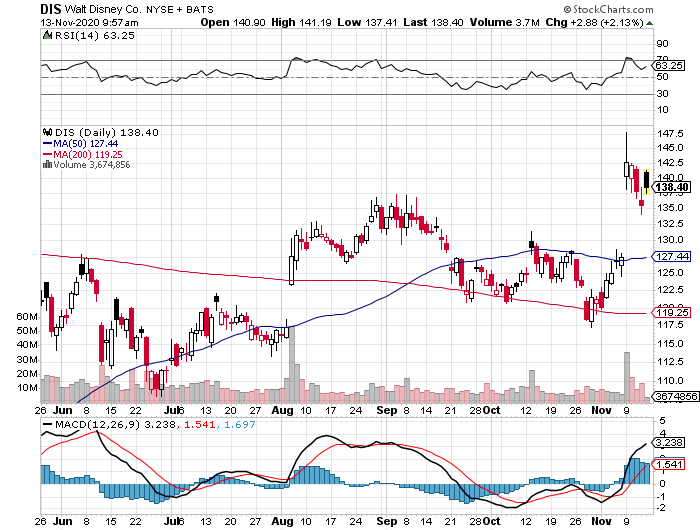 You see that gap created on Monday morning based on Pfizer's (PFE) vaccine news? I think, and I could be wrong, that this gap fills between now and December 10th as the pandemic worsens. My thinking is to buy my position back when it does.

Get an email alert each time I write an article for Real Money. Click the "+Follow" next to my byline to this article.
TAGS: Earnings | Investing | Markets | Stocks | Technical Analysis | Trading | Media | Movies | Sports business | Coronavirus