Hmm...I have already spoken several times. Making clear just how spectacularly I thought that the e-commerce businesses of both Amazon (AMZN) , and Walmart (WMT) had performed, given the circumstances, and as transparent as possible during the height of the pandemic in New York. When paper products were out of stock everywhere, even when food became uncomfortably scarce at the peak, these two businesses above all others, if impossible to fill an order in a timely fashion, at least "ballparked" a date that a consumer trying to provide for a family during an economic shutdown could look forward to. I found some competitors whom I had expected to perform at a level comparable to these two, to lack badly when most needed.

While I may not mention the e-tailers that I felt let me down, I can not disparage Shopify (SHOP) , the cloud-based e-commerce platform featuring small to mid-sized merchants. I never thought to go there. This news that I first saw reported at Bloomberg certainly caught my attention.

It appears that Walmart will partner with Shopify in order to expand Walmart's third-party marketplace. Walmart will try to add 1,200 Shopify sellers to the marketplace (that already has about 45K merchants) this year. There is probably already some existing crossover between the two bases. That said, Walmart is sure that the firm could further penetrate Shopify's base.

While there is no doubt that Walmart has been gaining on Amazon in terms of e-commerce market-share with Target (TGT) breathing down Walmart's neck, there is also no doubt that this remains a tough, low margin business. In fact, Walmart loses money on this side of the business just to stay competitive and Amazon's e-commerce business drives two higher margin businesses, advertising, and Prime subscriptions.

As for Walmart's third-party marketplace site, it has been around for more than a decade if maybe you never heard of it. Obviously, the time to get aggressive had come.

What Is A Trader To Do?

Well, Shopify shares are behaving as if they were fired out of cannon this morning, even as the broader tape shows weakness. SHOP closed on Friday night at $742.58 (+2.4%). I see a pre-opening last sale of $777, or +4.6%. I'm not chasing that. The shares remain, even if well off of their May high of $844, seriously extended from their mid-April breakout from a generous $593 pivot. Sure I could tell you to go buy SHOP and not do it myself because it is expensive, and then claim victory either way down the road. You guys know I tell you what I am doing or thinking of doing. I don't play that game. Yeah, I may trade SHOP in odd lots trying to turn a buck here or there, but I can not invest in the name at these levels.

What I can do is add to my already existing long position in Walmart on broad market weakness. (Here's the part where the guy who just told us how honest he is, talks his book,) I told you Walmart helped feed my family when our backs were against the wall. The stores by me have also been run with military precision. No mask, no entry. Referees in the aisles to make sure the traffic flowed one-way and folks stayed distance. Some folks have told me that this was not the case everywhere, but when New York was driven to its knees, Walmart stepped up. Big time. Eternal respect. 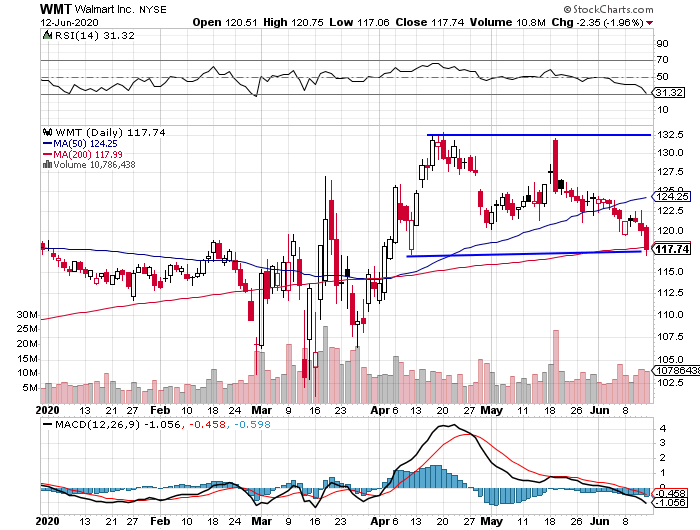 Walmart shareholders wake up at a critical juncture on Monday morning. Readers will note that WMT has more or less been trading sideways since early April. I am going to see this as a basing period allowing shares to consolidate coming out of the pandemic induced surge. The problem now is that these shares need to stop consolidating right here. Should the shares successfully defend the early April support, which just happens to also be the 200 day SMA, I 100% expect to add to WMT this morning. 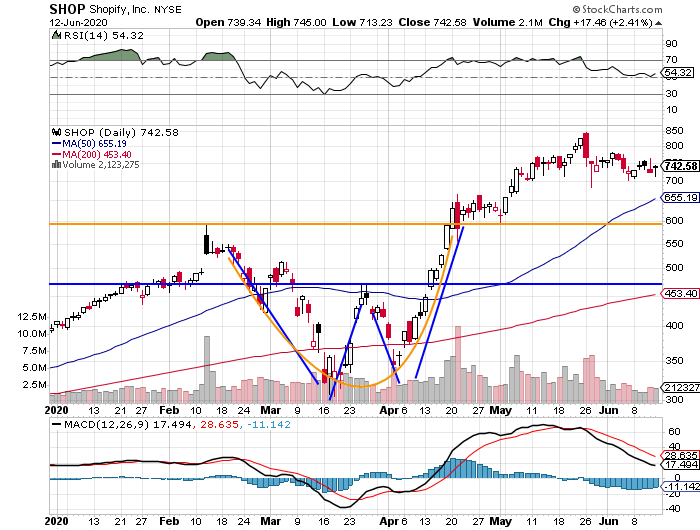 There are two ways to look at recent Shopify history. One way, the yellow cup with no handle provides a $593 pivot. The other way? The purple "double bottom" creates an even lower pivot of $470. Either way, these shares have run way too far. Does this mean I am right? No. There is always something that I do not know, or something that I do not see. This just means that by the metrics that I use that have managed to provide me with a living for several decades now, I can not buy SHOP here. I may short an odd-lot for funzies later today. Depends where the shares are trading.

Get an email alert each time I write an article for Real Money. Click the "+Follow" next to my byline to this article.
TAGS: Economy | Investing | Stocks | Technical Analysis | Trading | Retail | E-Commerce | Coronavirus

Restaurant Stocks Are Leaving a Bad Taste on Their Charts

Three big names -- Chipotle Mexican Grill, Domino's Pizza and Starbucks -- already have lost a lot of ground and could give up more.