Could hardly sleep. How 'bout you? I mean it's easy to merely observe that amid a week with so many balls in the air that on this day.... this day, so many key decision makers will feel the heat in ways that will impact the wealth and well being of hundreds of millions. Actually more than that. How intellectually challenging? For those of us who wade into the melee sword unsheathed on a daily basis, just trying to figure out a way...any way just to capture a living, sure there is pressure. Our families count on us to work harder and work smarter than the field. Beyond our myopic view, now envision, the pressure that comes with the power to err in a way that impacts the populations of not just nations, but a planet. Fear? Never. Uncertainty? Embrace it. Hundred hour weeks with no guarantees. Oh, we are certainly different. So, let's rock.

Potential exists for explosive movement in asset prices over the rest of the week. Always focused upon, but suddenly less so, the core of earnings season will be overshadowed by two-way threats to valuation that will be led unfortunately by keyword reading algorithms. They will move more quickly than will the fastest among you. Understand individual limits for risk tolerance. Locate targets of opportunity. Maintain hedges. Oh, and tape on the foil because today, we fight yet again.

Finally. High level meetings will take place today in Washington, DC between U.S. and Chinese delegations. The U.S. side is to be led by Treasury Secretary Steven Mnuchin and Trade Representative Robert Lighthizer, while the Chinese side will find leadership in Vice Premier Liu He. Will there be progress? Just a couple of days after the U.S. Justice Department charged telecom giant Huawei with the crimes of fraud and trade theft? China has already proposed vastly increased purchases of U.S. supplies in the agricultural and energy space. The stated intent is to clear the trade gap with the U.S. by 2024.

Not only does the U.S. side find that this offer would be difficult to enforce, but the greater sticking point would seem to be the theft of intellectual property rights along with unfair, anti-competitive trade practices. My guess is that the U.S. might even be willing to give something up on trade, if honest progress could be made along those fronts. Hence, why Huawei matters significantly.

The deal for me is this. I do not expect real progress to be made this week on conditions between the U.S. and China. I think every effort will be made to paint a rosier picture coming out of these meetings than might be realistic given that national interests here are not necessarily aligned on these specifics, yet in the end.. the two nations must understand their symbiotic relationship. Best case... a deal that allows both sides to claim victory while providing enough for global economies to slow their aggregate descent. Worst case... increased tariffs and a cold war that lasts half a century. Obviously, as a trader I prefer the former. As an American, I will adapt to all conditions, overcome all obstacles, and ultimately win in all environments.

My guess is that many readers will remember the Boogaloo. For those that do not, this was popular dance in New York City in my youth made famous by James Brown among others. The dance was very smooth looking, and quite honestly has been witnessed, but never attempted by your author. Your author is not the only one that might appear less than smooth, while also clamoring for your attention on this day. Enter the FOMC policy decision, and then enter a half hour later... the plate spinners, the jugglers, and the clown car.

I would venture that when Fed head Jerome Powell decided to do a "dog and pony" show after each and every planned policy decision (Decisions used to sometimes be made unplanned, imagine what that would do.) that he imagined that he could just state his honest opinion, and move on. Little did he know that he would have to learn to finesse his words. After some serious missteps, my last guess would be that he has had to upgrade his public game in a big way.

As always, guidance is key. Presentation also key. I think we can all agree that there will be no increase made to the Fed Funds Rate today. As of December, the implication was that there will still be two more increases made to this benchmark in 2019. The official policy statement has to add flexibility to the phrase "further gradual increases", and Powell has to back that flexibility up convincingly with the press. Of course, without a rate hike likely today, or even soon with delays having been made to several macro-economic data-points (and weakness in many others, see housing), the focus on this Wednesday afternoon will fall to balance sheet management.

I think it common knowledge at this point that the attempt to whittle down the balance sheet at the pace of $50 billion per month was unfortunately too aggressive in proportion to the speed at which the massive size had been built. Obviously, both "Operation Twist" and "QE3" were perverse, ill advised. and amateurish moves that left the balance sheet in the shape it is, while doing semi-permanent harm to the yield curve, price discovery and the ability to understand and assess risk at both the household and corporate levels.

For those that wonder, I am not a dove. Far from it actually. I strongly believe in the quantitative tightening program, but just as with the headline making Fed Funds Rate, this program is a form of normalization toward tighter monetary conditions, and thus.... must be just as flexible. I would cut the pace in half for now, but I am in charge of nothing. I expect Chair Powell to leave the pace of this tightening where it is, and try to get away with alluding to a data dependent agility in this space. My thought is that the Fed must be not data-dependent, but anticipatory, but I do understand that this would be asking a lot of a group not known for thinking on their feet. The balance sheet from this point on, after the December liquidity debacle must be mentioned in every policy statement. No more of this background nonsense. We're not stupid, and a lack of transparency in this space is no longer acceptable. Got it?

Generally speaking, Apple (AAPL) CEO Tim Cook did a great job of managing expectations ahead of time. I am long the shares and this is my take. Very briefly. Obviously the success of the firm's on-line Services is key. Wearables are also hot. The firm has a bright future and is evolving precisely in the way it needs to. Those services as a group (iCloud, Apple Music, etc.) saw revenues increase by 19% on margins that were much higher than optimistic investors hoped for. Wearables, Home and Accessories as a group saw revenue pop to the tune of 33%. iPhones? 15% decline. The problem is that while the firm evolves into the next version of itself, iPhone at these decreased numbers... are still nearly three times larger than Services and the Wearables groups combined.

What does that mean? This means simply that the firm experienced a 5% decline in revenue for the fiscal first quarter, and expects to see a decline somewhere between 3% and 10% for the second. Long, like me? I'm going to sell something today. Flat, but want in? My thought is that this morning might not be the best timing for entry. Hanging in their long-term? Hedging oneself or at least some net basis manipulation would seem wise, at least to this guy with more than three decades of experience doing this. Looking to get short? Wait at least until the analysts shut their collective traps for a day or two.

Wednesday evening will bring out the heavyweights. We'll hear from Facebook (FB) , Microsoft (MSFT) , Tesla (TSLA) , and Visa (V)  , among others. One name that has been spoken of often at the analytical level will not make the headlines like these others will, but bears some watching. SeviceNow (NOW) is a significant player in the cloud space. No need to add there? I hear you. Perhaps broaden the exposure then through a mini-rotation.

Over the past few weeks, NOW has been mentioned by analysts at Morgan Stanley as a "disruptive share gainer", as well as by analysts at Piper Jafferey, at RBC Capital Markets, and at Wedbush Securities as a potential target among others for a larger business looking to expand or strengthen their business cloud space. Let me think. Amazon's (AMZN) is number one. Micorsoft's Azure is right behind. International Business Machines (IBM) has made the leap with RedHat (RHT) . The name most often mentioned as far as I can see would be Alphabet (GOOGL) . Now, speculation like this is never a good reason to invest. Remember, Morgan's words... disruptive share gainer. Hmm. Growth expectations from this year into next are impressive. 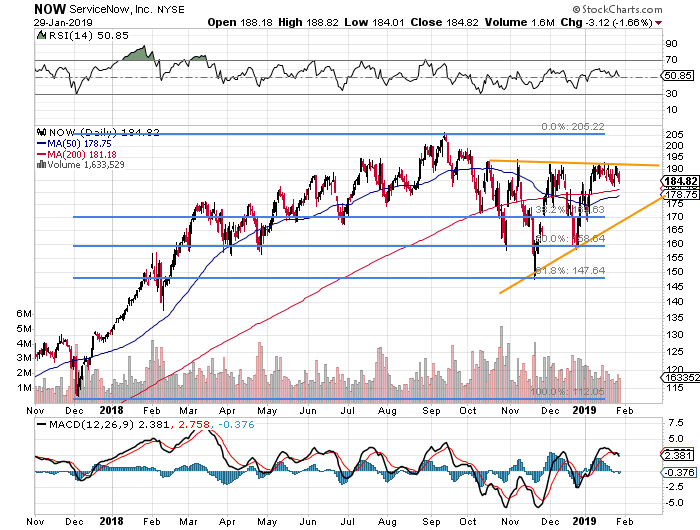 First thing that I notice is the nearly perfect Fibonacci retracement that found support in mid-November, and then a series of higher lows that run right into... what's resistance called when it works like 10 times in a row? I don't know, but something has to give here. The 50 and 200 day SMAs appear to be setting up the potential for a golden cross should tonight's earnings go well. Am, I truly convinced? I never am, but I do see the set-up.

I expect to leg in at about a one-eighth stake this afternoon. I expect to see revenue growth north of 31% this evening, but guidance as always will take a lead in priority over performance. Hard to say where the shares will trade at that time. My thoughts would be to sell covered calls at a strike premium of about $7.50 simultaneous with puts running perhaps a little cheaper than that just in case. The effort will be to lower net basis by a rough $5 ahead of tonight's digits. Target Price? I think the name can move above the September $205 highs, especially if any additional value is added on spec.

Get an email alert each time I write an article for Real Money. Click the "+Follow" next to my byline to this article.
TAGS: Earnings | Economic Data | Investing | Markets | Options | Stocks | Technical Analysis | Trading | Semiconductors & Semiconductor Equipment | Technology | Market Recon