Take a look at the materials provided. Take a look at those numbers. Costco (COST) put together a very nice fiscal fourth quarter. On this point, I don't see reason for doubt. Why was the stock trading lower overnight? Maybe the numbers were simply baked in. Costco does report on monthly performance. That makes surprising on comparable sales, or revenues very unlikely. Is the stock expensive? At 37 times forward looking earnings, this is a possibility. Key competitors such as Walmart (WMT) ... 27 times, Target (TGT) ... 25 times, and Amazon (AMZN) at 57 times are not truly comparable. Costco is a club... a club you pay to join in order to buy goods in bulk at reduced prices. Walmart has such a club, but this is not their core business. Amazon has a customer loyalty program, but does almost all of its retailing digitally. There is no apples to apples comparison, and Costco is very good at what they do.

For the quarter reported, Costco put EPS of $3.13 to the tape. This earnings number easily beat consensus view. Revenues were almost spot on at $52.28 billion. Depending on who you follow, this was either a very slight beat or a very slight miss. I see it as hitting consensus. As I said, they guide us to this number on a monthly basis. This is baked in, and should not have surprised traders. There was a somewhat interesting performance in those also already mentioned comparable sales. Up 11% in the U.S., up 9.1% in Canada, and up 16.1% elsewhere. These numbers turn into +13.6%, +12.6%, and +18.8%, through the magic backing out currency exchange rate fluctuations as well as changes in gasoline prices. Huzzah. The total comp number that we go with after all of that math is just about +14%. Well above the street's expectation, which I said should not happen. Guess the math was hard.

Notice I said somewhat interesting. That's because e-commerce stole the show, as it also has for the big box competition. E-commerce sales grew 90.6% for Costco for the period, adjustable to 91.3% using the same math as above. I will say that personally, that months ago I had noted that as a sick man running a household in need of such services back during the height of the pandemic in the New York area, that Costco was not keeping up with demand nearly as well as was either Amazon or Walmart, all of whom were stressed. This has been corrected. Costco is once again competitive in this space in my own myopic view.

There is some chance that traders disapprove of the pandemic related expenses mentioned by the firm on Thursday evening. The firm notes a spike in such spending to $281 million. They made the stores safer. I have been in them. The difference is notable. Checkouts are spaced better and there is usually a quarterback directing traffic. There are also plexiglass partitions where they are needed. In addition, the firm has paid their employees better. Ever hear of anyone leaving Costco? I know a few of the folks that work at the one near me. They have all been there for years. These are expensive measures in the moment. They are positives down the road. 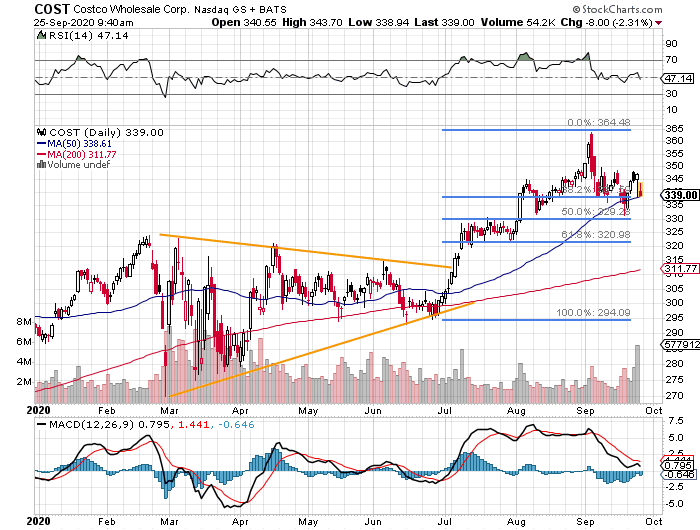 This is one stock that I have traded often and traded well. I have no current position now, though I had been long the name late this summer. I am looking at the dip as a potential buyer. No interest in shorting the name on this report.

Readers will note the spring into summer series of higher lows coupled with lower highs that produced the July breakout. Readers will also note the near perfect 50% Fibonacci retracement of that move in mid-September. We now turn our attention to the 50 day simple moving average at $338.61. In theory, this is where I want to buy a few shares Friday. Given that I am writing this note, and I expected to write this note, I must wait until publication. To do otherwise would be unethical in my view. As I write this, the shares are trading right where I want them.

Why buy Costco at a time when folks are thinning out portfolios? Simple. Not a tech stock, but like tech stocks, this company is run well, has fixed what was broken, will perform in a pandemic environment, and will perform even better in a post-pandemic environment. I am not afraid to start a small position today with the intention of building a mid-sized tertiary spot in this space for me. I still prefer Amazon and Walmart, but there is room for three. Maybe four. Target is certainly no slouch. $338 or better. That's my opinion.

(Costco and Amazon are holdings in Jim Cramer's Action Alerts PLUS member club. Want to be alerted before Jim Cramer buys or sells these stocks? Learn more now.)

Get an email alert each time I write an article for Real Money. Click the "+Follow" next to my byline to this article.
TAGS: Earnings | Economy | Investing | Markets | Stocks | Technical Analysis | Trading | Retail | E-Commerce | Coronavirus