Reacting well... at least early on Wednesday morning. I really was not sure at all that the stock would tick higher like this. Kimberly-Clark (KMB) reported a very solid first quarter. Adjusted EPS of $2.13, which not only was a solid beat, but amounts to earnings growth of 28%. KMB just does not see earnings growth like that. Revenue growth printed up 8.2%, at $5.01 billion, which was also a beat. Adjusted gross margin spiked. About the quarter, CEO Mike Hsu, from a statement said, "A combination of increased consumer demand for our products and strong execution by our teams is reflected in our first quarter results." Huzzah.

So, why am I surprised that the shares are acting so well? A number of reasons actually. I will get to that. On the surface, performance is outstanding. Under the hood, even better. Organic sales growth printed up 11%. Sales of tissue increased 13%. That's just it, but it's not just that. Kimberly-Clark is the name behind the Kleenex, Cottonelle, and Scott brand names, as well as Huggies diapers and Viva paper towels. Basically, Kimberly-Clark sells the stuff that people hoard when they are either scared, or find themselves going into a prolonged period being stuck inside their homes.

Whom among us has not wondered when again they will find toilet paper, or paper towels either on the shelf or available for anything close to short-term delivery at e-commerce websites such as Amazon (AMZN) or Walmart (WMT) ? I have orders placed a month ago that are still a month out from scheduled delivery... if I dare trust that they are delivered on time.

From my perspective, not from my experience because I have never been through anything like this, and neither have most of you, I would think that after a period of hoarding, once the panic subsides, that there would most likely be a period of reduced demand for those items that had been out of stock, as at least some folks are 'set' for now. Then again, those who missed out on the whole hoarding thing, might just be driven to build up their own household "strategic reserves" for a number of items that they had wished they had in inventory ahead of the economic lock-down.

Why am I surprised at the early morning strength in the shares of KMB? Management at Kimberly-Clark understands the first quarter performance, and understands that future consumer behavior like that is now unpredictable. Kimberly has now suspended its forecasts for the full year. The firm also suspended the existing share repurchase program until at least the end of the second quarter. The firm had repurchased 1.6 million shares during the first quarter amounting to $224 million spent, just an FYI. In addition, the firm has also extended the global restructuring program launched in 2018 out into the end of 2021. The company expects to see total charges at that point to end up toward the higher end of a $1.7 billion to $1.9 billion range. 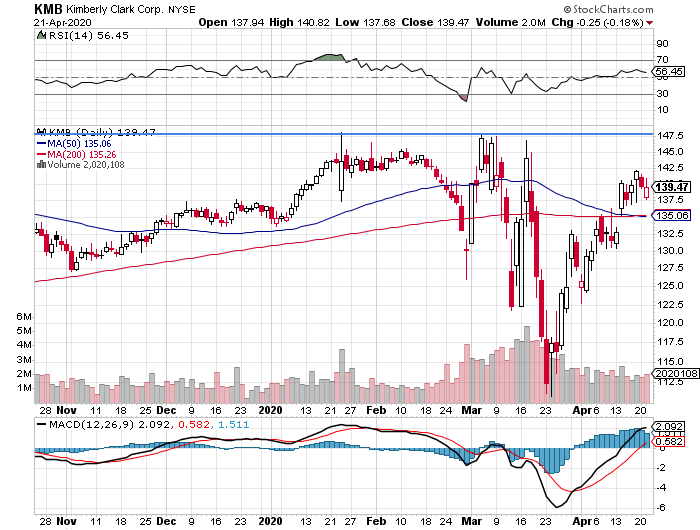 If you have made it this far, you have probably already figured out that I do not have a financial interest in this name at this time. I see the shares trading around $142 prior to Wednesday's opening bell. Investors should be alert to some natural resistance that could appear just around $147.50, as that spot has halted rallies in this name roughly six times since the New Year started, and five after we as a nation became fully aware that we had a serious problem.

I am thinking that I probably take a pass on this name today. That said, should the shares rally on a broader market rally (assuming that actually happens, which is something we generally can not predict from one hour to the next these days), I would probably in normal times look to short the rally in expectation of a later move back toward the 50 day and 200 day SMA that are currently running together.

Being that I am not brave enough to short any equity right now, and that these are abnormal times, I would be more likely to price out a $145/$140 bear put spread, and if I could not get long that spread for less than a net debit of $2, just take a walk instead.

Get an email alert each time I write an article for Real Money. Click the "+Follow" next to my byline to this article.
TAGS: Earnings | Economy | Investing | Options | Stocks | Technical Analysis | Trading | Household Products | Consumer Products