Thus far, the early takeaway from earnings season is a lot of hurry up and wait for me. Initial reactions on the biggest names have skewed slightly negative although I'm keeping my eyes on the cloud names and the "disruptors." We've already seen one former disruptor, GrubHub (GRUB) , getting turned into grubs, which appropriately enough, are a favorite food of hogs. Any hogs that stuck around in that name certainly were slaughtered.

The response to Tuesday's afternoon report from Advanced Micro Devices (AMD) has surprised me a bit, especially given its proclivity towards big moves post-earnings. While I don't want to judge based on headline numbers, I will expect certain reactions. When I saw AMD's third-quarter simply met expectations and fourth-quarter guidance was a tad below expectations, I anticipated a big move lower. Instead, the first ticks came from buyers pushing shares above $33. The move didn't last, but a drop under 2% as we approached midday is much better than I thought we'd see.

The company reported $0.18 earnings per share on $1.8 billion in revenue, right in line with the street. I did see revenue estimates at $1.81 billion, but anything at 0.5% or less when we're in the billions should mean little to investors. This revenue number meets expectations. Next quarter guidance of $0.30 per share on $2.1 billion in revenue comes in a penny light on EPS and $50 million short on revenue; however, management added a plus or minus $50 million to that $2.1 billion estimate, so they could still meet. That also means they could come in short by roughly 4%, a more meaningful miss than 0.5%.

Bulls focused on the highest quarterly revenue since 2005, highest gross margins since 2012, and the annual revenue growth close to 50%. Sequentially, AMD should put up a number between 14% and 19%, also impressive. EPYC processor revenue and unit sales jumping more than 50% have paved the way for AMD. This was the first full quarter of 7nm Ryzen, Radeon, EPYC processor sales, so the huge leap in sequential growth as well as EPYC numbers shouldn't be a surprise, but anticipating those numbers is one thing, actually seeing the proof is another. AMD gave the market proof of demand for its newest products.

Alphabet (GOOGL) , Twitter (TWTR) , Cray (CRAY) , Dell (DELL) , Lenovo (LNVGY) , Hewlett Packard Enterprise (HPE) , IBM (IBM) , and Nokia (NOK) are all names that have bought into EPYC. And those sales are helping AMD post strong gross margin numbers, but game consoles disappointed in Q3 and appear to be a drag in Q4 as well. Unfortunately, we're plunged into a post-earnings no man's land. The stock hasn't seen a move this small in years. Over the past 18 months (6 reports), AMD has drifted higher in the three weeks following the first post-earnings close; however, the ride in between day one and day 21 has been bumpy. The current straddles are pricing an 8% move over the next three weeks while the straddle set to expire a week from Friday is pricing a move around 5.6%. I actually think the shorter straddle has the better potential to pay out. 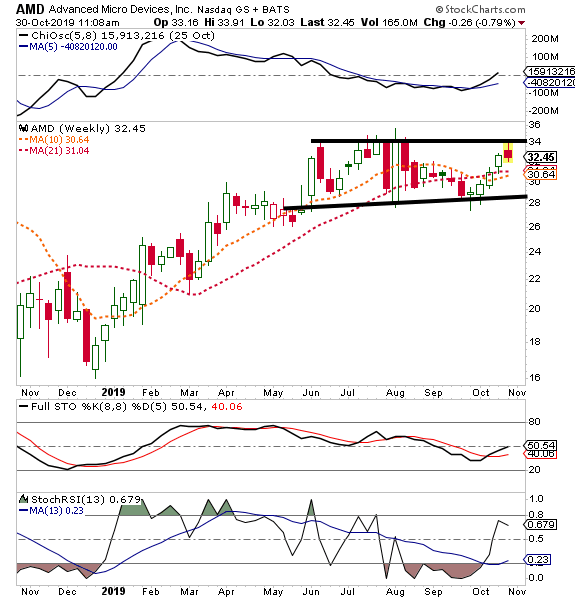 In terms of the chart, it really is a hurry up (get to earnings) and now wait. Bulls want to see AMD close above $34 for the week, while bears need a close under $28 to really get a break. Overall, the story remains strong enough that I'd be a buyer on the close above $34 or a pullback that hit $28-$29, but did not break below, even if that means buying on the slight upswing back through $30. Buying today puts resistance $1.50 away and support $4.50 below. I don't love risking 3x here to make 1x on a very clear pattern which means we should wait for a trigger. I believe we'll get one soon enough.

Everyone wants a flush in the market, but here's why they aren't getting one.