Hope you read...Monday's Market Recon. Not boasting. Not at all. I did explain in that note that I had been getting long the shares of JP Morgan (JPM) for a couple of weeks on the belief that the firm's quarterly provision for credit losses could print substantially below consensus view. Every squirrel finds an acorn, even in the dark. Sometimes. A great quarter? No. Not by JPM standards. Relative to where we are in this country, this pandemic, this economy? Certainly. JP Morgan outperformed expectations across a number of key metrics. I have said it before. I don't really like the financials. I am long but one major bank (for now)... this one, the best in class.

JP Morgan Chase reported third quarter financial results on Tuesday morning. The firm posted GAAP EPS (the real kind) of $2.92, crushing expectations of $2.24. Even including the equivalent of $0.17 per share's worth of legal expenses. Some firms might have taken an approximate $524 million adjustment. Not JPM. The firm also shows group revenues of $29.941 billion. That number beat consensus by almost a cool $1 billion, but still prints as a year over year decline (-0.3%). Though there are some boast worthy numbers within the numbers, the provision for potential credit losses is simply what stole the show today.

Seasoned readers can skip most of this paragraph. New kids... school circle, everyone in front... take a knee. Banks set aside a given amount every reporting season to cover their expectations for "bad loans" or non-performing credit. This is based on credit conditions, and the state of the economy, both domestic and global. For the second quarter, JP Morgan had to set aside $10.473 billion. Obviously, the third quarter was better for the entire nation than was the second. Expectations were for something below $3 billion. I wrote to you yesterday, saying that I need to see a 70% or greater sequential reduction on this line. Well, weren't we pleasantly surprised when JPM printed $611 million on that line this morning. Whoa baby.

Division across divisions, or even within divisions was mixed. The Consumer and Community division is a reflection of the real economy. That group contributed revenue of $12.75 billion, which was +4% q/q, and -9% y/y. Deposits, by the way, were up 28%, leaving JP Morgan Chase as the nation's top dog in terms of domestic retail deposits. First time ever.

Corporate & Investment Banking was down big q/q at -30%, but still up +21% y/y basically on the trading opportunities that were just not there in a more sane year. Trading revenue, which is part of this division, showed revenue of $6.6 billion, +29% on the fixed income side and +32% for equities markets.

What Else You Need To Know

The firm still can not repurchase its own shares as per the Federal Reserve's guidelines. CEO Jamie Dimon does indicate that should economic conditions improve and the Fed loosen restrictions on large banks that JP Morgan could resume this program as soon as the first quarter of 2021. For now, for investors, this remains a negative. Tangible book value per share is $63.93, meaning that JPM trades at close to 1.6 times tangible book. Undervalued? probably, but not relative to the industry. The industry, regardless of how they make money, regardless of how creative they can become, the industry is still valued through the prism of net interest margin. Net interest income was down 9%. Just sayin'. 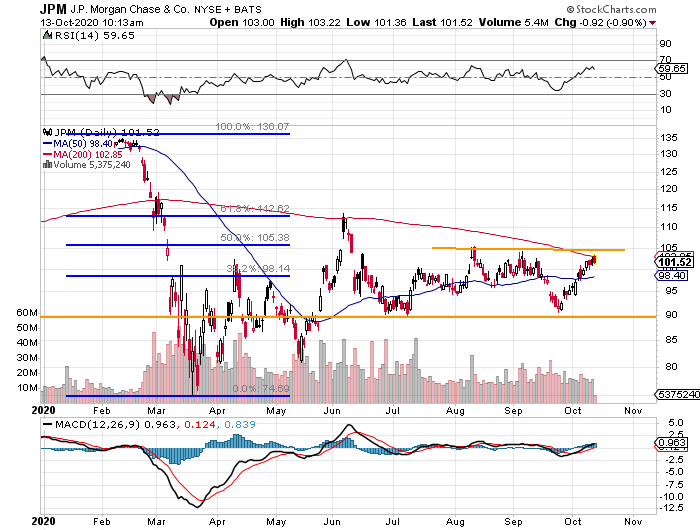 The shares appear to have hit resistance at the 200 day line. If you are a trader, this is where you say "sold" after holding the past week or two, and move on. If one is building a position, the target is $110, the add is $98. The absolute panic point is $90. You want to be long the shares when the company starts buying them again. You do not have to be long until then. This one trades in a range. So can you.