That was... to put it mildly, some letdown. I came into the late Thursday afternoon release of Amazon's (AMZN) Q2 financial results with a medium-sized position. I come before you now, with a much larger position after an after-hours/pre-opening/shortly after opening spending spree. Not that I expect an immediate rebound, quite the contrary, as Wall Street reacts and adjusts. What prevented me from taking profits prior to the release was the misled hope that at some point somebody at Amazon mentions a stock split.

Obviously, such an idea was not to the liking of founder and former CEO Jeff Bezos. Perhaps current CEO Andy Jassy is not into such an idea either, or perhaps he needs to be at the job a little longer. Either way, it would have been nice to see Jassy break with the Bezos tradition of not appearing at earnings calls. Just the opinion of one man, but I like to hear the CEO's voice, especially when the market takes the stock out to the woodshed.

By now, you all know that Amazon posted fantastic profits on disappointing revenue built upon a number of disappointing metrics. What is simply amazing is that Amazon missed Wall Street's estimates, not their own guidance. The firm told us exactly where revenue was headed, and they nailed it. This is not on Amazon. They told us the truth ahead of time. This is on the community of sell-side analysts who missed up and down on a long list of numbers. Let's get after it.

For the firm's second quarter, Amazon reported EPS of $15.12, which crushed expectations. Revenue generated over the three months came to $113.1 billion, up 27.2% year over year, but almost $2 billion below consensus view. It gets worse. Operating Income landed at $7.7 billion which missed estimates of $7.8 billion. Free Cash Flow over the trailing 12 months now stands at $12.1 billion compared to $31.9 billion for that metric over the trailing 12 months one year ago. The $113.1 billion revenue print includes a favorable $2.5 billion impact from currency exchange rates. Less that impact, sales printed 24% higher, not 27.2%.

Online Stores. Revenue of $53.17 billion, +13%, below expectations. The second quarter was one of increased economic reopening. As vaccinations increased, and the virus decreased, people moved about and relied less on e-commerce. This segment is a lower margin business for Amazon, but drives lucrative ad sales for the firm. My gut feeling here, and this is just me... is that the Delta variant could end up reversing, to some degree, this underperformance as regions (nations) move back into various stages of reduced human interaction later in Q3.

Third Party Sellers. Revenue of $25.085 billion, +34%, above expectations. Higher margin than Online Stores. The out-performance is surprising given that one would think the two would move more inline with each other.

Amazon Web Services. Revenue of $14.809 billion, +37%, above estimates. This is maybe the most important segment within the firm, as this is the current driver of growth, high margin growth at that... and growth is still accelerating.

Subscription Services. Revenue of $7.917 billion, +28%, inline with estimates. This is the home of Prime membership, as well as Prime Video, Amazon Music, Audible, as well as a number of other businesses. This is also key. Recurring revenue. Still growing nicely.

Physical Stores. Revenue of $4.198 billion, +10%, above expectations. This is for the most part, the Whole Food grocery chain, which in my opinion came through with flying colors during the height of the pandemic.

Other. Revenue of $7.914 billion, +83%, beat expectations. This is more where advertising sales are booked than anything else, and those sales are driven by other parts of the business.

This is why the stock is trading so much lower. The firm certainly laid out what looks to be conservative guidance moving forward. Then again, that's what half of Wall Street probably thought about the firm's Q2 guidance and that guidance was spot on. For the current quarter, Amazon sees net sales of $106 billion to $112 billion (growth of 10% to 16%). This is well below the $119 billion that Wall Street had in mind. The lower growth rate is, in my opinion, understandable given that the firm is lapping what was an incredible year of growth where the public largely relied on the firm for everything. Operating Income is now projected by the firm to land in between $2.5 billion and $6 billion, with estimates from the sell side up over $8 billion. This guidance does assume that the firm spends $1 billion on COVID related costs.

Okay. There are too many analysts opining on Amazon today for me to go over each one with ending up copying something that resembles the Dead Sea Scrolls. We'll keep this only to those analysts rated at five stars at TipRanks and we'll try to aggregate their opinions. There are some price target reductions among these opinions, but nobody jumped out a tenth story window.

I have found 17 five star analysts that have reacted to Amazon's earnings since last night. All 17 still rate Amazon as a "Buy" or their firm's equivalent. The average target price, after reductions across the group, is now $4,263. You'll recall that my target price has been $4,200, so even if left unchanged, I am below the middle of the pack. The high price target is $5,000 (Shyam Patil of Susquehanna) and the low is $3,800 (Youssef Squali of Truist). 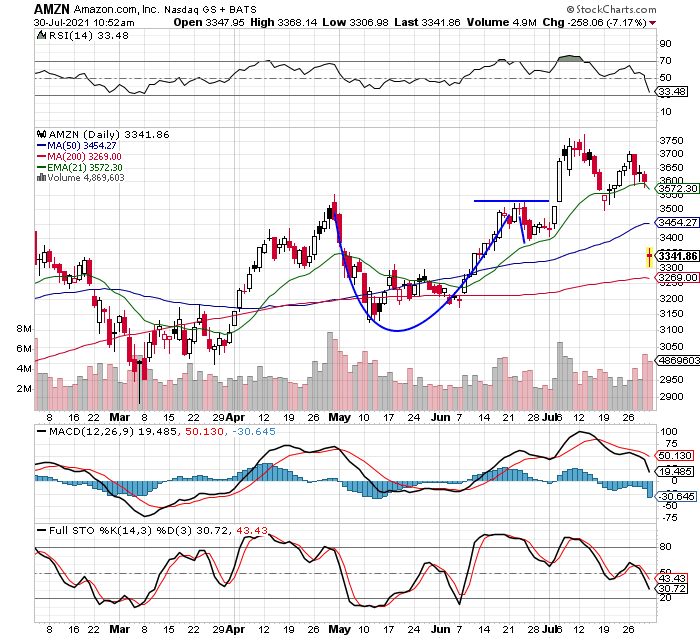 You know what I always say about gaps, right? Well, that's one heck of a gap. Readers will see that the pivot off of the cup with handle through May and June worked well as support earlier in July. That was before the stock broke. Relative Strength is very close to indicating that Amazon is oversold. The Full Stochastics Oscillator is not quite there yet, but is closing in. As for the daily MACD, the nine day EMA is now negative, but the 12 day EMA and 26 day EMA still have some adjusting to do.

Add: Right here. Been doing it all night/morning.

Get an email alert each time I write an article for Real Money. Click the "+Follow" next to my byline to this article.
TAGS: Earnings | Economy | Investing | Markets | Stocks | Technical Analysis | Trading | Analyst Actions