Before we get excited, Illumina (ILMN) does not report for another two and a half weeks. At least now we should not be surprised. We all had our eyes on one ball, in the air, while the juggler was actually doing amazing things with his hands just out of our sight. The story really begins back in September. Big news! Illumina, a firm focused on large scale analysis of genetic variation and biological function, which is huge right now for obvious reasons, to acquire GRAIL, a healthcare company more focused on the early detection of multiple cancer types in a cash and stock deal reportedly worth roughly $8 billion. The deal already had the approval of both boards involved.

Fast forward to just a week ago. The FTC (Federal Trade Commission) filed a complaint to block this deal alleging that the proposed merger would diminish domestic innovation in MECD (Multi-Cancer Early Detection) testing. The Commission in a 4-0 vote authorized its staff to seek a temporary restraining order preventing the firms from moving forward with their plans. The stock sold off 6.6% the day that news broke.

Just a day after the FTC took action, so did very highly ranked (5 stars at TipRanks, number 77 of over 7,400 analysts ranked) Max Masucci of Canaccord Genuity, who upgraded the name to a "Buy" from a "Hold", while lifting his price target to $445 from $410. Masucci allowed for COVID-related uncertainty, and cited a brighter post-COVID future for the firm as patients with non-COVID related health issues resume addressing these issues. Masucci also opined on the FTC challenge, referring to the proposed deal as a vertical merger of two companies not in direct competition. Hmm. Who do you think probably better understands this business... one of the very best analysts on the entire street or the FTC? Eggsactly.

Illumina let the street know ahead of earnings that the firm now expects to report Q1 2021 revenue of $1.09 billion, well above the $925 million that the community of sell-side analysts is looking for and good enough for year over year growth of 26%. I see a quarter in 2017 and another one in 2018 where Illumina grew revenue of nearly 26%, but nothing close since. For fiscal 2021 in its entirety, Illumina expects revenue growth to stay right there, in a 25% to 28% range. The growth is across the board, from nearly astounding growth in sequencing instrument sales growth to healthy growth in both sequencing consumables and sequencing itself.

The stock took off overnight, and shortly after the opening bell, I saw the shares up 8.8% for the day so far. 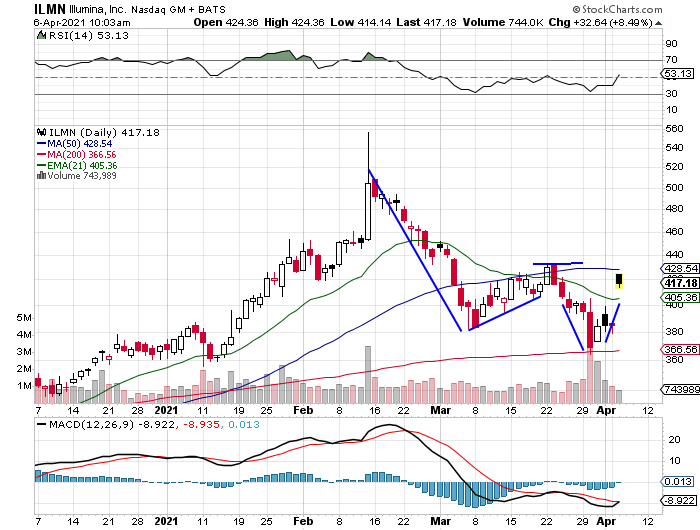 What I see here is what now looks loosely like a double bottom pattern with a pivot of $432. Relative Strength still has plenty of room to run, and the daily MACD looks poised to send a bullish signal. The only thing that overtly sticks me in the back is that gap. The high on Monday was about $388, and the low so far on Tuesday was close to $414.

Now, gaps don't have to fill, but they usually do, and that is one big gap with earnings due on Friday, April 23rd. This is going to be a risky period for the equity. I don't see any way around that.

Note: Profit is capped at 22% through January (9 months)

Get an email alert each time I write an article for Real Money. Click the "+Follow" next to my byline to this article.
TAGS: Mergers and Acquisitions | Investing | Markets | Stocks | Technical Analysis | Trading | Biotechnology | Analyst Actions