I was in the back of a car just a little while after laying out some trading ideas on financial television. I was conversing with my lead trader pal. I saw Nvidia (NVDA) shares move before I saw the numbers. Ahh. Relief. Those that have been with me a little while know I was caught writing puts against this name back in November of 2018. That was a face-ripping experience that would require the best of my risk management capabilities. I accepted delivery of those shares back then rather than take a loss, and ultimately put that one in the win column but that was absolutely no fun at all, and took months to fix. Ever since, I hold my breath when Jensen Huang goes to the tape. He has not let me down since.

On Thursday evening, Nvidia posted the firm's fourth quarter financial performance. The firm printed adjusted EPS of $1.89, earnings growth of an incredible 136% after four consecutive quarters of earnings contraction. Then number easily beat expectations. As for revenue, Nvidia generated $3.11 billion in sales, +40.7% year over year, also a comfortable beat. As we get into the guts of this report, we'll see that while Nvidia is executing exceptionally well coming out of a difficult period, that there does remain some forward looking risk, but in spots where Nvidia is performing well they are simply "crushing" it.

For this quarter, the firm drew adjusted gross margin of 65.4%, up 3% sequentially, and up 41% from a year ago. Adjusted operating expenses increased 5% q/q, and 7% y/y, while adjusted income grew 6% q/q, and sit down... 155% y/y. As for the firm's business lines, Gaming remains the largest driver of sales, coming in at $1.491 billion, an actual miss of consensus, and a decrease from Q3, but still growth of 56% over last year's comp. It was the second largest segment, the Data Center, where Nvidia hit the ball out of the park. The Data Center put sales of $968 million to the tape, obliterating expectations of $826 million. Readers will note that the firm's growth in both gaming and server chips has given lift to another one of our favorites on Friday morning, namely Advanced Micro Devices (AMD) .

Among "smaller", but not quite "small" business lines, Pro Visualization (+13%) also beat consensus, Automotive missed small, as OEM (original equipment manufacturer) & Other (+31%) easily beat what the street came in looking for.

The firm's forward guidance is both positive and thoughtful. For the current quarter, Nvidia expects to see sales of $3 billion, plus or minus 2%, That's a bit better than the $2.85 billion that the industry had been looking for. The firm expects a repeat performance of that 65.4% gross margin, plus or minus 50 basis points, also better than expectations. Nvidia also guided expenses below the street. Now there is risk.

This guidance includes a $100 million haircut to allow for Q1 impact related to the outbreak of Covid-19 in China. The firm also has not included any contribution at all from the pending acquisition of Mellanox Technologies (MLNX) . That deal had been expected to close early this year (2020). The deal will certainly be accretive to performance. However, with approval still required from Chinese regulatory authorities, timing this event remains unpredictable.

The delay in this deal has impacted cash returned to shareholders. The firm paid $98 million in cash dividends in Q4, but has stated that the share repurchase program is on hold indefinitely until the Mellanox deal is completed.

Opinion has been coming in fast and furious since last night. I have at this point noticed 14 industry analysts make public comment since these numbers were released on Thursday night. All 14 are rated at a minimum of four stars at TipRanks. Ten are rated at a full five stars. Of those 14, there are 13 Buy (or the equivalent) ratings. There is one Hold rating. There was one initiation, as 13 increased their target prices (even the Hold). The average target price of this group is $311.28, with a high of $330, and a low of $285 (that was the Hold). 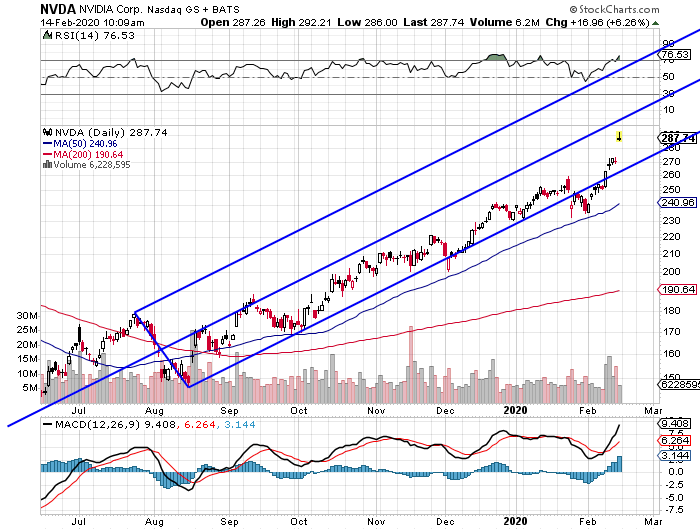 Readers will note that NVDA has easily regained trend, and in fact approaches the central trend line of our Pitchfork model, as Relative Strength and the daily MACD both signal a potentially overbought condition.

Pulling a saved chart out of the archives, one sees that these shares have now gone well beyond the cup with handle breakout of late summer 2019, and now approach a 100% retracement of the late 2018 selloff. The shares now trade at an incredible 19.1% premium to their own 50 day SMA. For comparison, the Nasdaq Composite now stands 6.3% above the 50 day SMA for the index.

What I Am Doing

I came into this week with a target price of $265. I held off making a sale in front of earnings, but at $287 I am required by my core code of discipline to make some kind of sale today. The last thing I want to do is allow myself to squander a great victory in its entirety through a lapse in what has worked for me since the beginning of time. I will then increase my target price for the balance of my long.

Add: Not around here.

Get an email alert each time I write an article for Real Money. Click the "+Follow" next to my byline to this article.
TAGS: Earnings | Investing | Stocks | Technical Analysis | Trading | Semiconductors & Semiconductor Equipment | Technology Hardware & Equipment | Stock of the Day