One of the great names to hold throughout the pandemic 2020 and beyond, Zoom Video (ZM) , has gone to equity markets to raise some dough... while the price is still rather elevated? Kind of makes one wonder, does it not? I had always liked Zoom Video, I did a couple of television interviews that day. If I recall correctly, Pinterest went public the same day. Zoom ran immediately, I took a pass. I did grab some Pinterest that day, and that was a good trade, but that is a tale for another day. Zoom was already profitable by the time it went public and had captured the imagination of not just individual investors, but of the entire financial media.

I did end up long Zoom Video eventually. As the SARS-Cov-2 coronavirus wreaked havoc on central China, and then moved on to Italy, an economist friend working in the Milan area of Italy at the time, e-mailed me with a warning. "You guys have no idea what is about to hit you." This is about the time that I hit you, the readership with my first "Pandemic Portfolio." Zoom Video was an original member of that portfolio, along with Microsoft (MSFT) for the "Teams" function, and Slack Technologies (WORK) , as I figured anywhere from one of the three to all three would break out as folks tried to work, learn and stay in touch from home. I did turn a nice profit on my ZM long, though that profit now appears quite paltry in comparison to where the stock went. I did not anticipate that. I still hold MSFT, and I don't even remember if I turned a profit on WORK. That stock really did nothing until agreeing to be acquired by Salesforce (CRM) , another Sarge long-time fave that is starting to look real neat again.

As we meander into our Tuesday trading session, Zoom Video closed on Monday night at $337.71, which is up 362% over 12 months, but little more than 25% over six months. In fact, the stock is down 43% since peaking above $588 on October 19th. This may be cause for the secondary stock offering of $1.5 billion on Class A common shares. JP Morgan (JPM) is not just running the book for this deal, JPM is acting as the sole manager for the entire offering. The underwriter, by the way has been granted a 30 day option to purchase an additional $225 million worth of stock. The deal as is amounts to roughly 4.45 million new shares which should increase the flat by about 2.3%. The stock had been trading lower ahead of the opening, but appears to have recovered very early in the regular session.

Zoom is expected to report Q4 performance in early March. Analysts are broadly looking for revenue of $814 million, which would be good for year over year growth of 332%, a third consecutive quarter of growth greater than 300%. Is that when the fun stops. For the full year (FY 2021), Wall Street looks for earnings growth of 731% on revenue growth of 315%. Assuming that economies in some way normalize, and at least some folks work together physically, FY 2022 gets real ugly. A consensus of the 25 sell-side analysts projecting numbers for Zoom Video out into FY 2022, see only 2% earnings growth for that year, on revenue growth of 37%

I wrote to you, some may recall, on December 1st. The last sale for ZM was $478.38. I told you that I no longer liked the name, that I felt the coming increase in competition would negatively impact the share price. Well, the shares have come in a long way since then. Microsoft Teams is not going to go away. Slack as part of Salesforce will only improve their game. ZM trades at 116 times forward looking earnings. MSFT trades at 32 times, CRM at 47 times. If you had to sell one, which one would it be? I know my answer. I'm not always right, but I know I am not going to get completely out of MSFT or CRM unless of course they violate panic points, but in each of those cases, I would look to re-enter more cheaply. 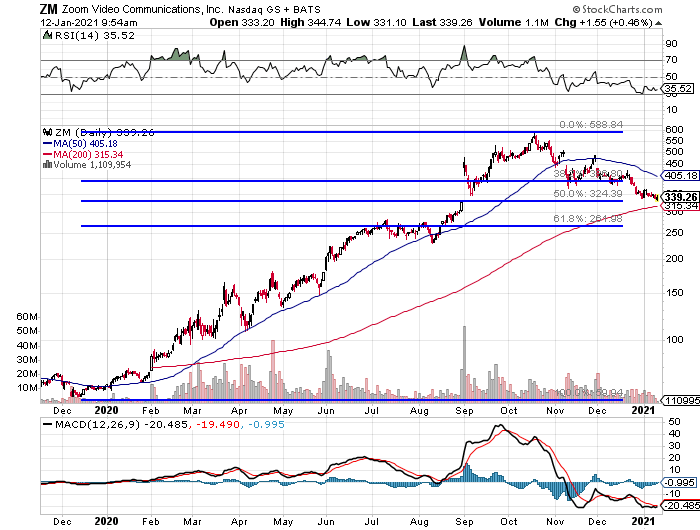 (MSFT, CRM, and JPM are holdings in Jim Cramer's Action Alerts PLUS member club. Want to be alerted before Jim Cramer buys or sells these stocks? Learn more now.)

Get an email alert each time I write an article for Real Money. Click the "+Follow" next to my byline to this article.
TAGS: Investing | Stocks | Technical Analysis | Trading | Media