The closing bell rang its last on Friday. Despite the fact that Friday was June "Jobs Day", the regular session had been surprisingly quiet. That wouldn't last.

Then news broke that surprised absolutely nobody. Tesla (TSLA) CEO Elon Musk had supposedly notified Twitter (TWTR) that he would terminate his agreement to purchase the perennial social media under-performer for a cool $44B ($54.20 per share). Musk accused Twitter of disclosing "false and misleading" information in regards to the number of fake and spam type accounts. Twitter stock sold off a rough 5% almost immediately in after-hours trading.

Over the weekend, it was reported that Twitter had hired the law firm Wachtell, Lipton, Rosen & Katz LLP as the firm prepares to sue Musk over this termination. Bloomberg News cited early this week as the probable timing for such a lawsuit. The deal is this... according to filings with the SEC, Musk would be required to pay Twitter a termination fee of $1B if he were to back out of the agreement. Musk will try to show that Twitter's lack (Musk's opinion) of clarity around fake, spam, and robo-accounts amounts to a breach of contract. Twitter, for their part, has and will continue to share information with Mr. Musk.

Speculation up and down Wall Street runs from the possibility that Musk simply no longer is interested in owning, and operating Twitter and then taking the business private... to Musk is still interested, but would like to renegotiate the price, to Musk is no longer interested. I see TWTR trading with a $34 handle early on Monday morning, which is a rough 36% discount to the previously agreed upon takeout price.

Is there a need for an ultimate outcome that either forces Musk to go through with this acquisition or pay Twitter the $1B break-up fee? Not necessarily. The possibility exists that Musk may wish to just make Twitter uncomfortable enough so that the firm is willing to settle out of court for a lesser fee.

Now, if Twitter really believes that it has all of its ducks in a row, and that it indeed had a deal that it could defend to sell a firm that went out on Friday with a market cap of $28B for $44B, then it would be crazy for them to settle for a fee of less than that $1B.

The only settling in that case that I could see Twitter going for would be a reduced deal price that both cuts Musk a break, while still being far more beneficial to shareholders than life as is.

On April 28th, Twitter reported Q1 adjusted earnings of $0.90 on revenue of $1.2B. These numbers amounted to an earnings beat on a revenue miss on 15.4% sales growth. Advertising revenue increased 23% year over year, while subscription revenue contracted 31% or just 5% when excluding MoPub.

Twitter has existed on negative free cash flow for three successive quarters, and as of March, had net cash of $6.262B and total current assets of $7.476B. Current liabilities amounted to just $1.136B, leaving the firm with a very impressive current ratio of 6.58. Total assets of $13.551B, even including $1.298B in "goodwill" dwarfs total liabilities less equity of $7.646B.

While long-term debt of $5.244B is a little on the high side for my liking, my liking does not matter here, and the firm had the cash on hand to cover every cent of it. Twitter has a solid balance sheet. Tangible book value per share of $5.97 may have been down from where Twitter was, but is still a lot stronger than many, many public corporations.

Twitter may have been a lousy stock over the years, but Twitter has no problem paying bills or meeting obligations and won't have that kind of problem any time soon.

Ives over the weekend, predicted "a long and ugly court battle ahead in which the fake account/bot issue will be scrutinized for all to see and casts a dark cloud over Twitter's head in the near term." 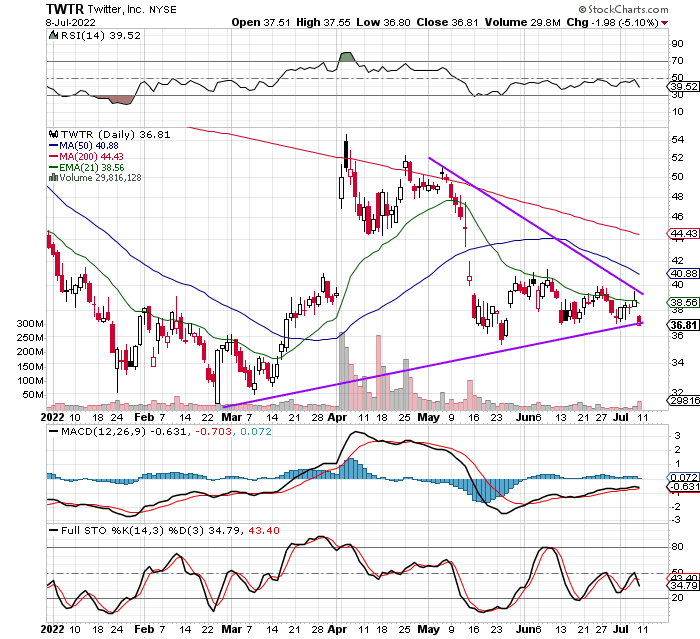 TWTR, as readers can see, has experienced a series of lower highs and higher lows this year, or at least since the Musk deal was first announced back in April. This kind of set-up has a good chance of producing an explosive move one way or the other.

Right now, it's easy to feel like that explosive move will be to the south. The stock has tested, but not bested its 21 day EMA repeatedly since late May. I really want no part of this stock. Too many still to be decided variables. 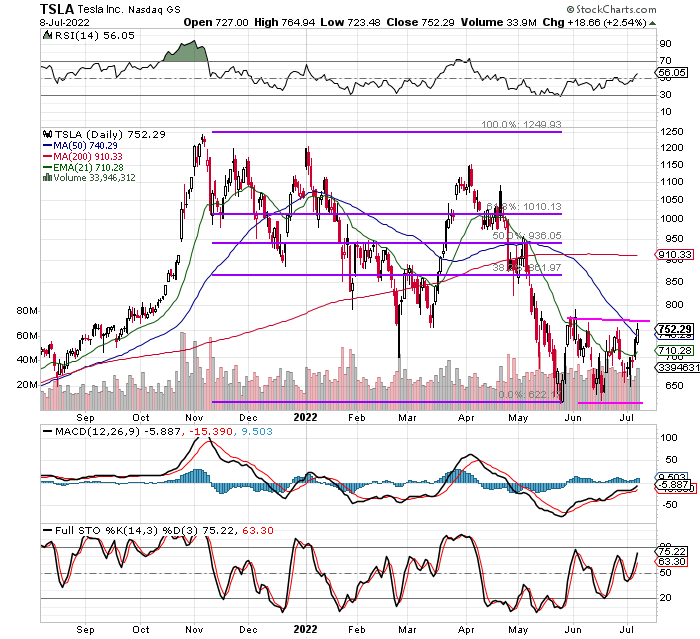 Now, this article is not really about Tesla, but look at that base over the past six weeks or so. The stock has now retaken its 50 day SMA, which is huge, and threatens to break out at this time. Of course, as Elon Musk is a finite resource, Twitter's loss is Tesla's gain. Now, if you're like me, you did not come in long TSLA and have missed the move to this point.

That said, should TSLA test that 50 day line from above and see it hold, I think there might be a trade here. Not necessarily an investment. You never know what China will do to Tesla's manufacturing ability in that region. A medium sized trade though? A definite possibility.

Get an email alert each time I write an article for Real Money. Click the "+Follow" next to my byline to this article.
TAGS: Mergers and Acquisitions | Investing | Stocks | Technical Analysis | Trading | Media | Elon Musk | Electric Vehicles