Yesterday, I wrote about how much I appreciated the clarity and transparency we witnessed from AMC Entertainment Holdings (AMC) . The reason I mentioned that is because corporate communication often works as the interim life blood of traders and investors. Sure, some of us use charts or options flow, so maybe news doesn't matter, but for many it will. What's ironic is how the same news can be spun in different ways. Those are the things that frustrate me. It's like saying the same sentence but stressing a different word to get a different meaning.

For instance, say, "She loves me" with the stress on the word loves.

The meaning changes. This can happen in press releases as well, however, it is usually a change in wording to create a spin or a soft landing when you want to avoid situations. In short, press releases shouldn't create questions but rather, they should answer them.

Here's a recent example. Liquid Media (YVR) announced on June 2nd that "the Company also announces the expiry of its letter of intent with CurrencyWorks Inc. (CWRK) ."

That really doesn't sound all that bad.

This news was in reference to a March 31, 2021, press release surrounding Red Carpet NFTs and an NFT Entertainment platform, so folks focused on that aspect (I was originally one) certainly may have been a bit disappointed. Interesting to note, CWRK had no quote in the press release nor had its ticker tagged. That usually signals the other company issued the press release without running it by the other.

This morning, CWRK had their own press release where they stated, "CurrencyWorks also announced the termination of its letter of intent with Liquid Media Group and is proceeding with the entertainment NFT platform under its own direction."

I've attached and highlighted the press releases with these quotes for reference: 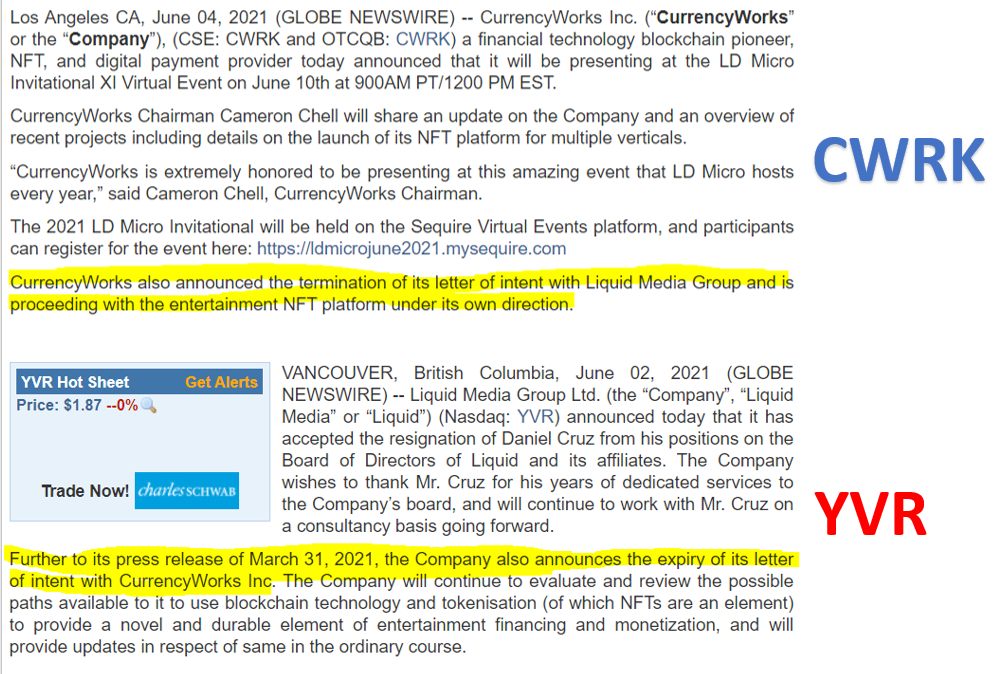 Doesn't quite read the same, does it? Expiry and termination don't mean the same thing. One sounds like we mutually let it die while the other reads like we killed it. Furthermore, when you add the extra component that one is carrying on without the other, then it potentially adds an extra layer of meaning to the word "termination."

This is where transparency kills me. Ironically, it also creates a market because the original release can be interpreted anyhow you see fit, and you're likely to interpret it toward your bias. If you're bullish on YVR, then you're more likely to say it was mutual or maybe the financials didn't make sense or perhaps the project pushed your risk comfort level too far. If you're bearish on YVR, then you might interpret this as CWRK walked away because the partnership became one-sided, and they were doing all the work.

As for me, I'm excited to see what CurrencyWorks will bring to the table on the entertainment side of the industry for NFTs. This is still an under owned name in the crypto related space from NFTs to environmentally friendly mining to coin creation to payment rails. It's a pick-and-shovel play on the sector. In terms of small, speculative names, this is my largest holding.

Seeing YVR changing over the CFO position recently, a founder resign from the Board, and the President selling shares in addition to the potential NFT near-term catalyst and revenue generator now off the table gives me pause on the name.

To its credit, Liquid has announced some additional LOIs/partnerships in the media space (iNDIEFLIX and dotstudioPro), nothing with broad name recognition, but these names could work well for the edutainment and social justice niche, so there are catalysts for bulls to grasp. However, their model requires execution on partnerships. Unfortunately, we now have one attempted partnership execution that failed. Fortunately, one isn't a trend. If the company can execute, then from this market cap and low revenue, then there is solid upside potential. If another partnership flops, then I would anticipate YVR trades down to a buck.

Get an email alert each time I write an article for Real Money. Click the "+Follow" next to my byline to this article.
TAGS: Investing | Stocks | Trading