Now that I have your attention, I will gently remind you that way back in 2018 (it was Monday), being long and feeling positive about steps currently being undertaken at the Walt Disney Co. (DIS) that I was bullish on the stock going deep into 2019. One key reason was Disney's expansion into the business of streaming television. The flip-side of this thought is the negative trade. As I mentioned in that piece on Monday, my top short idea for 2019 is Netflix (NFLX) . That idea is based on increased competition across the space, and not just from the mouse either.

Not only is Disney moving ahead with their own Netflix-type service that will run with their own content, the semi-recently released ESPN-plus service has been a huge success to date, proving on a smaller scale that Disney can pull this off. In addition, Disney will now control already in place Netflix competitor Hulu after acquiring the stake previously owned by Fox (FOXA) . Competition will either be increased or implemented by the likes of Amazon (AMZN) Prime, Alphabet (GOOGL) , AT&T (T) , CBS (CBS) , and even retail giant Walmart (WMT) .

The Death of FANG

The growth stocks famously grouped by Jim Cramer under the acronym "FANG" turned in a mixed performance in 2018. While Alphabet turned in a mildly negative performance for the year, and Facebook (FB) saw it's share price simply trampled by the marketplace, both Amazon, and Netflix experienced healthy gains for the full year despite precipitous falls from grace the never really abated throughout the forth quarter.

Wall Street generally does not agree with me on Netflix. I believe that the dramatic uptick in competition will either deprive Netflix of content, or force much higher the cost of either retaining, or self producing enough content to keep the public interested. By now, we all saw how easily AT&T was able to literally extort $100 million, up from $30 million, for just one more season of the hit show "Friends." Now, multiply that as Disney eventually pulls content, or as all of the above mentioned competitors drive higher the demand side for niche programming.

Operating margins have been growing at Netflix. I don't know how sustainable that will be in this environment. Sales are still growing, as is cash on hand... but total debt is growing even faster. The firm runs on negative operating cash flows, and a Current ratio that I wouldn't wish on my enemies. Sun Trust Robinson Humphrey lowered their price target this morning from $410 to $355. That is still almost $100 north of the last sale. Throughout December three analysts rated at four stars or higher (out of five) all placed or reiterated "Buy" ratings on Netflix, with price targets ranging from $382 to $421. Clearly, in this name I am an outlier. 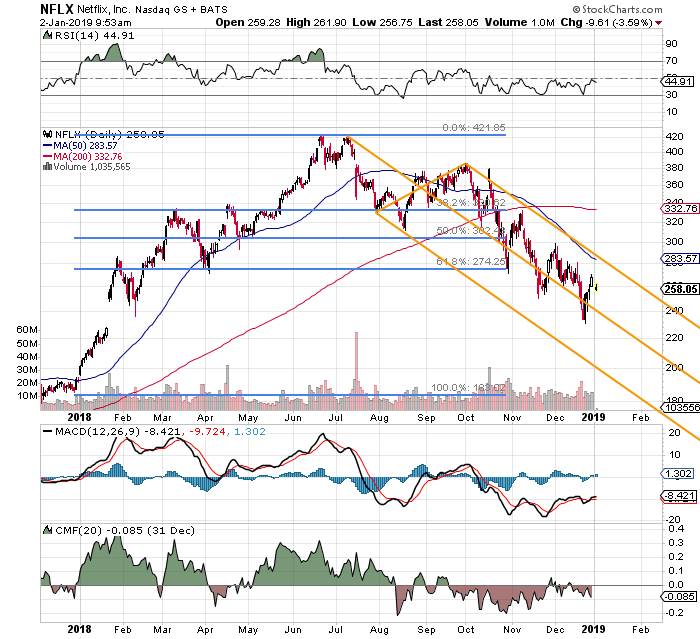 First off, in full disclosure, I am flat the name right now, I covered my existing short last week (profitably), and look to re-establish such a position on a nice up day for the markets that drag Netflix along.

Two Ways to Skin a Cat: A trader could simply short the stock at an attractive level. I would want to see a move back toward $270 before going that route. A trader could also try a half year bear put spread. What's that? This example might explain.

Why go this route? What if an investor shorted 100 shares of Netflix at the last sale? How much money could that investor lose? If unhedged... infinity, right? In our example, the net debit from the trades is $15.55. That means that the max loss on this trade is $1,555. The max profit would be realized if the equity moved below $220 by expiration. The trader would then profit to the tune of $24.45. In other words the trader in the example is risking $1,555 up front to win back $4 grand. 157% profit sound okay?

Get an email alert each time I write an article for Real Money. Click the "+Follow" next to my byline to this article.
TAGS: Investing | Options | Stocks | Technical Analysis | Trading | Digital Entertainment | Movie Production | Movies | Stock of the Day