How much did you need to see that? Literally all of our primary as well as our less focused upon equity market indexes showed significant gains for the shortened work week. For many of these averages, the weekly gain ended what had been a three week losing streak. The Fed was out and about. The Fed Chair himself spoke publicly, and reinforced everything he had said in his brief appearance at Jackson Hole. The Fed is not a market ally right now.

Yet, that market rallied. Even with a hawkish Fed. Even with a yield curve that really has been pushed out, and not come back in. What gives? Perhaps it was the 75 basis point rate hike implemented by the ECB. This finally forced sellers to move on the US dollar. The dollar had become extended. It was natural that as foreign central banks entered into their own battle with inflation, that those currencies represented would strengthen. The US dollar sold off against the euro specifically, but also against the basket of reserve currencies in general that compose the US Dollar Index.

Economically, other than the bevy of Fed officials that stood with their leader, forming a wall of monetary "group-think", there was not much to go on. The ISM Non-Manufacturing survey printed hotter than expectations for August. Of course, this was in complete contrast to the S&P Global Services PMI for August that showed that the service sector had come close to breathing its last breath this summer.

The Fed also released a tepid Beige Book that seemed to tell us very little about the current state of the US economy. On Friday, the Atlanta Fed revised its GDPNow model for the third quarter downward to +1.3% q/q SAAR. Hey, at least it's above zero.

Trading volume had been expected to rebound after a slow summer for the week after Labor Day. Yes, some folks do like to take off when we have a four day work week, but the week after Labor Day is different as nobody likes to see their children miss their first week of a new school year. Indeed, if traders were back, they for the most part watched this rally while sitting on their hands.

All 11 of the S&P sector-select SPDR ETFs shaded green on Friday and green for the week, with 10 of the 11 adding at least 1.96%. Eight of the 11 gained at least 3.27%, while five gained at least 4.26%. Consumer Discretionaries (XLY) led the way, up 5.78%, while Materials (XLB) posted a gain of exactly 5%. Still, the lower trading volume has to make this rally suspect. Right? If only it were so easy to figure out. With no volume based confirmation, I feel as if we are groping around in the dark for an answer.

The week ahead? The Fed has been in its pre-policy meeting media blackout period since Saturday. At least that's one less item for high-speed electronic, algorithmic traders to artificially move markets on. This week, while light on earnings, with really only Oracle (ORCL) and Adobe (ADBE) reporting among household names, will be heavy on the macro.

The main event will obviously be August CPI on Tuesday. Then, PPI is due on Wednesday, while August Retail Sales and Industrial Production will print on Thursday. The New York and Philadelphia Feds will also release their regional September manufacturing surveys on Thursday, after the US Treasury auctions off $32B in Ten Year Notes on Monday and $18B in Thirty Year Bonds on Tuesday.

How big is the August CPI this week? Other than dollar valuations... which have sagged, putting a bid under US equity index futures through the Sunday night/Monday morning overnight, it is everything. Consensus is for growth of 8.1% year over year at the headline (down from July's 8.5%), which might embolden the Fed's aggressive stance on monetary policy given the "still elevated" annual pace. On a month over month basis, Wall Street is looking for a print of -0.1%, down from July's 0.0%. If realized, that would mean that in aggregate, nominally, consumer prices will not have budged to the upside since June.

Core inflation might be more problematic with nationally collapsing gasoline prices pressuring the headline prints. At the core, expectations are for an increase from 5.9% to 6.1% for the year over year number and for the month over month number to hold steady at +0.3%.

In addition to the data, the focus also has to be on US Treasuries. The yield for US Ten Year paper moved 13 basis points higher last week, and has moved higher for the week for six consecutive weeks. While this has gone a long way toward un-inverting the yield curve...

...which is a positive, one would think that with that yield approaching its June 16th high of 3.48% that fixed income will compete directly with equities for investment dollars. The US Treasury Department's website shows the Par Real Yield for the US Ten Year Note as 1.14% on Friday, where it was just 0.86% on June 16th.

I would think that a US Two Year Note that pays 3.56% nominally makes a whole lot more sense than anything longer-term...

.... also makes more sense than a CD at your local bank if one can tie up the cash for 24 months.

From the latest FactSet data - with third quarter earnings season still a month away in earnest, the estimated earnings growth rate for the S&P 500 for the quarter will be 3.7% (y/y) on revenue growth of 8.8%. This is down from projected growth of 9.8% as recently as June 30th, and would be the slowest pace of growth since a negative print for Q3 2020. For the full calendar year, S&P 500 earnings are expected to rise 7.9%, while revenues increase 10.8%.

Among S&P sectors, Energy is expected to once again easily lead the market at earnings growth of 120%, with Industrials (XLI) in second place at 25.9%. Communication Services (XLC) , is expected to reside in the cellar (come in 11th place) for the third quarter with "growth" of -13% with Financials (XLF) also buried in negative territory (-11%).

It appears that Ukrainian forces have made stunning progress in their offensive over the past few days, as Russian forces have rapidly retreated from their positions in many places, leaving much of their military equipment behind. The Ukrainian military is said to have advanced some 90 kilometers east of Kharkiv and could be within 50 kilometers in some spots of the original border between Ukraine and Russia. Jack Watling of the Royal United Services Institute in London was quoted by Bloomberg News on Sunday as saying, "The Russians collapsed and withdrew altogether, and I am sure the Ukrainians were not expecting that." Reports are also circulating that the eastern Ukrainian cities of Izyum, Balaklia and Kupiansk have all been recaptured by the Ukrainian military.

According to the Financial Times, Walt Disney Company (DIS) CEO Bob Chapek was reported on Sunday as having rejected the suggestion made by activist investor Third Point that the firm consider spinning off the sports network and properties of ESPN. Third Point revealed that it had taken a $1B stake in DIS in August. Chapek says that he has been "deluged" with interest from prospective ESPN buyers ever since. The FT also reports that Dan Loeb, who is the braintrust behind Third Point, appears to have stepped back from that suggestion. The level of interest from outsiders appears to have influenced both leaders.

I noticed the cutest little cup and handle pattern while doing my homework this weekend. I am not in Boston Scientific (BSX) , but those interested in beefing up their exposure to the health care space may want to look at this. 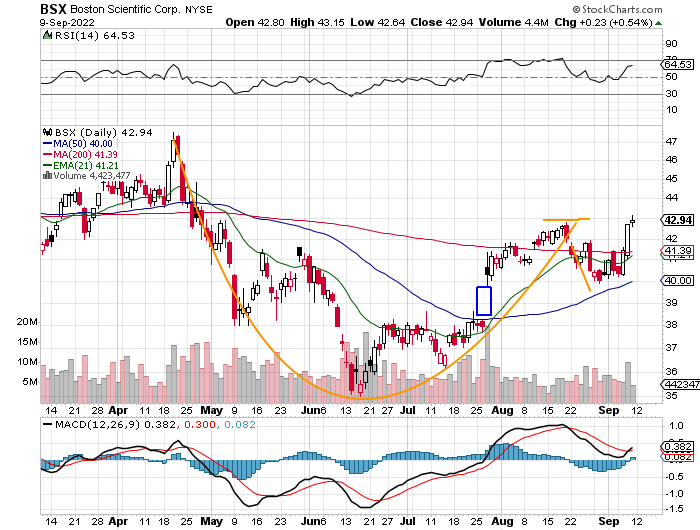 Readers will note the cup with handle pattern stretching from late April into September. Readers will note that BSX moved on the $43 pivot that the pattern created last week. Meanwhile, after finding support above the 50 day SMA, this stock now runs with a string but not overbought looking RSI and a daily MACD that appears to have just experienced a bullish crossover of the 26 day EMA by the 2 day EMA.

What do I think? I think if $43 (the pivot) can be taken and held, that traders can potentially get $51 for these shares. Worth a trade? I think maybe in small to medium size. Six weeks till earnings. One note of caution... There remains that unfilled gap between $38 and $40 from late July.

Get an email alert each time I write an article for Real Money. Click the "+Follow" next to my byline to this article.
TAGS: Earnings | Economic Data | Federal Reserve | Investing | MBS | Stocks | Technical Analysis | Trading | Treasury Bonds