You saw the headline. Maybe you did not. On Wednesday, Fox Business reported that Costco Wholesale (COST) had issued a warning to customers placing orders to purchase toilet paper online. Fox Business stated that upon order placement an email sent by Costco's customer service team stated, "Due to increased volume, you may see a delay in the processing of this order." The website already warns shoppers that there may be limits on certain items at some warehouses. This story jives with a news story run at the Wall Street Journal earlier in the month covering the fact that Procter & Gamble (PG) has been ramping up production in order to offset a surge in demand for the precious white squares.

While Costco had been an early pandemic winner and for that matter a sustained pandemic winner, that does not mean that Costco does not also have to deal with rising expenses due to supply chain bottlenecks causing increased shipping costs and the same labor market pressures as everyone else. We know going in that Costco has been selling, and selling en masse. What we don't know for sure, is where the margin is, and key to everything, where comparable sales will print.

Costco Wholesale will report the firm's fiscal fourth quarter and full year financial performance on Thursday evening. For the three month period, consensus view is for a rough $3.54 on revenue generation of $61.45 billion. These numbers, if realized, would amount to bottom line growth of 13.1% on top line growth of 15.1%. Both very healthy, but both substantial decelerations in sequential terms. Investors should be alert to the fact that there are EPS whispers running well above the accepted consensus. Numbers in the $3.70's would not shock.

I have found 26 analysts covering Costco for this quarter. Over the course of the past three months, 15 have revised higher their earnings projections, while 15 have revised higher their revenue projections. Not a single analyst revised either metric to the downside. The range of EPS expectations runs from $3.23 to $3.79, while the range for revenue projections spans from $56.6 billion to $63.4 billion, though I really don't understand that, given that Costco reports its sales to us on a monthly basis and tends (at least lately) to beat that expectation by close to a cool billion.

Beyond these headline numbers, Wall Street is looking for membership fees to rise to about $1.2 billion, while the all important comp sales are seen growing 14.3% including fuel, and unadjusted for currency fluctuations. Comp sales excluding fuel in constant currency is expected to grow 8.5%. Another metric, and one that I rely upon more and more with Costco as well as Walmart (WMT) , Target (TGT) and of course Amazon (AMZN) , is e-commerce. For the third quarter, Costco e-commerce sales increased an adjusted 38.2%. Growth of anything significantly lower than that will likely be taken by the market quite negatively.

Lastly, for the third quarter, operating expenses amounted to $43.61 billion, including $39.41 billion worth of merchandise costs. Selling, General, and Administrative costs added up to $4.19 billion. I will be interested to see what the ongoing supply chain constraints due to the Delta variant of COVID-19 has done to these entries. Other than that, the firm's balance sheet.. at least three months ago, was very strong. Costco could pay off their long-term debt out of cash. The firm doesn't even have an entry for goodwill, which I love. 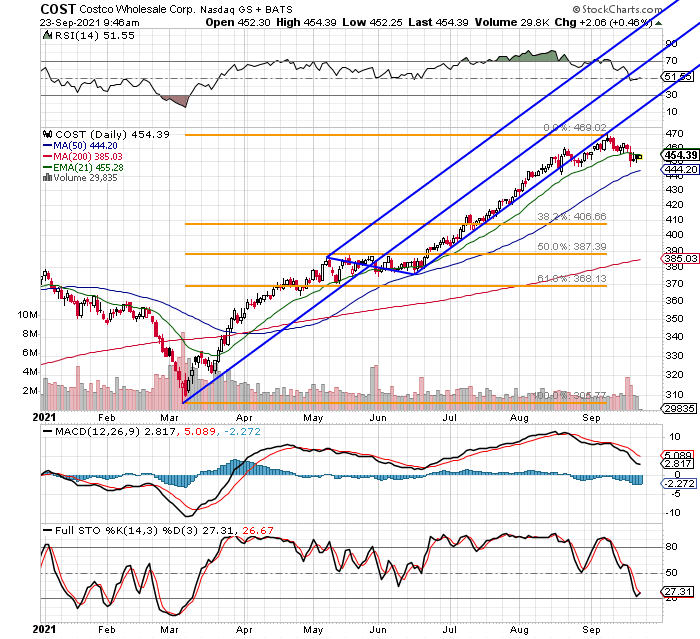 Readers will see COST coming into earnings a bit on the weak side after a long successful run. In late August, the stock lost the lower trendline of a Pitchfork model that had been in place since the lows of early March. In September, the shares surrendered their 21 day EMA, but not their 50 day SMA. The Full Stochastics Oscillator is close to crying "uncle", but the Relative Strength Index is having none of that. The daily MACD signaled weakness in early September. The 12 day EMA has so far shown no sign of making a move on the 26 day EMA, while both remain elevated. A lot of mumbo jumbo there. A lot of mixed signals.

What would you pay for COST going into earnings. Dangerous. $455 a share is a lot of cash. Willing to pay the 50 day line? That's a rough $444. $445 puts expiring tomorrow are still paying more than $2. Willing to pay the 38.2% Fibonacci retracement line? Sure, That's only $406. $410 puts expiring tomorrow are currently paying about $0.15. Probably won't get there, but that's a lot of risk to take on for some lunch money. What if you know you want to own some COST, but really aren't sure how the market will react tonight? I have an idea.

(Costco, Walmart and Amazon are holdings in Jim Cramer's Action Alerts PLUS member club. Want to be alerted before Jim Cramer buys or sells these stocks? Learn more now.)

Get an email alert each time I write an article for Real Money. Click the "+Follow" next to my byline to this article.
TAGS: Investing | Stocks | Technical Analysis | Trading | Retail | E-Commerce | Earnings Preview