A Couple of Lah Dee Dahs...My apologies to L. Frank Baum who wrote the children's novel, "The Wonderful Wizard of Oz", but that tune somehow entered into the back of that excuse for a cranium that I bear atop my shoulders on Tuesday afternoon. You know the little diddy... it's a very happy little song that the citizens of the Emerald City all sing together about their "Merry Old Land of Oz" just after Dorothy noticed the horse of a different color. That's what Tuesday was. Get it? Tuesday was a horse of a different color.

Interestingly enough, it was our old friend William Shakespeare who in in his own way, more than 400 years ago, actually made first recorded use of something close to this term when he referred to "a horse of that color" in the play "Twelfth Night" to illustrate the similarity between two matters or conditions rather than defining their differences. Now that I have you thinking about the 'Wizard of Oz" and William Shakespeare, you're almost ready. Ready for what? Ready to think some more. Why? Because thinking is the first step toward understanding. Then we move on toward our defined pillars that all eventual victories, outside of the lucky ones (Yes, luck, both good and bad does exist.) must stand upon.

Equity markets peaked on September 2nd. Equity markets rallied on Tuesday, and for the first time since September 2nd, traded in a wide range, while closing at the top of that range. Was this turn for the better, "The Turn"? Are markets okay now? I have serious doubts. Daily charts still appear troubled, few of our existing problems have been either solved, nor have we bore witness to outcomes where there had been uncertainties. Still, the intra-day chart was impressive, and know what? The pressure on the marketplace that began on September 3rd, bottomed on Monday. If indeed that was a short-term bottom, then markets had been pressured for exactly... say it with me... "Twelve Nights."

The risks remain. The virus is still the great question mark as we head into colder weather. When vaccines arrive is still some date in the future. How effective such vaccines will be, and how safe? We don't know. Perhaps we won't know for quite some time. Even if everything works like a charm, most of us will have to work our way through another six months of mask wearing and social distancing... at a minimum. That makes this halftime. Sounds tough? It is, but when faced with reality, dig a hole in the ground with two grenade sumps (hopefully to be used more for drainage than for grenades). Why? Because you might just have to make a stand right here. That and these modern boots were meant to be used in the desert.

By the way, aggregate trading volume declined from Monday at both of New York's primary exchanges. Is this meaningful? Perhaps. Trading volume in aggregate across constituent members of the S&P 500 fell short of the 50 day simple moving average for trading volume for that index on it's first "up" day after exceeding the 50 day SMA on four consecutive "down" days. There is no doubt in my mind that at least a decent number of managers have been shaken out. The question now is... Are these managers still thinking in distribution mode? Then they sell the pop here. Or... Are they forced to chase the bounce with the cash created to try to camouflage their mistake?

What we know is that this market does nothing fantastic without the Information Technology sector in 2020. The sector is just too broad, and heavily weighted. Probably could be broken down further now that Internet type names have been moved into Communication Services. I mean software could lead one new tech based sector. The semiconductors and hardware could be lumped together. I know, I know. Makes too much sense. Can't happen. By the way, you kids notice who led the software group yesterday. Not the usual "cloud king" type suspects. Leadership came from last week's less hyped IPO, Jfrog (FROG) , Teladoc Health (TDOC) , and Datadog (DDOG) .

Oh, Defense was a leader within the Industials led by Lockheed Martin (LMT) and Northrop Grumman (NOC) . Always like to see that. The Financial sector remains dead weight upon the marketplace. This negative is one that must at least be observed. Economies do not recover well without their banks. Banks are not highly valued without visibly growable net interest income.

Oh, because a reader asked... I am not in the name right now, but Kratos Defense (KTOS) tested July support on Tuesday and literally closed at the 50 day SMA. This is potentially positive. The new deal to work with Microsoft (MSFT) is probably where the support came from, and I find the name interesting. What it does here at the 50 day is key. I would rather add either on momentum above that level or on another retest of those lows, than just grab a few at the last sale. Just my opinion. Everyone has one. You know what they say about that.

What We Need Now

Pure and simple. Follow through. Equity markets have to follow through, and if it happens today, it does not count the same as if it happens a couple of days down the road. Please understand. If it happens today, there could be for human managers... an element of emotion involved. For the algos, well they just try to push things too far on every move thus muddying the waters. Should markets struggle or move sideways for a couple of days, and then produce a high volume "up" day, that would be a thing of beauty. Simply because it would be the result of developed decision making. Know what I mean?

The Nasdaq Composite fell just short on Tuesday of taking back the 50 day line. The Nasdaq 100 came even closer. This index is now the key, and has been for some time, at least for those who have to make money every day (on average) in order to support a household. 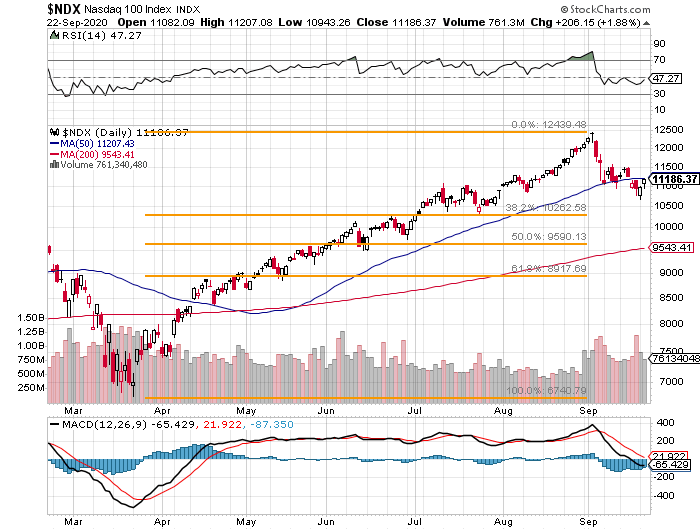 There was a common theme on Tuesday. Both Fed Chair Jerome Powell and Treasury Secretary Steven Mnuchin (Thank goodness for these two guys.) testified before the House Financial Services Committee on Tuesday. At the hearing, both of these leaders stressed the need for fiscal help in order to keep the economy from slowing too early. (already happening). Fiscal help would have to come from Congress so these are the right folks. Chances they understood what they were told? Anyone? Not funny.

In addition, Powell stressed that he would like to make better use of funds that remain available under two under-utilized Fed lending programs... the Municipal Liquidity Facility and the Main Street Lending Facility. Powell feels that these programs can be tailored better to provide credit to both municipalities and smaller businesses. The catch there? Congress would have to act to change the law these programs were created under. Forgive me if my trust in Congress has diminished. Further.

The good news is that the House did pass a short-term spending bill that would keep the federal government running through the election after reaching an agreement with the Trump administration focusing on farm aid, and food assistance for the hungry. Guess neither side is willing to chance taking the blame for shutting down the government ahead of November. Blame seems to be the only motivation our legislators do understand.

Amazon (AMZN) has partnered with Echelon to create the new "Prime Bike" which will compete at attractive pricing, the space currently dominated by Peloton (PTON) . So we thought. Echelon has been in the connected exercise bike business since 2017, and in addition to the new bike, has done business with Walmart (WMT) along these lines. FYI, I am long all three of these names.

Early Wednesday morning, an Amazon spokesperson in an email states that Echelon's Prime Bike is not an Amazon product, nor is it related to Amazon Prime. I would expect some clarification of this developing story to take center stage at some point as Wednesday morning develops. What am I doing as a trader?

I'm not selling Amazon or Walmart anytime soon. Peloton is more of a trade. I either sell that name at par ($100) or net basis ($88.89). By the way, Oppenheimer's Rupesh Parikh reiterated his "Outperform" rating for WMT on Tuesday while increasing his price target to $152 from $145. My price target has been and remains $151.

- Nike (NKE) crushed the quarter. My directional trade idea was obviously terribly misguided on Tuesday morning. That said, that's why we hedge our bets and that's why the example in the trade idea showed exactly how to do so. Nike was trading at $132 overnight. The example provided in that piece may have shown shorting the equity above $113, but also locked in a cover trade at $117 without increasing net basis. That's the difference between losing almost $19 per share and losing less than $4. Learn how to use options to hedge your trades.

- Tesla's (TSLA) "Battery Day" more or less disappointed. The shares were lower overnight, but in my opinion... just not low enough to act. I would consider an add down around $375. I see no reason to increase net basis if one is already up in the name on a 5% move.

(Microsoft, Amazon and Nike are holdings in Jim Cramer's Action Alerts PLUS member club. Want to be alerted before Jim Cramer buys or sells These stocks? Learn more now.)

Get an email alert each time I write an article for Real Money. Click the "+Follow" next to my byline to this article.
TAGS: Earnings | Economy | Investing | Markets | Options | Stocks | Technical Analysis | Trading | Coronavirus

Glencore: Is the Correction in the Commodity Giant a Giant Buying Opportunity?

Let's check the charts as a window into the possible future of commodity prices.