There was a perception, after Tuesday's closing bell, that US equity markets had posted another winning session. Those I heard speaking to the financial media after the closing bell appeared to feel that way. I did not. The final score for Tuesday shows mixed performance at best, as did market breadth in general.

Sure, the S&P 500 did trade at its highest level since April 22nd. Sure, equities did close on some strength, climbing out of an afternoon hole. The S&P 500 also suffered sharp algorithmic rejection intraday, at its 200 day simple moving average, which is also almost precisely where one would expect that trendline resistance would be. Take a look at this... 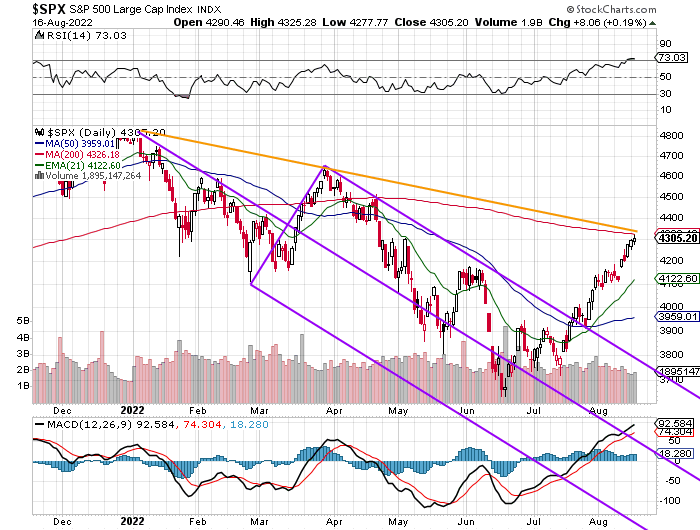 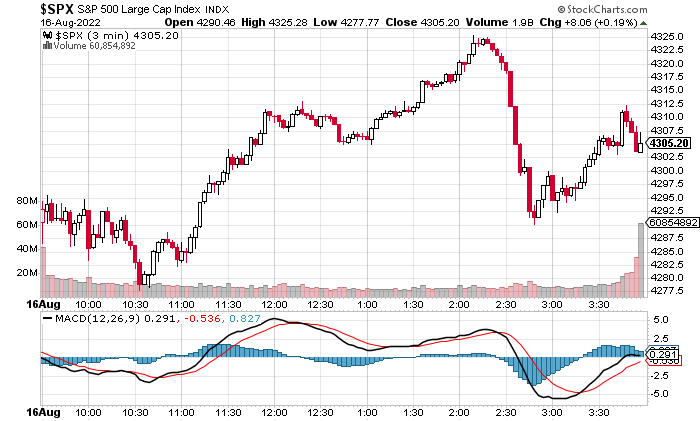 Now, we turn to the intraday chart of the S&P 500. Look at how sharply the index is rejected at the moving average. Humans do not trade with that kind of precision. That was algorithmic. Profit taking at that level was planned ahead. The index gave up 35 points in less than half an hour until buy programs then stepped in. If and when the index makes another attempt at taking the 200 day SMA/obvious trendline, what happens then? How many retests will it take to open that door? Good question. We do know that multiple players have probably identified this spot as a battleground.

The S&P 500 would close Tuesday's session up 0.19%, and a third consecutive green daily candle. Looking at the marketplace more broadly, while the KBW Bank Index added 0.8% and the Dow Transports tacked on 0.74%, the Nasdaq Composite coughed up 0.19%, as the Philadelphia Semiconductor Index surrendered 1.03%, and the Russell 2000 closed just short of unchanged (-0.04%). The Dow Industrials outperformed the other large cap indexes as both Walmart (WMT) and Home Depot (HD) ran higher post-earnings.

The strength in retail ran consumer stocks higher for the day. Of the 11 S&P sector-select SPDR ETFs, seven shaded green for the day, but only two gained at least 1% on Tuesday. Those two were Consumer Staples (XLP) , and Consumer Discretionaries (XLY) . From an industry performance perspective, the Staples were led by Food and Drug retailers while the Discretionaries were led by home improvement and apparel retailers.

Check this out for breadth. Winners beat losers by a rough 6 to 5 at the NYSE, while advancing volume took a 63.6% share of composite NYSE-listed trade on aggregate trading volume that increased 16.9% day over day. Sounds fairly bullish, right? Now, we'll take the uptown number 2 train from Wall Street up to Times Square.

Losers beat winners by about 5 to 4 at the Nasdaq Market Site, while advancing volume took only a 44.8% share of composite Nasdaq-listed trade on aggregate trading volume that increased 12.7% day over day. Sounds pretty bearish, doesn't it?

How Frightened Are Investors?

The Bank of America (BAC) global fund managers survey shows that a growing majority of investors now see the global economy in recession at some point over the next 12 months. Investors overall... "remain bearish, but no longer apocalyptically bearish, as hopes rise that inflation and rates shocks end in coming quarters."

On that note, as the VIX hovers close to its lowest levels since early April...

Fired up for July Retail Sales this morning? How about the Fed Minutes? On Tuesday, market participants had to interpret the weakest monthly print for Housing Starts in July since November of 2020, but also the first month over month growth for Industrial (and Manufacturing) Production since March. Actually, before we get excited about July Industrial Production, increased output of motor vehicles did mask broader weakness elsewhere.

I think the most concerning data-point of the day, that came out alongside, but not associated with the weaker housing starts that illustrated just why homebuilder sentiment is so poor, was the analysis released by Redfin concerning contract or "home-purchase agreement" cancellations. Apparently, in July, a rough 63K of such agreements were cancelled. This is about 16% of properties that went into contract in July, up from 15% of all contracts for June. What's normal? I don't know anymore. In August 2021, so the year-ago comp, the percentage of canceled contracts was 12.5%.

Interestingly, as advertised, the Atlanta Fed revised its GDPNow model for the third quarter on Tuesday after the data-points of the day hit the tape. Atlanta revised the contribution for private domestic investment significantly lower, while increasing slightly the contribution for real government spending. All in all, Atlanta took their real-time snapshot for Q3 2022 GDP growth down to +1.8% from +2.5% (q/q, SAAR). The model will again be revised today (Wednesday) after adjusting for the day's July retail sales data.

Sounds good. The US appears to be moving toward a final rule that would establish a separate medical device category for certain air-conduction hearing aids used by adults. The Biden administration had instructed the FDA to take action within 120 days to allow hearing aids, which are different from personal sound amplification products, to be sold over the counter.

I have been looking forward to this day since forever. As someone who spent decades on the trading floor of the NYSE, readers can see why I would be reluctant to go out and seek medical help for my hearing loss which I had suffered as a young man in the service of my country (like so many others). I had to mask that hearing loss in a marketplace where (prior to electronic trading), one's word was one's bond.

My employers usually figured me out fairly quickly, but out in the crowd, I had used all sorts of tricks to get traders to slow down trade, to repeat bids and offers more than once or to face me when speaking. Even now, interviewers on television and radio know how much trouble I have hearing them when I can not see their faces. I did pass the hearing test to get back into the military decades later when manpower was short and the call went out, but I barely passed... I had to take that test more than once and I guessed on much of it.

I look forward to the availability of hearing aids without a hassle for folks with some but not complete hearing loss who maybe for one reason or another have not sought medical attention for their condition. 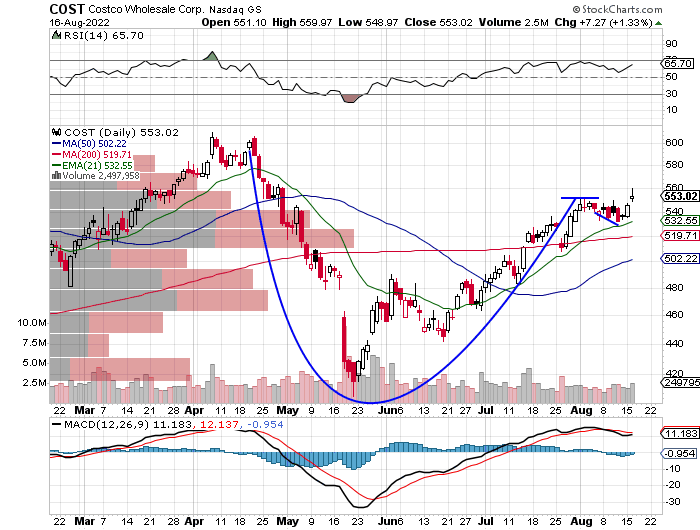 Readers will see Costco (COST) supported by Tuesday's Walmart pop, take on a $553 pivot created by a nearly 10 week cup with handle pattern. Readers will also see a daily MACD that looks to ease a bit, but a reading for Relative Strength that is solid, but not overbought.

Be cognizant of the fact that COST has not yet taken and held pivot. A lot of that will likely have to do with how the market responds to Target's (TGT) earnings this morning. Should COST take pivot, my target price could be as high as $650. Note also... the volume shelf down around the 200 day SMA. I look to that spot as potential support on any weakness.

Get an email alert each time I write an article for Real Money. Click the "+Follow" next to my byline to this article.
TAGS: Economic Data | Economy | Federal Reserve | Investing | Markets | Stocks | Technical Analysis | Trading | Consumer Products