Terror. Fear, growing... trapped in the mind. Screaming in silence. Maybe not trapped at all. Alone in the darkness. Condemned. A pendulum descends. The walls close in. The only way out .... A precipitous, helpless fall. Unless rescued, the condemned are now helpless. Who is helpless? Who are the condemned? For, if not able to better understand .. the mirror bears a familiar face.

It would appear, staring out my office window, that now markets have reached the spot where the pendulum may more freely swing in either direction. Terror? Not yet. What Now? That is the question. Now that the discussion over trade in Beijing has gone about as well as hoped for. Now that the central bank has made an attempt to appear less aggressive. Now that the dollar has stopped climbing. Now that oil has recovered a great deal. What now? The federal government is still partially shut down. There is a debt ceiling out there with our name on it, and a looming expiration date on it's suspension. So, I ask of you, my friends, my kindred spirits, my brothers and my sisters.... what freaking now?

On Wednesday, markets heard from several of our key central bankers. In aggregate, they seem mostly dovish now. For the most part the group seems willing to take a data dependent stance. That's an improvement. You all know how I feel about that. Data dependency is not nearly good enough. If monetary conditions are understood to have been perverse for an extended period of time, if fiscal policy is just as perverse in nature, if the U.S. debt to GDP ratio has now passed 100%, when more than 60% is thought to be unsustainable then tell me this. Is not the data simply unreliable as a guide unless simply used to reinforce an agenda?

The lesson? Arrogance can be fatal. Underestimating the immediate danger to one's front will injure those left in one's charge. Need proof? Johann Gottlieb Rall is still in New Jersey. Why is that? Because he did not understand that a desperate army was willing to kill him in his sleep at Christmas. That's why. The central bank must anticipate. They must be ahead of the curve. Data dependency is simply another term for being "frozen in the headlights". What does the deer crossing the road do? Helplessly, the deer waits for the vehicle to make a move. Data dependency.

Stay With Me Here

The reader needs to understand a few items in order to proceed. One... monetary conditions provoke human response. This is simple. Humans are very different now than they were 10, 20 or 50 years ago. So is money supply. So is debt on every level. Therefore, and this goes for everyone, you just do not know. Don't know? Exactly.

Balance sheet manipulation as a tool is still experimental... in both directions. We believe that changes in monetary conditions take at least nine months to work their way into every day life. We also believe that the removal of $50 billion per month of liquidity from the economy will work out in terms of impact as a synthetic increase of 100 basis points (1%) for the Fed Funds rate per year if the pace were to be left unaltered.

Got it? $600 billion worth of quantitative tightening equals approximately 1% worth of short term rate increases. That's the current pace of tightening even if the Fed never raises benchmark interest rates again. How far has QT already gone? Good question. The Fed has removed $375 billion from the balance sheet since initiating the program. That means the real feel of that 2.5% Fed Funds rate is really more like 3.125%.... but the public won't understand that until maybe September at the earliest. Now, you understand. Now, you get why Bullard spoke up, and why the FOMC Minutes seemed so cautious. Oh, and that begs me to ask another question. Was Jerome Powell even at that meeting? The press conference on December 19th, and the Minutes released on Wednesday are not even of the same species.

My pivot point for the S&P 500 (cash) is between 2570 and 2575. What the algos decide to do at that spot this morning will be key because many of these algos are simple trend plays... zombies if you will. Should this area fail, the fall could resemble what Poe's condemned man feared most... a deep, dark pit. Conversely, if the level holds, the upside runs as far as the 2640's. 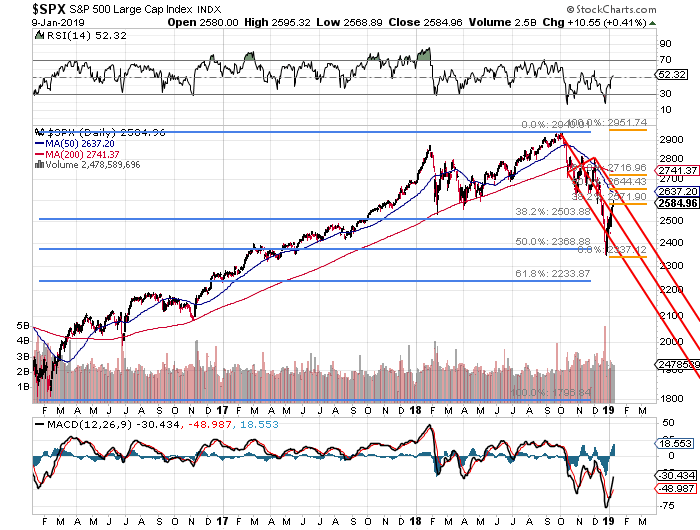 Remember, the downward sloping Pitchfork, in place since October is still in tact, and has yet to be pierced outside of the Christmas Eve , Fed inspired massacre. Short term technicals are supportive, but they themselves are simply data-dependent. The marketplace is up against six Fed speakers today, including the Fed chair, himself. That threat looms around lunchtime. In addition, Treasury auctions off $16 billion worth of thirty year paper today. Is that significant? Are dollar valuations significant? Wednesday's auction of $24 billion worth of ten year notes was praised as having been strong because primary dealers were only needed to take down 22.2% of the issuance. I see it differently. With a bid to cover of 2.51, and indirect bidders only grabbing 56.8% of the block (possibly indicating below average participation by foreign central banks), I see this auction as not weak, but still uninspired.

Oil is lower this morning as well. The zombie algos have surely latched on to the recently very tight correlation between equities and crude so this presents as a potential threat additionally.

Nobody expected this. Shares of Bed Bath & Beyond (BBBY) soared overnight. Have you ever shopped in one of these stores? I wouldn't wish that experience on my worst enemy. In what has shaped up as a stellar season for the retail crowd, BBBY still turned in a rotten performance, just less rotten than expected.

You all know what the Redbook is, right? Reported every Tuesday morning, the Redbook tracks comparable store sales at chains, discounters, and department stores. Throughout the early days of the recovery, the very best of these reports usually hit the tape at year over year growth of 5%, and that was not the norm. As e-commerce sites such as Amazon (AMZN) grabbed more and more market-share, y/y Redbook growth had fallen to little more than zero. The entire industry longed for 2% growth. Fast forward, the year over year print has not hit the tape below growth of 4% since July, worked it's way through the holiday season at a rough 7%, and the last two weeks have printed in the 9% growth area, Truly remarkable.

Still for the quarter reported on Wednesday night (ended on December 1st), BBBY reported EPS of $0.18. That beat by a penny, but the year ago comparison is $0.44. The firm earned revenue of $3.03 billion. That number did show some growth... 2.7% y/y, but missed expectations. Basically, the stock acted so well over night because the firm guided fiscal 2019 to "be about the same as fiscal 2018". Well, woop dee darn doo. 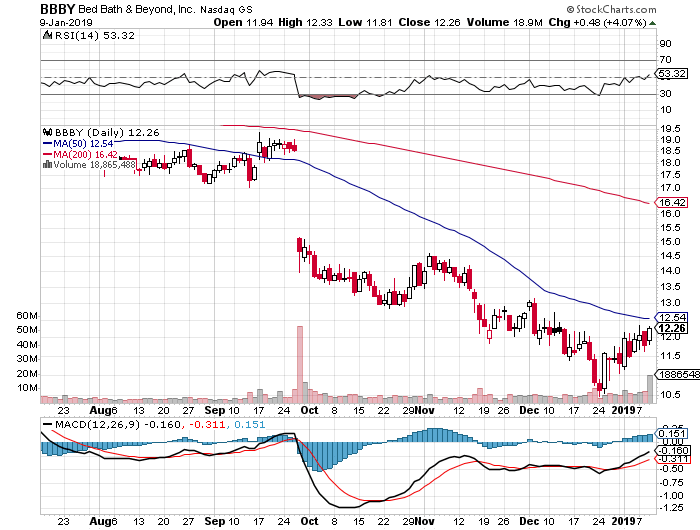 With any luck, the stock will open above $14. Traders long these shares can hope for some support at the 50 day SMA. Risk reward possibilities are not awful here, but I will not get involved, and if I were coming in long, I would likely shave something off of the position on this move. My thoughts....

One share of Kratos Defense (KTOS) is a better long than one share of Bed Bath and Beyond.

One share of Salesforce (CRM) is a better long than 10 shares of Bed Bath and Beyond.

One share of Amazon is a better long than 115 shares of Bed Bath and Beyond.

Long all three? Of course I am.

(Amazon and Salesforce are holdings in Jim Cramer's Action Alerts PLUS member club. Want to be alerted before Jim Cramer buys or sells AMZN or CRM? Learn more now.)

Get an email alert each time I write an article for Real Money. Click the "+Follow" next to my byline to this article.
TAGS: Economic Data | Investing | Markets | Options | Rates and Bonds | Stocks | Technical Analysis | Trading | Retail | E-Commerce