Nvidia (NVDA) has been a Sarge favorite for a long time, and a Jim Cramer name for far longer. In fact, if one trades these markets, then one can probably at this point describe Nvidia by typing their own name first, and then adding the word "fave." I certainly don't know personally any Nvidia bears. How far is too far. The stock is up 60.6% year to date. The stock is now up 147% over 12 months. When is a smart investment less smart. When does aggression become greed. For those invested in Nvidia, not yet. Still the name is out in front where it counts. There are sell-side analysts who have peeled off due to valuation. Let's pop the hood and take a look.

Nvidia will not report the firm's second quarter earnings until August 20th (or so), so there is some time. Wall Street is currently looking for EPS of $1.97 on revenue of $3.65 billion. If these numbers were to end up being "spot on", this performance would be good for earnings growth of 59% on revenue growth of 64.2%. Really? 64.2% sales growth in this, the unpredictable era of Covid-19? With sizable portions of the economy unable to reliably predict anything? Hmm, is this firm, the "chosen one", are they ahead of their time? Maybe, they're just different. Only a one word answer is required. That would be "Yes."

We know where Nvidia is strong. It starts at the top. CEO Jensen Huang is certainly the kind of initiative provoking leader that firms create the brains that run basically all big technology ideas needed in these times. Perhaps Huang's only true peer in the space is Lisa Su, the CEO of Advanced Micro Devices (AMD) . Just my opinion. She just happens to be his niece, in case you did not already know.

Nvidia has provided what business needs most in these times. The firm dominates the GPU (graphics processing) market. The firm is an integral part of corporate America's build-out of the data center, or cloud integration. Especially now following the Mellanox acquisition. Gaming continues to grow. The development of autonomous vehicles has been slow, and slowed further by current events, but that said, there is room for growth and there is news on that front.

It now appears that starting in 2024, newer Mercedes-Benz vehicles will feature artificial intelligence and in-vehicle computing to be co-developed with Nvidia. Drivers will be able to add software, subscription services,and capabilities to include automated driving of regular routes in addition to numerous safety and convenience applications. My thinking is that other automobile manufacturers follow suit. Will that happen more quickly than will the competition catch up?

Just this week, five highly rated (five stars at TipRanks) have opined on Nvidia. All five have "buy" ratings or their firm's equivalent in these shares. Among the five, there are two $420 price targets, as well as three $400 price targets. The gist in general seems to be not just the strides now being made in Automotive, but continued demand in the GPU space. The risk if there is one, and there is, seems to be not in pure demand, but in the ability of the economy itself to support the continuance of trend in transition of the data center to the cloud. 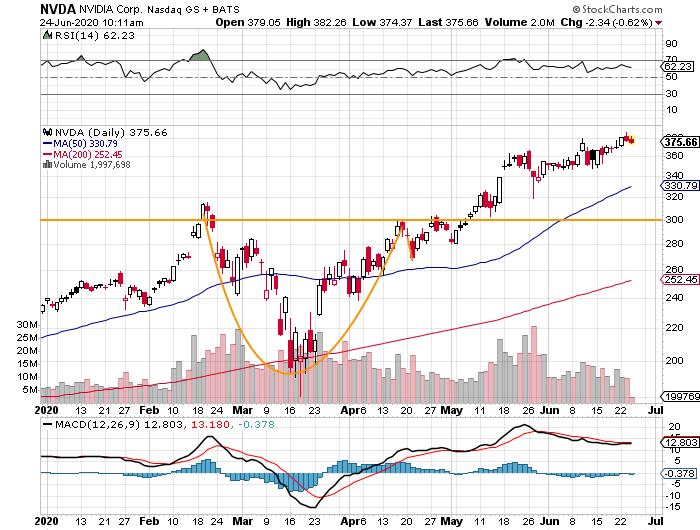 This may be the only clear negative. If one goes off of the $300 pivot created by the cup with handle pattern that stretched from February into March, then the iron is hot. By my method, this created a conservative price target of $360, and a more aggressive target of $375. (Mom, we're home.) So, just an opinion, I wouldn't get out of NVDA. No way. I would consider taking some profit off of the table up here. I already have. A new price target would be under review. I would think that new target to surely be beyond $400, but I do not see a pattern as of yet that would confirm this for me.

Get an email alert each time I write an article for Real Money. Click the "+Follow" next to my byline to this article.
TAGS: Economy | Investing | Markets | Stocks | Technical Analysis | Trading | Software & Services | Technology | Gaming