We reached the short-term overbought reading midweek last week, and since then, the market has done an awful lot of churning up here. But, still, this isn't bearish.

It also takes poor breadth to roll the indicators over. And breadth has only been red two days in the last 10. So that, too, would have to change. It would have to change enough to get the indicators to roll over. For example, the McClellan Summation Index is still rising. It would require a net negative 1,300 advancers minus decliners for it to halt the rise. And then it would need more than that to get it to roll over.

Now look at July. It was not as glaring, but it was there as well. We have not seen that yet in this market. If we do, I will harp away, as I have a tendency to do. But on Monday, when the S&P was down nine points, breadth was positive. 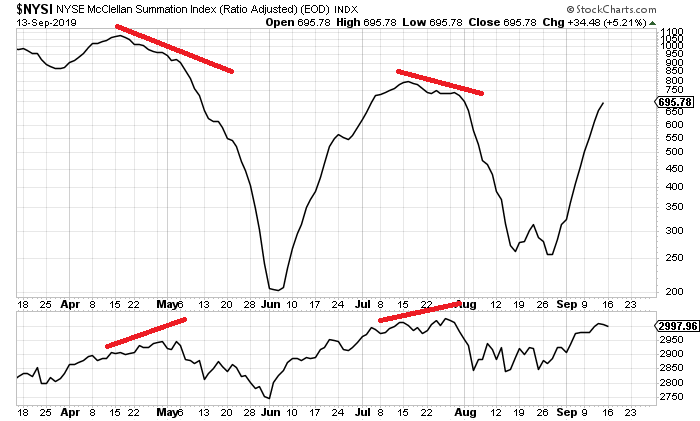 It seems folks got concerned on Monday. Last week we had four straight days with the put/call ratio for exchange traded funds under 100%. Monday that indicator jumped to 180%. The total put/call ratio was 119%, the highest reading since late August.

So, for now I maintain that the short-term overbought has led to a pullback and then we should rally again. I will change that view if and when the indicators roll over or breadth turns sour enough to roll them over.

Get an email alert each time I write an article for Real Money. Click the "+Follow" next to my byline to this article.
TAGS: Stocks | Bearish Bet | Jim Cramer | Investing