I find market players can often be like those involved in politics. Either you must be all in bullish or all in bearish because there is no middle ground. Why not? What's wrong with middle ground?

Over the course of the last week I have had the view that we should see a pick-up in volatility in the weeks ahead. I have not called for a decline in the market because I think that's still up in the air. I mean is a pullback of a few percent a bearish decline? Is a rally of a few percent bullish?

In order to turn bearish I would need to see breadth weaken. Oh sure it was red for three days last week but that was the first such weakness we've seen since the rally began. And while we began last week with the McClellan Summation Index, which is based on breadth, needing a net differential of -3,500 advancers minus decliners on the NYSE to halt the rise in this indicator and we ended with that figure at -300 issues it is still heading up. Why not let breadth get weak enough to roll this indicator over before you get all beared up?

Or what about the number of stocks making new lows? It has not begun to rise yet. Last week's peak reading on the NYSE was 24 on Thursday. I grant you this chart looks like new lows have been flat all year because of those extreme readings at the lows but even if I took those extreme readings off the chart, the new lows would be steady, not rising.

Then there is sentiment. The American Association of Individual Investors' weekly survey showed a sharp rise in bulls but is 40% extreme? No, it's simply a marked change. The 48.6% bulls in the Investors Intelligence survey is also a marked change from 29% but it too is not extreme. Even the Consensus Inc. Bulls at 50% shows a marked change from the 38% they were at the low, but again, there is nothing extreme here.

Add to this the Citibank Panic/Euphoria Model which did a great job of showing too much Euphoria in September/October and too much Panic in late December has moved back to neutral. It's not yet back to Euphoria though. 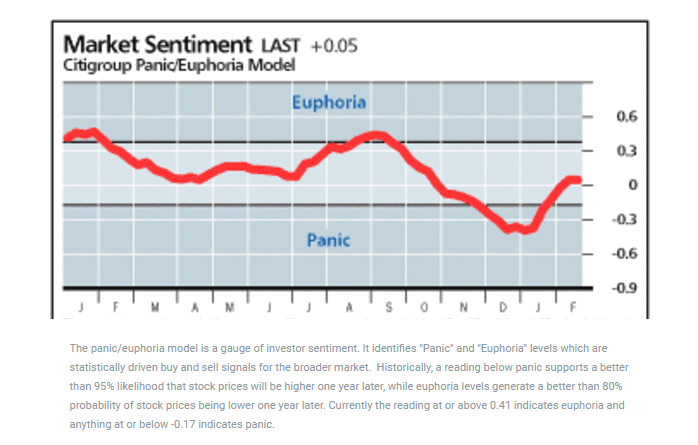 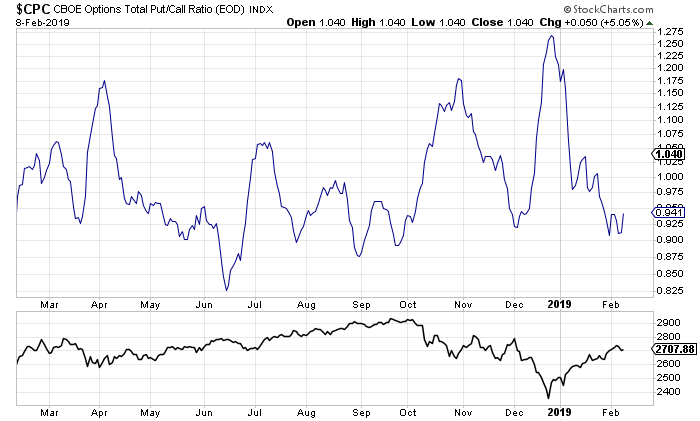 Should breadth weaken and sentiment get more complacent that will concern me but until then I think more volatility is what we should expect.

One final word on bonds. Despite the rally in bonds on Friday sentiment did not change. Therefore it is not extreme yet.