The speech was one of unity. Military hardware rolled on. A high-level Chinese delegation prepared to head to the U.S. in order to talk next week, ahead of a planned next tranche of increased tariffs to be placed upon Chinese imports. There is discussion of restricting U.S. investment in China, while forcing U.S. listing Chinese companies to observe the same disclosure rules as everyone else. Meanwhile in...

I love a parade

The tramping of feet,

I love ever beat

I hear of a drum.

I love a parade;

When I hear a band

You're all potential anarchy burgers

If you wanna be free

Order yourself an anarchy burger

Really... what could possibly go wrong?

Put It In The Books

Both the month of September, as well as the third quarter, closed on a positive note on Monday. The S&P 500 scored an increase of 1.7% for the month, forcing a 1.2% gain for the quarter. So much for September being the worst month of the year. Then again, I've been through a few miserable Octobers, so I still think we tread lightly, and stay vigilant. The Nasdaq Composite did not perform in line with it's broader step-sibling. The more tech-laden large cap index gained just 0.5% for September, which was not quite enough (-0.1%) to put it over the top for the third quarter.

One other disparity in recent markets has been visible in trading volume. While Monday's volume was off a bit from Friday at both of New York's exchanges, volume directly related to the two major indices has behaved differently. On this "up day", S&P 500 volume (this was the final day of both a month and a quarter, volume should have been higher), was at least able to match it's own 50 day SMA. However, Nasdaq Composite related trading volume fell well short of that mark. In fact, September 5th was the last time that the Nasdaq Composite experienced an "up day" on rising volume. Since that day, the index has posted just six "up days", all on anywhere from virtually equal to significantly lower trading volume from the day prior.

What does that tell kids like us? Well, I'll tell you what I think it tells me... I think it obvious that this trend (that actually started to become visible in August) paints a picture of tech under distribution, which fits the whole rotation into value market narrative. The one thing I don't like about this is that perhaps when something like this becomes so obvious, it also becomes too crowded.

Though perhaps crowded, I may be slow to strip off the body armor. Stay cognizant of the deadlines around trade negotiations with China. Stay alert to headline risk created in the sphere of politics. Beware of regions (The Eurozone) that celebrate manufacturing surveys that print slightly less awful than expected, but still deeply in contraction.

No two years are the same. Have traders developed a tougher skin? Have the wounds of the fourth quarter of 2018 calloused over? How much learning can algorithms do? Sure, on the surface, the keyword readers, and momentum bots severely pervert the process of price discovery, but in a world where barely an industry has been untouched by the increasing presence of artificial intelligence, you can bet electronic trading is further ahead on that curve than is the rest of the economy. Do they remember? How will they react if markets wobble on headlines perceived as negative?

The S&P 500 peaked for the last time on October 3rd, 2018, and made three attempts at a rally through late November. That's when the all-out December equity puke fest kicked off in response to policy error at the Federal Reserve. The FOMC meets twice more this year... October 30th, and December 11th. The ECB meets on policy for the last time under Mario Draghi's leadership on October 24th. The Fed's behavior in the wake of that meeting will be key. Christine Lagarde's ECB will not have to make a policy decision until December 12th, so that may not be part of this equation, at least not yet.

So, it's not just what have the bots learned, but what have central bankers learned as well, and how much their environment has been impacted externally. We will see.

You may have known that $434 billion worth of corporate bonds were sold across the globe in September for a monthly new record. Did you know that the largest slice of this issuance ($159 billion) was denominated in U.S. dollars? That $17 billion flowed into U.S. bond funds for the month, a 38th consecutive month of net inflows?

It's no small wonder that corporations might go to the well, even if they don't need to, as the credit is cheap, and investors aggressive in their search for yield. The average yield on a U.S. investment grade bond index runs at just below 3%. That's versus roughly $15 trillion worth of debt globally that runs at negative yields. This is also one reason why the US Dollar index (DXY) is trading at it's highest levels since early 2017.

US Treasury Yields on The Move

You likely have already noticed a pop in what the US 10 year note is paying this morning. Monthly/quarterly rebalancing? Sure. That has some impact. The real deal, however, I believe came in the Bank of Japan's publication of it's October schedule for it's asset purchasing. The Japanese central bank is indicating that October purchases may be reduced from September.

Remember, Japanese 10 year paper yields -0.15%. The central bank's policy is to keep that yield around zero percent (ZIRP). Why not let those yields normalize somewhat? Makes perfect sense for the Bank of Japan to actually step back a bit. Yields across the developed world have relaxed just a bit on this news.

Now, this catches my attention as far as potential new issues are concerned. We're not talking about Peloton (PTON) , or Lyft (LYFT) , or Uber (UBER) . We're talking profits and cash flow... and dividends.

Over the weekend, Prince Mohammed bin Salman (Crown Prince, Saudi Arabia) warned that tensions between the Saudis and Iran could lead to "unimaginably high numbers" regarding oil prices. If war should break out, the crown prince mentions the possibility of "a total collapse of the global economy." If anything, the man indeed, is an oil salesman, so though nobody anywhere wants to see war break out, keep that in perspective.

The news, though came on Monday. Saudi Aramco, though still not publicly listed anywhere, announced an annual dividend of $75 billion. Is this interesting? Certainly. At a valuation of $2 trillion, which is likely unrealistic, but is what the Kingdom is aiming for, that would be a yield of 3.75%. The truth is that this yield, though good relative to the broader equity market would be sub-par in the energy space for major producers. Then again, should the valuation price a bit more realistically, the annual dividend would become that much more attractive.

More important to investors will be where the sliver of the firm that is made available to the public eventually lists. The accessibility of the retail investor in the secondary market will have as much to do with long-term valuation as anything else. In the meantime, BP PLC (BP) , and Royal Dutch Shell (RDS.A) both pay investors roughly 6.4% just to hang around.

On Monday, Mizuho Securities noted longer wait times for delivery of iPhone 11 handsets versus last year's roll-out. It was JP Morgan analyst Samik Chatterjee that juiced the stock of Apple (AAPL) however. Chatterjee reiterated his rating of "overweight", while ramping his target price from $243 to $265. Chaterjee points out that he thinks iPhone sales are outperforming what he referred to as "muted" expectations.

This comes just about a week after Kyle McNealy of Jefferies (positive), and KeyBanc's Any Hargreaves (less than positive) viewed the shares differently based on the company's transition toward a services provider. 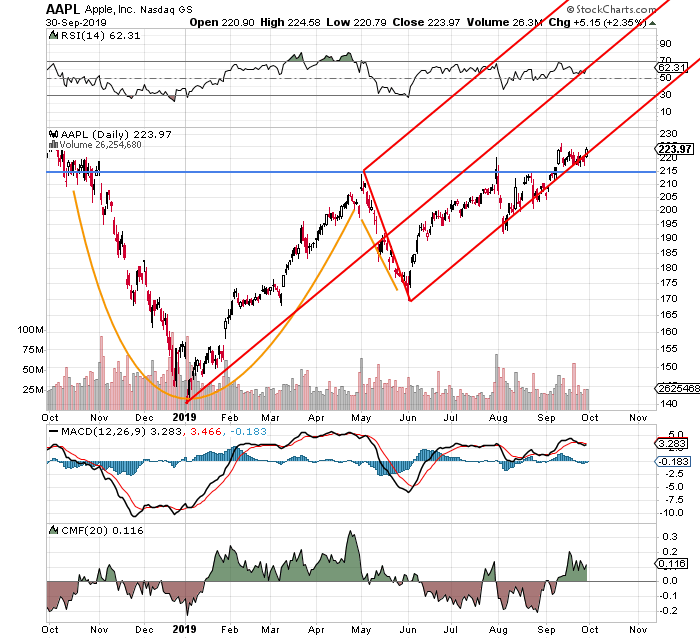 Your pal (that's me) still has a $240 target price on the name, and still carries a long position. What I see on this chart is the same cup with handle pattern that I have drawn for you before. What I like here is that the shares have retaken the pivot off of that formation, and then used that line as support.

The red pitchfork here is also constructive. Very interestingly, using the "Christmas 2018 low" as a starting point, and the "handle" as the formation of the trident, the shares were able to absorb the mid-summer selloff without breaking this pattern. In fact, the shares continue to ride the lower trend line. Earnings loom on October 30th.

As of last night, November 1st $195 puts were still paying more than a buck. Easy money? Once one thinks that way about selling puts, that's where real trouble can start. This is however, food for thought.

(BP and Apple are holdings in Jim Cramer's Action Alerts PLUS member club. Want to be alerted before Jim Cramer buys or sells BP or AAPL? Learn more now.)

Get an email alert each time I write an article for Real Money. Click the "+Follow" next to my byline to this article.
TAGS: Federal Reserve | Investing | Markets | Options | Stocks | Technical Analysis | Trading | China