Western Digital Corp. (WDC) is making a comeback. Can the advance continue? Do we have any price targets? Let's check out the price charts and indicators.

In this daily bar chart of WDC, below, we can see some recent improvement after a long and painful decline from March. In less than twelve months WDC was marked down from $105 to $35 - not a pleasant experience. The slope of the 50-day simple moving average line was negative from early May but is looks like it has finally flattened out and is ready to turn higher. The slower-to-react 200-day moving average line has also been in a downtrend and is well above the market. A bearish death cross of these two averages can be seen in late May. The On-Balance-Volume (OBV) line turned lower in late May and only recently broke that downtrend and turned higher. Sellers were more aggressive for more than seven months but a shift to more aggressive buyers seems to be underway. The Moving Average Convergence Divergence (MACD) oscillator crossed to the upside in late December for a cover shorts buy signal. At the end of January the MACD indicator crossed the zero line for an outright buy signal.

In this weekly bar chart of WDC, below, we can see a slow turnaround for WDC. Prices have broken their downtrend from last year but are still well below the declining 40-week moving average line. The weekly OBV line shows a pick-up in recent weeks but it is a long way below its highs. The weekly MACD oscillator crossed to the upside below the zero line for a cover shorts buy signal but an outright buy signal is likely to be weeks if not months away.

In this Point and Figure chart of WDC, below, we can see a base pattern since October (look for the "A" on the chart). A trade at $49 will be an upside breakout. A $69.00 price target is being projected. 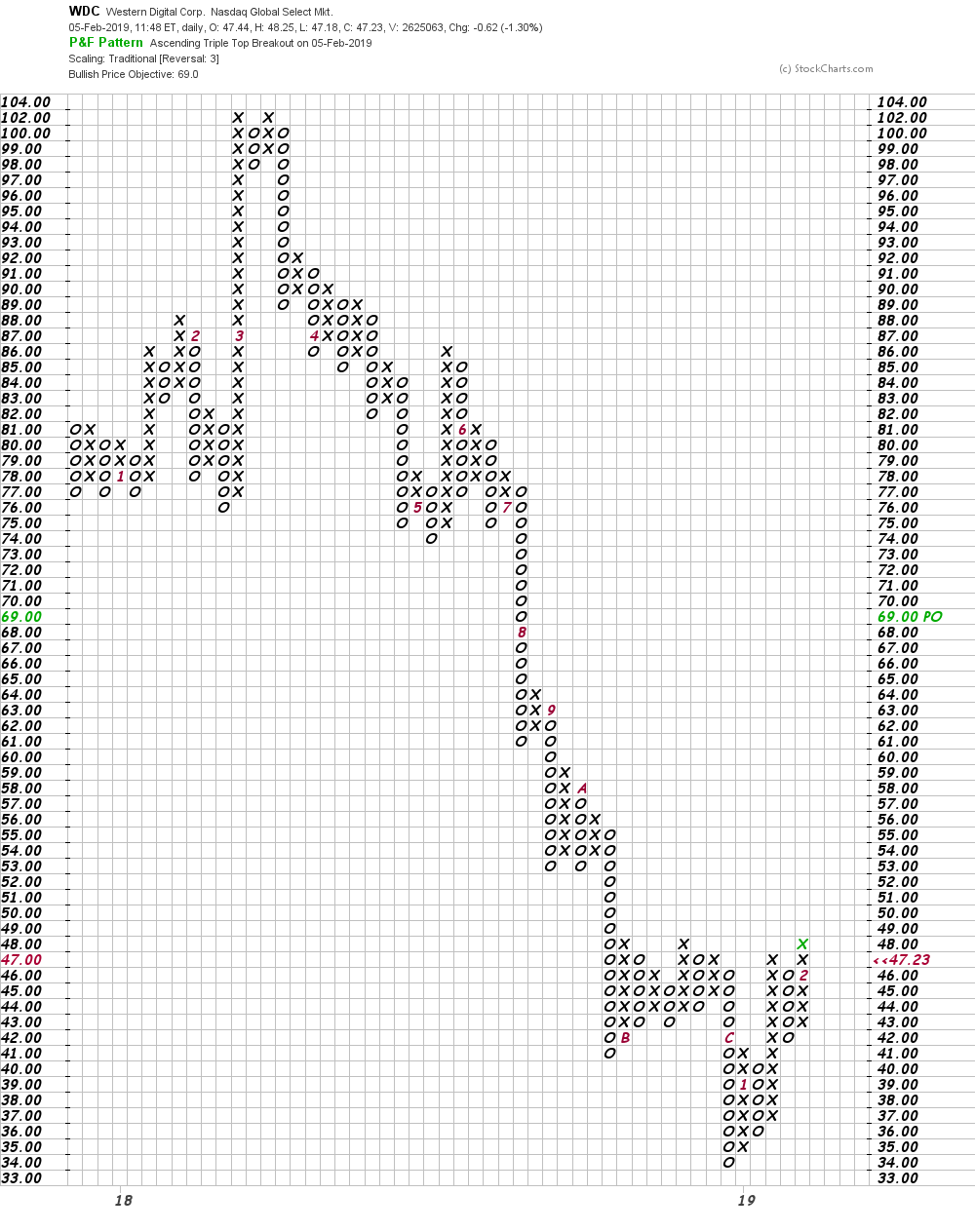 Bottom line strategy: WDC did not correct lower for three months but rather for ten months. A quick turnaround does not seem to be in the cards, in my opinion. I would look for WDC to trade sideways and build a more durable base pattern in the weeks ahead.

Get an email alert each time I write an article for Real Money. Click the "+Follow" next to my byline to this article.
TAGS: Investing | Technical Analysis | Semiconductors & Semiconductor Equipment