On Friday morning, Deere & Co (DE) released the firm's fiscal third quarter financial results. These results were really, really strong, but were they strong enough? For the three month period ended July 31st, Deere posted GAAP EPS of $6.16 on revenue of $14.102B. The sales number was good enough for year over year growth of 22.3%, while the earnings per share print, while up from $5.32 for the year ago comp, badly missed Wall Street's expectations. Net income increased 13% year over year to $1.884B. However, total operating expenses increased 23.3% to $11,563B

In the press release, CEO and Chair John May said, "We're proud of the extraordinary efforts by our employees to increase factory output and get products to customers under challenging circumstances. At the same time, our results reflected higher costs and production inefficiencies driven by the difficult supply-chain situation."

Deere & Co ended the quarter with a net cash position of $5.078B and inventories valued at $9.121B. This brought current assets up to $69.645B. Current liabilities amounted to $32.082B including $14.176B in short-term debt and $4.92B in short-term securitized borrowings. The firm's current ratio stands at a very strong 2.17. Less inventories, the quick ratio works out to 1.88, which is still quite robust.

That said, the size of the short-term debt-load versus the cash balance does bother me some. The real strength in this current environment is in receivables, which across four categories total $48.892B. I guess as long as one's customers remain solvent....

The ratios all work out as to not raise alarm, but one has to believe that there is no risk in a balance sheet so heavily in debt, so light on cash, so light on property and equipment and so heavily reliant upon receivables in order to be overtly bullish here.

So far, it appears that demand is not an issue. There's good reason to believe that with the breadbasket of Europe unable to produce for potentially an extended period of time, that demand for what Deere & Co provides will be strong throughout, as there will have to be an effort globally to produce grains and crops more broadly elsewhere.

The problem is in the sagging margin. Not the end of the world, but margins are moving in the wrong direction. If you've made it this far, then you already know that I am not in love with the balance sheet, though I did not give it a failing grade. The stock trades at 15 times forward looking earnings, which is less than the 18 times that the S&P 500 trades at. That's likely at least partially a debt-load related discount. That does not mean that the stock is inexpensive. 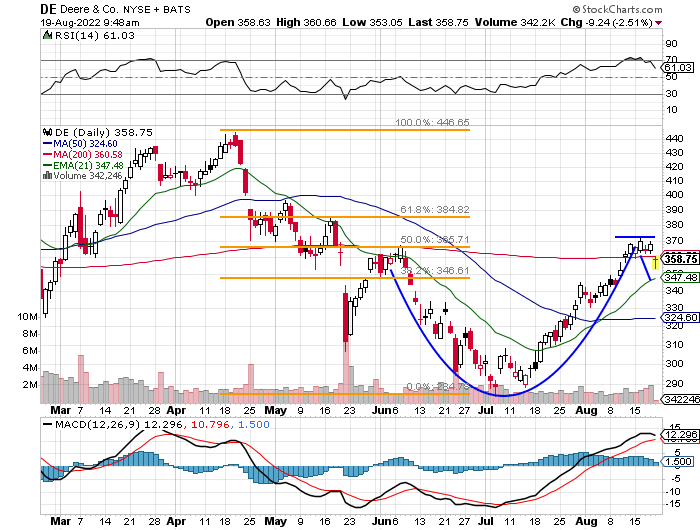 The bulls will see this morning's weakness as the development of a handle to go along with a cup pattern that has created a $373 pivot. The bears will note that DE has given up its 200 day SMA this morning and that will force exposed PMs to reduce their risk if the line is not quickly retaken.

I don't need to have a position in DE. I am however, tempted to go out and sell September 16th $330 puts for about $3.10. There is a chance, should markets sell off broadly that the 50 day SMA comes into play for DE. At that level, I think the stock would be a buy. Might as well get paid to take on the risk if so inclined.

(Deere & Co is a holding in the Action Alerts PLUS member club. Want to be alerted before AAP buys or sells DE? Learn more now.)

Get an email alert each time I write an article for Real Money. Click the "+Follow" next to my byline to this article.
TAGS: Economy | Investing | Markets | Stocks | Technical Analysis | Trading | Agriculture | Manufacturing