In his second "Executive Decision" segment Wednesday night during his Mad Money program on CNBC, Jim Cramer spoke with Todd Penegor, president and CEO of Wendy's Co. (WEN) , the burger chain. WEN is up 3.9% after the company posted a three-cents-a-share earnings beat the other day.

After a tough winter, Wendy's is back, Penegor said. The restaurant chain is focused on their "one more visit" and "one more dollar" initiatives, which aim to get customers to trade up to more premium offerings.

When asked about delivery, Penegor explained that Wendy's is all about convenience. They pioneered the drive-thru window and now they are partnering with delivery companies. Let's round out our analysis and check out the price charts and technical indicators this morning.

In this daily bar chart of WEN, below, we can see that prices stalled several times in the $18.00-$18.50 area, but the indicators and the price action has strengthened the past four or five weeks. Since early April WEN has been above the rising 50-day moving average line and above the rising 200-day line. A bullish golden cross of these two indicators can be seen in early April.

Prices just made a new high and new high close and the rising On-Balance-Volume (OBV) line tells us that buyers of WEN have been more aggressive since March.

The Moving Average Convergence Divergence (MACD) oscillator is above the zero line and poised for a fresh buy signal.

In this three-year weekly bar chart of WEN, below, we can see a mixed picture. Prices are in an uptrend with higher highs and higher lows. WEN is trading now above the rising 40-week moving average line so we know we are in an uptrend based on math.

A decline in the weekly OBV line since early 2018 suggests that there has been a significant amount of liquidation (selling) for around 16-17 months. The downtrend could be reversing but it is too soon to tell in my opinion. 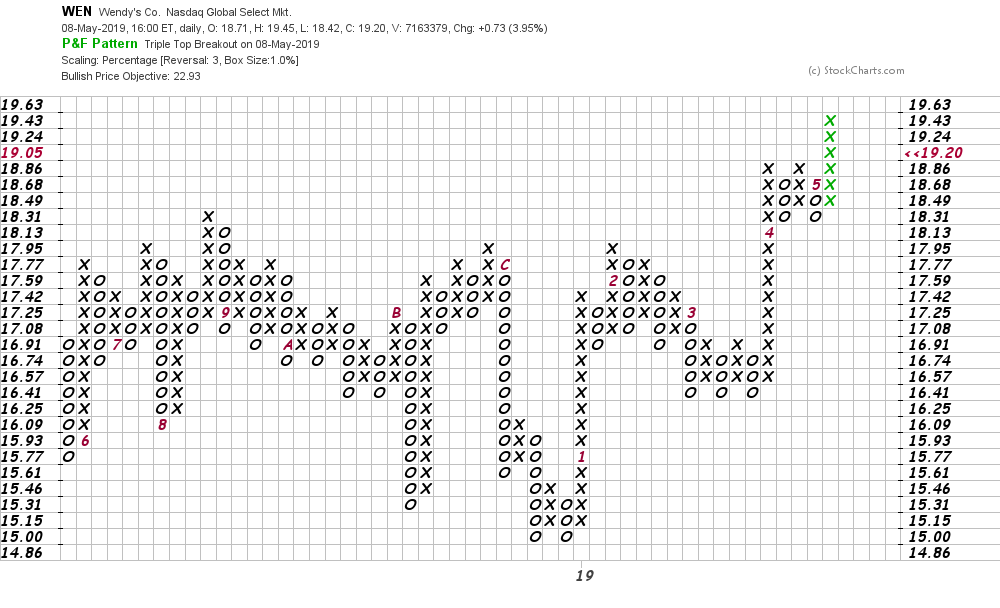 Bottom line strategy: WEN does not have a big upside target based on the Point and Figure chart but the trend is up and I would trade WEN from the long side, risking a close below $18. My target would be the $23-$25 area.

Get an email alert each time I write an article for Real Money. Click the "+Follow" next to my byline to this article.
TAGS: Investing | Consumer Services | Food & Drink | Restaurants | Mad Money | Executive Interview