During the 'Lightning Round' segment of Mad Money this past Friday night, one caller asked about Wells Fargo & Co. (WFC) : "I'm a buyer of Wells Fargo," replied Jim Cramer the host of the program.

In this daily bar chart of WFC, below, we can see that the price of WFC has been in an uptrend since August. Prices turned higher in September and pulled back in October to retest the rising 50-day moving average line and the bottoming 200-day line. By late October the 50-day average line crossed above the 200-day moving average line for a bullish golden cross of these two indicators.
The daily On-Balance-Volume (OBV) line has also strengthened significantly since August and tells us that buyers of WFC have been more aggressive.
The Moving Average Convergence Divergence (MACD) oscillator moved above the zero line in September for an outright buy signal that still continues in November.

In this weekly bar chart of WFC, below, we can see a positive looking chart. WFC is above the now rising 40-week moving average line.
The weekly OBV line has been bullish since December and tells us that buyers of WFC have been more aggressive all year. The MACD oscillator moved above the zero line last month for an outright go long signal.

In this Point and Figure chart of WFC, below, we can see that prices broke out to the upside at $51.02 and a first price target of $63 is being projected. 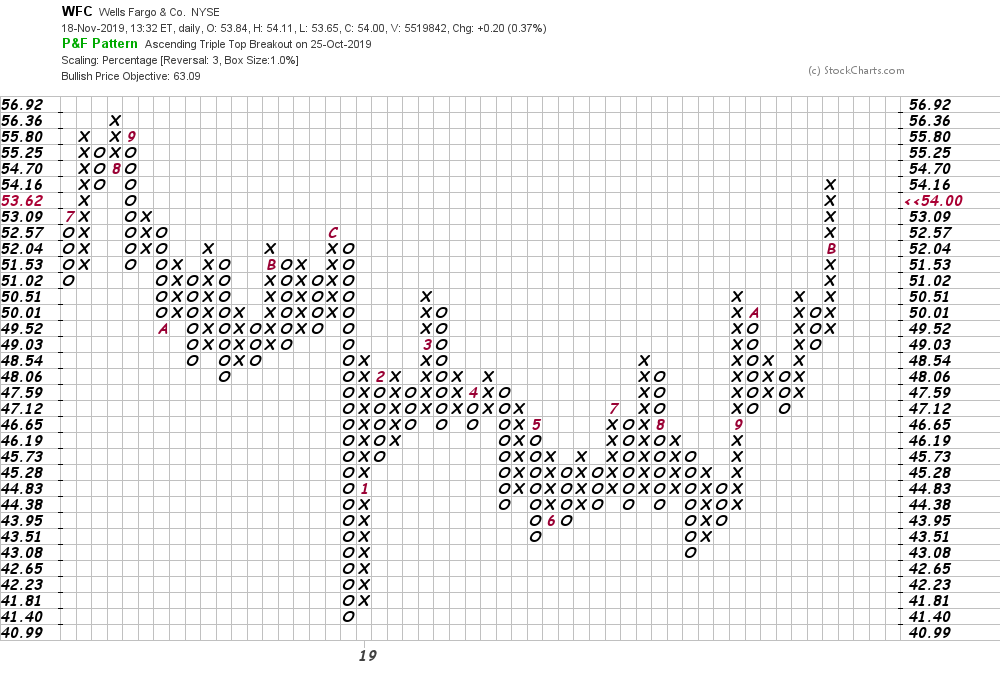 Bottom line strategy: It wasn't all that long ago that WFC was getting hit with body blows from consumers and regulators but today the charts have changed and now WFC is looking pretty positive. Traders could go long WFC or add to longs in the $54-$53 area risking below $52 while looking for $63 on the upside.
Get an email alert each time I write an article for Real Money. Click the "+Follow" next to my byline to this article.
TAGS: Investing | Stocks | Technical Analysis | Trading | Banking | Financial Services | Mad Money