The Ghost of Seasons Past

The results are in for Wells Fargo (WFC) . Mixed might be the right description. Did anyone expect anything better? In some ways, yes. In other ways, no. Just how meaningful are these results? Of course, performance matters, but investors are forward looking. For this name, this is especially true. The past is well known, going back to 2016, when less than desirable headlines that would ultimately end up seeing two successive chief executives lose their jobs, first erupted. Since then, the firm has been mired in an ongoing era of heightened scrutiny, not to mention doing business in an understandably heightened regulatory environment.

The good news is that after operating without a permanent leader for six months, the firm has hired former Bank of New York Mellon CEO Charles Scharf to assume that position with Wells Fargo. Scharf will take the reigns next week (October 21st), as investors in the name hope a new era dawns.

Wells Fargo reported Q3 adjusted EPS of $1.07 and GAAP EPS of $0.92. Both missed Wall Street's consensus expectations quite handily. Revenue however surprised those very same analysts to the upside at $22.01 billion, while posting slight year over year growth. That bottom line per share result certainly does catch the eye of the investor (who I am) as net income hit the tape at $4.6 billion down from a cool $6 billion one year ago.

These numbers as one might have anticipated, are understandably (in my view) sloppy. The firm had to take a $1.6 billion non-tax deductible charge for litigation costs related to the sales practices scandal that reared it's head three years ago. That's worth about $0.35 per share. Against that charge, the firm realized a $1.1 billion gain from the sale of the Institutional Retirement and Trust business.

Also as anticipated, net interest income took a hit, printing at $11.6 billion, down 7.5% from $12.547 billion. Net interest margin for the quarter landed at 2.66%, down from 2.94% for the same period in 2018. Non-interest related income did improve quite significantly to $10.4 billion, up 8.8%. Average deposits are up as are average loans. Average loans saw growth at the consumer level that offset a lack of growth in commercial loans. The growth in deposits might largely be attributed to promotional rates that in turn pressured the already mentioned net interest margin.

Return on tangible common equity might be problematic at 10.7%. That's down from 14.33% last year, and from a now lofty 15.78% just last quarter. Tangible book value as of the quarter's end stood at $33.84 per share, up slightly from the second quarter, and up from $31.49 a year ago. At a last sale that I see this morning of roughly $49.05, this has the shares trading at 1.45 times tangible book. For reference, JP Morgan (JPM) a money center that appears to be performing at a much higher level, is trading at 1.96 times tangible book this morning.

The Coast Is Not Clear

Though the domestic economy does appear to be engaged in an environment headed toward easier monetary policy, this is no sure thing. While indications are that the Federal Reserve may reduce the Fed Funds rate again in December, the central bank's plan to increase the size of the balance sheet over the net six months is specifically targeted toward the short end of the Treasury curve. This could actually have a positive impact on net interest. The all-important 3 month/10 year spread un-inverted on Friday, and has held that un-inversion so far on Tuesday morning.

However, that same Federal Reserve has capped asset growth at Wells Fargo in response to it's past problems in customer service. On Tuesday morning, interim CEO Allen Parker stated that the bank has more work to do. Nothing could be truer for incoming CEO Charles Scharf. For what it's worth, shares of Bank of New York Mellon (BK) fell precipitously over the days following his announced departure. 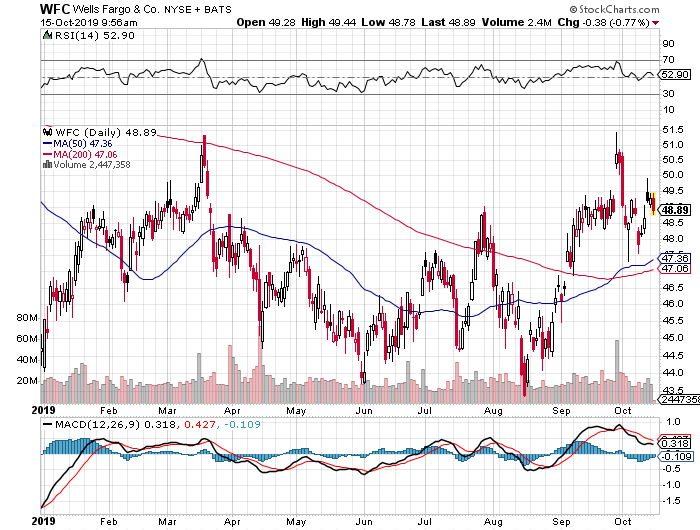 What we see here besides obvious resistance at $51.50, is the ability of these shares to take both the 50 and 200 day SMAs in early September, and then hold above those rising averages as the name benefited from a "golden cross."

I came in long the shares this morning with a target price of $59, and a panic point of $43. For me, I would think an add would be likely should those key averages face a test prior to the new CEO taking office on Monday. Going froward, I would rather bet on improved metrics as one would think as there often is a new energy in corporate execution under the new management, especially when that hire is a known professional hired away from a competitor.

The firm has a history of returning capital to shareholders. This includes not just through the share repurchase program, but an annual dividend of $2.04, yielding 4.1%. That dividend, if sustained is reason enough for me to stick around.

Get an email alert each time I write an article for Real Money. Click the "+Follow" next to my byline to this article.
TAGS: Earnings | Investing | Options | Stocks | Technical Analysis | Trading | Banking | Stock of the Day