Jim Cramer talked about Wells Fargo & Co. (WFC) Wednesday night on Mad Money as its CEO, Tim Sloan, was once again called to testify before Congress about its 2016 cross-selling scandal. Surprisingly, Wells Fargo's shares barely budged on the news, and Cramer thinks the risk/reward is starting to look pretty compelling.

There's a lot of pessimism still surrounding Wells Fargo, Cramer said, but it's been a full two years since the scandal first broke and Sloan has been hard at work cleaning up the company culture.

WFC is again on offense, Cramer added, delivering its highest earnings per share in its 166-year history. The bank's net interest margins are increasing, along with its overall efficiency. Cramer also said Well Fargo's shares may not yet be ready to rally, but they certainly have a lot less downside than many people think.

With that fundamental background, let's take a look at the charts and indicators again.

In this daily bar chart of WFC, below, we can see that the stock price has recovered from its December nadir and prices are above the now rising 50-day moving average line but that about does it for the positives.

WFC is still below the declining 200-day moving average line. The volume of trading has declined from the pace seen in December and the daily On-Balance-Volume (OBV) line has been "flat lined" the past three months. A stock that rallies on declining volume and a flat OBV line does not give me confidence.

The Moving Average Convergence Divergence (MACD) oscillator is above the zero line but the two moving averages that make up this indicator are right on top of each other so their next direction will be strongly influenced by the near-term movement of WFC.

In this weekly bar chart of WFC, below, we can see that prices are below the declining 40-week moving average line.

The weekly OBV line shows a peak in January 2018 and the past three months are neutral at best.

The weekly MACD oscillator crossed to a cover shorts buy signal in early February but it is a long way to reaching and crossing the zero line for an outright buy signal.

In this Point and Figure chart of WFC, below, we can see an upside price target of $54.90 which would be a breakout over the $54.16 high but would still be in a downtrend from early 2018. A decline to $47.59 would probably be bearish. 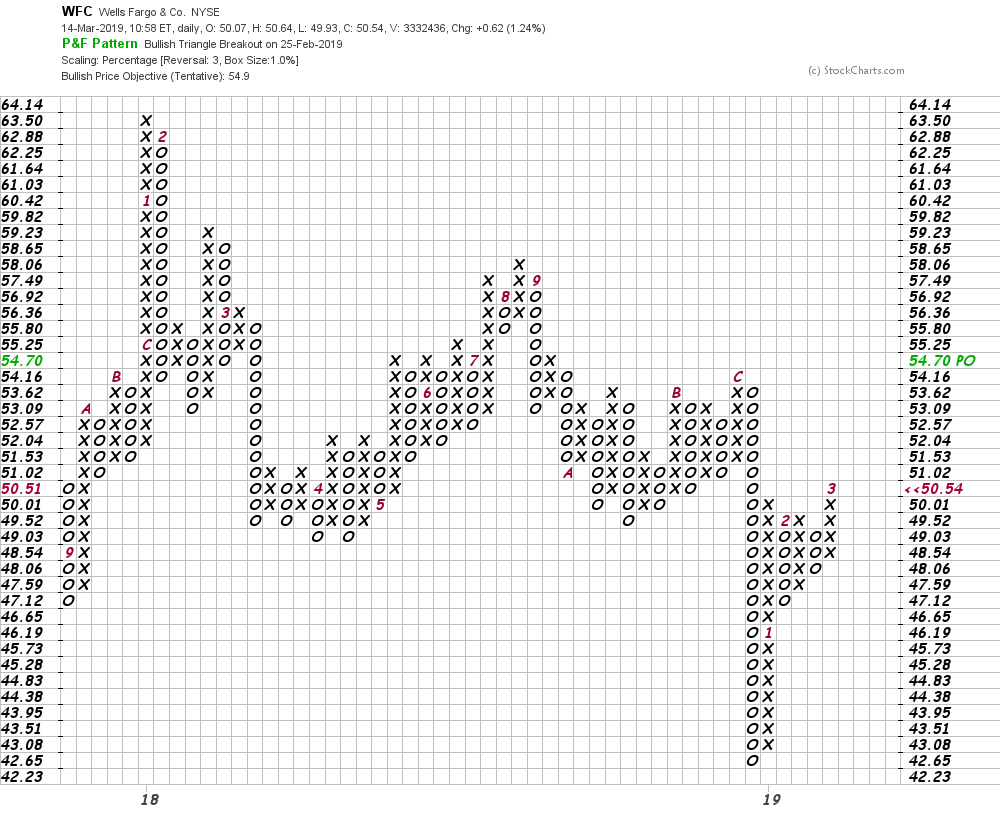 Bottom line strategy: There appears to be a disconnect with many savvy fundamentally oriented investors who are bullish on WFC and the price action which is mostly bearish. I will turn bullish on WFC when I see the technical evidence that prices can move up in a sustained fashion.

Get an email alert each time I write an article for Real Money. Click the "+Follow" next to my byline to this article.
TAGS: Investing | Stocks | Technical Analysis | Trading | Banking | Diversified Financials