For his "Executive Decision" segment of "Mad Money" Friday, Jim Cramer sat down with Tim Sloan, president and CEO of Wells Fargo & Co. (WFC) . Sloan is the man whose job it is to turn the bank around. Sloan said he has been tasked with finding problems at Wells Fargo and fixing them. He said the bank has upgraded its leadership, reorganized and centralized its management structure in order to have better oversight, changed its compensation plans and introduced new products and services.

While Sloan said more work remains to be done, the company did just report its highest earnings per share in 166 years. When asked about the criticism that Wells Fargo still is receiving from some regulators and members of Congress, Sloan said he doesn't believe management deserves to be criticized for taking responsibility and working to fix the issues at hand. Is this a turnaround story? Let's check the charts.

In this daily bar chart of WFC, below, we can see a decline from last January to the end of December. Prices have recovered this month, but the indicators do not yet suggest this improvement will continue. Prices are stalling at the bottom of resistance -- the lows of April and October (or prior support). Prices are above the 50-day moving average line, but the slope of that indicator is still negative. The slower-to-react 200-day moving average line is bearish and intersects just below $54.

The daily On-Balance-Volume (OBV) line line shows a drift lower the last 12 months, which suggests sellers of WFC have been more aggressive. The trend-following Moving Average Convergence Divergence (MACD) oscillator has just crossed the zero line for a buy signal.

In this weekly bar chart of WFC, below, we do not have much of a bullish case to present just yet. Prices recently retested the lows of late 2016. Prices are below the declining 40-week moving average line. The weekly OBV line shows the same negative trend as the daily chart. The weekly MACD oscillator is poised for a cover shorts buy signal.

In this Point and Figure chart of WFC, below, we can see a top or distribution pattern and a potential downside price target of $33. A rally to $56 is needed to really improve this chart. 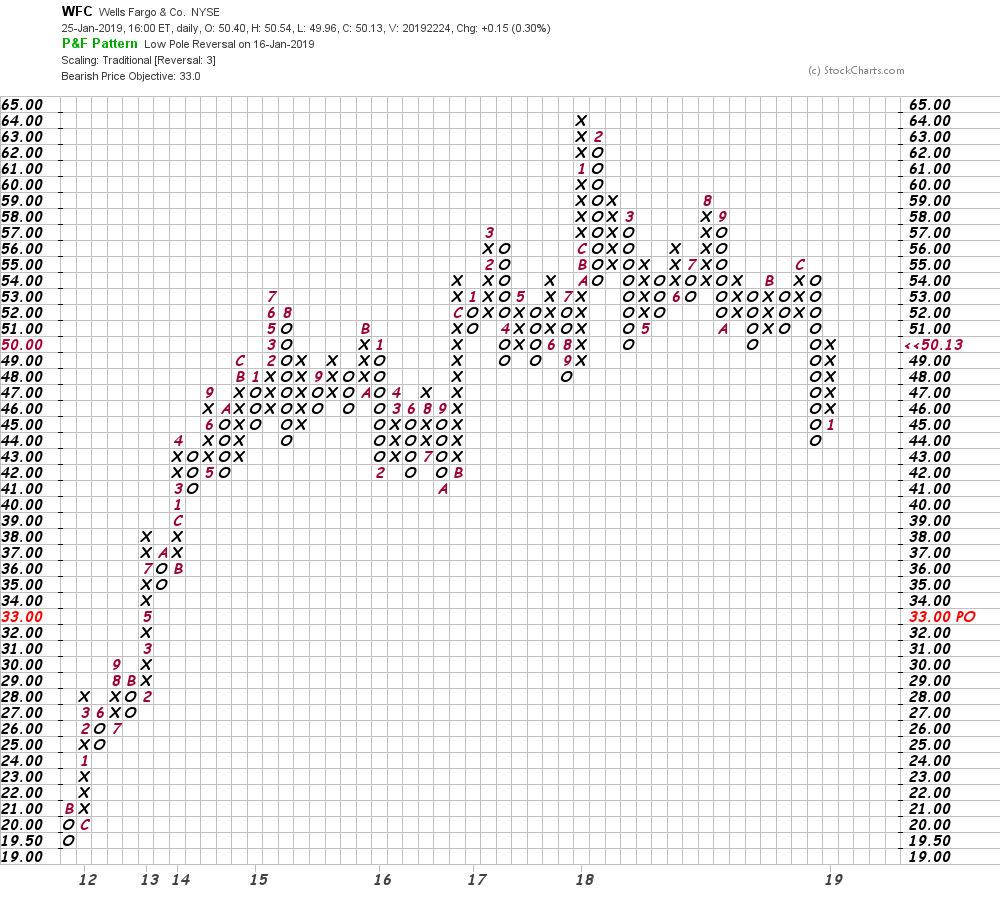 Bottom line strategy: With overhead chart resistance in the $50-$56 area and a lack of signs of aggressive buying, I cannot get excited about the long side of WFC at this point in time.

Get an email alert each time I write an article for Real Money. Click the "+Follow" next to my byline to this article.
TAGS: Investing | Stocks | Technical Analysis | Banking | Financial Services | Real Money