Clearly Wednesday's action was not what I had in mind. Even if we didn't rally, I expected the selloff would be mild not extreme as it was. But the market had other ideas in mind.

The most curious part is that if you squint you can see the Overbought/Oversold Oscillator turned up anyway. That's because we replaced a big negative number with a smaller negative number. So in essence we are using up the oversold reading by being less bad. Remember these are momentum indicators so while it seemed awful, there was actually a loss of downside momentum on Wednesday. That's not what I thought would happen but as discussed here yesterday, oversold markets that can't rally and use up the oversold by going sideways are weak ones.

There is one other curious item with breadth. Would it surprise you to know that the cumulative advance/decline line is still higher now than it was in February? It is, and not by a smidge either. Notice the negative divergence (red lines) that we had at the highs. Now see the green arrows on breadth (top chart) show a higher low (for now). 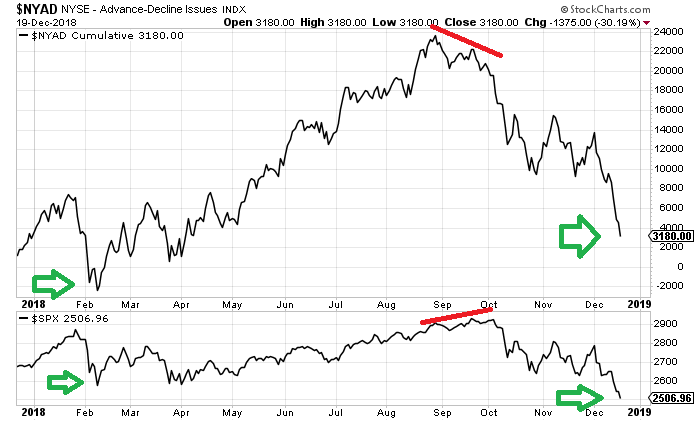 On the negative side of the ledger we have (HYG) and (JNK) falling apart. We also have a Dow Theory Sell Signal in hand. Yes Dow Theory signals tend to be late because they require both the Industrials and the Transports to make lower lows so by the time you get the signal it's late, but it doesn't change the fact that the Transports and Industrials are now confirming each other. But this is in keeping with the longer-term negatives in the market.

There is one more chart I would like to show you. I have taken the labels off it because I would like you to be totally objective. The first thing I notice on this chart is that the declines look so orderly and the rallies look so lively. The other thing is that there was a breakout this week. Would you buy this chart? Would you chase it or would you like to buy a pullback to the line?

That's an important question. So stop and consider it before I tell you what it is a chart of. It is the S&P turned upside down. That means the rallies we saw in 2018 are the declines on the chart and vice versa. And if you were one who said you would prefer to buy a pullback to the line then you'd find yourself in my camp because an oversold rally should take us back to the breakout, shouldn't it?