Backyard grilling favorite Weber Inc (WEBR) , the global leader in outdoor cooking, reported the firm's fiscal third quarter financial results on Monday morning. The numbers were a little on the crispy side.

For the three month period ended June 30th, Weber posted GAAP EPS of a loss of $0.41 on revenue of $526.84M. The top line print, while down 21.1% year over year, at least did best expectations by a smidge. The bottom line? Missed by a mile. Expectations were for EPS of about $-0.04. Perhaps we could have seen this coming as a key competitor in the outdoor grill market, Traeger (COOK)  , just last week also reported a sizable quarterly earnings miss.

The firm states that the 21.1% decrease in revenue was driven by slower retail traffic both in-store and online in all key markets due to (wait for it...) inflation. (The firm didn't say "wait for it", that was me.) as well as supply chain constraints, geopolitical uncertainty, and fuel prices, as well as exchange rate issues. Foreign exchange accounted for $33M of the total year over year decline, which amounted to $141M. Net sales decreased 19% in the Americas to $274M, by 24% to $233M in the EMEA region (Europe, Middle East, Africa), and by 5% to $23M in the APAC area (Asia, Pacific).

In addition, subsequent to quarter's end, as announced in late July, the firm's board of directors suspended the quarterly cash dividend. The Company is now assessing financing options in order to strengthen the balance sheet and is committed to working with lenders to remain in compliance with its credit agreement.

Weber ended the quarter with a net cash position of $40.8M, receivables of $279.6M, and inventories of $396.7M, leaving current assets at $800.1M, which was down significantly from three months ago. Current liabilities add up to $571.4M including $379.7M in accounts payable and $63M worth of debt labeled as current.

This leaves the firm's current ratio at 1.4, which implies that Weber likely can meet the firm's short to medium-term obligations. However, given the uncertainty around inventory valuations in this environment, removing inventories leaves Weber with a quick ratio of just 0.71. That's hardly comforting.

Total assets amount to $1.722B including $236.4M in "goodwill" and other intangibles. I would not consider that to be abusive. Total liabilities less equity comes to $1.965B including $1.216B in long-term debt. Yes, I find the size of the debt-load to be quite daunting, especially given the paltry (in comparison) cash position and the negative imbalance between receivables and payables. The firm understands this or they would not have cancelled the dividend and announced a willingness to work with lenders.

Unfortunately, net cash used in/provided by operating activities printed at $-233.6M for the nine months ended with this fiscal third quarter. This was down from $+74.5M for the year ago nine month comp. 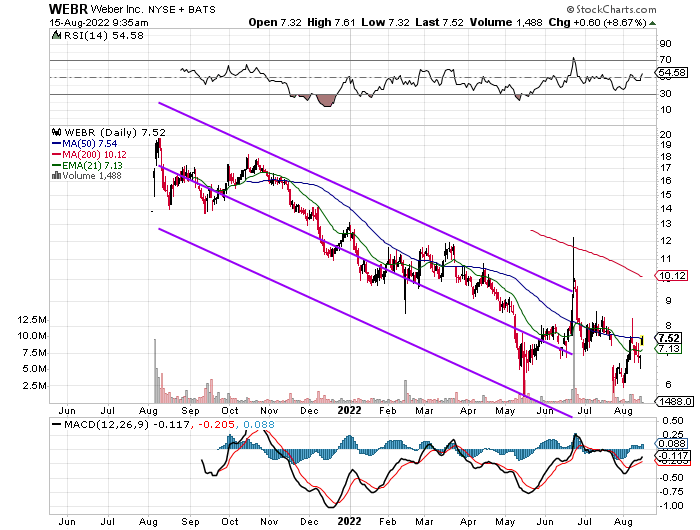 Readers can see that WEBR has pretty much been in a downtrend since apexing at $20.44 on its fourth day of trading. The stock closed on Friday at $6.92, which is 32% discount to its own 200 day SMA. That's kind of tough to do for a stock that's only been public for a year. Incredibly, after being under pressure for almost a full year, the shares emit a neutral relative strength reading. The implication? Could be more downside.

Am I suggesting that WEBR could become a meme stock? Not necessarily, but a short squeeze like the one experienced on June 23rd certainly is still possible.

I know that I am not interested in investing in the business, though I do think that their grills are the best. I tend not to short names, at least not to hold short longer than a few hours in names that come bearing short interest that covers 8% of the float or more. I would perhaps consider a short only if the investor also went out and spent the $0.85 to $0.90 on the purchase of December $10 calls just as protection as well.

For the long only crowd, I would rather sell December $5 puts for a rough $0.65 than purchase the equity, especially with the shares trading up on the day so far. This way, if the shares never sell off, the investor pockets the premium. If the investor does get tagged with the shares at least the net basis for the trade would be down around $4.35.

Get an email alert each time I write an article for Real Money. Click the "+Follow" next to my byline to this article.
TAGS: Earnings | Economy | Investing | Stocks | Technical Analysis | Trading | Consumer Products