Turning the page. On a long, lonesome highway? In a way, I guess we all are, or have been... or continue to be. Such is life in the year 2020. The luckiest among us are the bored. The rest wish they were. Monday. August 31st. A month ends. Another begins. Next weekend is Labor Day. Markets? There certainly are more than a few moving parts. For one, September, not October, is historically the weakest month of the year for equity markets, even though October has dished out the more high profile collapses. This rings true even for election years.

Psst, the S&P 500 has only closed in the red four times since July 30th. While true, we have made mention in this column quite regularly of late of dwindling trading volume. This was the fact last week once again. On Friday, a very strong day at the headline levels, with both the Nasdaq Composite and S&P 500 closing at all-time records, an almost daily occurrence... there was little volume. It may interest folks to know that aggregate August trading volume for the S&P 500 (regardless of listing exchange) was indeed the mostly lightly traded calendar month since July 2019. By the same measure, trading volume across the Nasdaq Composite was the lightest since this past February, but would have been considered to be heavier than normal prior to that.

Message In A Bottle

There will be more than a few Fed speakers out and about this week. There will likely be an effort made to ensure markets are well prepared for the changes that will be made in the language when the FOMC publishes their policy statement on September 16th. The Fed's media blackout period ahead of that meeting will begin this Saturday, so this week is really a last chance to clarify Fed Chair Jerome Powell's messaging, if need be, on new methods for targeting employment and/or inflation.

That message certainly left a mark on how at least some investors think about the markets. Yes, the Communications Services sector led equity markets higher last week, and internet type stocks led that sector. Information Technology finished strong, in second place for the week, with the software/cloud industry leading the way there. That said, Financials uncharacteristically ended the week in the third position after a very strong showing by the large banks. This was the clear result of an expansion in the gap between short-term and longer-term Treasury yields. All of your large bank stocks, with the exception of Wells Fargo (WFC) have better looking charts than they did just a couple of weeks ago. In fact, Utilities were the only sector painted red last week, and that does make perfect sense.

...with buying a little Apple (AAPL) or Tesla (TSLA) ? I will be, if the managers who drove the shares so much higher in recent weeks take their profits now, as smaller investors file into these names that appear more affordable. Otherwise, no. Not now, maybe another time. Remember, though average September returns for large cap equities are not truly awful, the month runs negative close to 60% of the time depending on what one considers the "modern era" Some include half a century or more. Some only go back to 2006/2007 or so, the point where algorithms became far more important to prove discovery, and human thought development far less. Far, far less.

For investors that maybe still focus on the Dow Jones Industrial Average, bear in mind that even if there should be some profit taking in Apple, you may feel it less. As a price weighted index, Apple easily had the heaviest impact upon the index over recent months as that stock rallied hard. This morning, due to the stock split, AAPL wakes up as the 18th most influential sock in the Dow out of 30. The number one spot now belongs to UnitedHealth Group (UNH) . For those wondering, the new additions... Salesforce (CRM) is already the third most influential name in the blue-chip index, as the also newly added Amgen (AMGN) ranks fourth. Apple for that matter is now just behind International Business machines (IBM) , and just ahead of Travelers (TRV) .

While interesting, the Dow Jones Industrial Average is a side story of little importance beyond a prestigious label in the year 2020. Capital does not track the Dow to any great degree. When traders broadly refer to "the market" as being either up or down so many points, eight times out of 10, they are referring to the S&P 500, otherwise they mean the Nasdaq Composite.

The most important factor impacting our marketplace moving froward from here remains the ability of a nation of merchants to remain open for business, as well as the ability of their clientele (businesses and consumers both) to drive demand during this pandemic. I have said it many times, the virus is in charge, until it is not. That puts emphasis as this nation approaches the presidential election upon the rapid development of vaccines and therapeutics that are both safe and effective. Then there is growing urban flight, as well as the perception of mass violence. These things are not good for business, nor employment.

This is why the market has looked past the inability of the legislature to pass a next phase fiscal support package. Not because that is a positive, but because it is such a negative that not a soul charged with moving money can believe that either side will be willing to risk bearing the blame of not having brought aid to those in need. This is why the Fed has evolved toward an evolution in the implementation of monetary policy that will focus more on sustaining employment and less on inflation should that inflation move more rapidly to the high said than it has in the past, as long as it drags some growth along with it.

I'll tell you how that works. That works as long as American companies do bring back manufacturing and other jobs that had been off-shored in recent decades. This grows the middle class. Otherwise, the beneficiaries could be limited to the heavily indebted. The federal government first among them. Then on from regional governments on down through credit card holders. Mortgages? Uhm, probably not so much.

For investors, while I would not bet against tech at this time, or maybe ever... inflation like this, if achievable would be the best chance for cyclical type names to perform more evenly with growth over a longer time frame than any of the stutter-step failed or semi-failed attempts at rotation that we have seen in recent years. 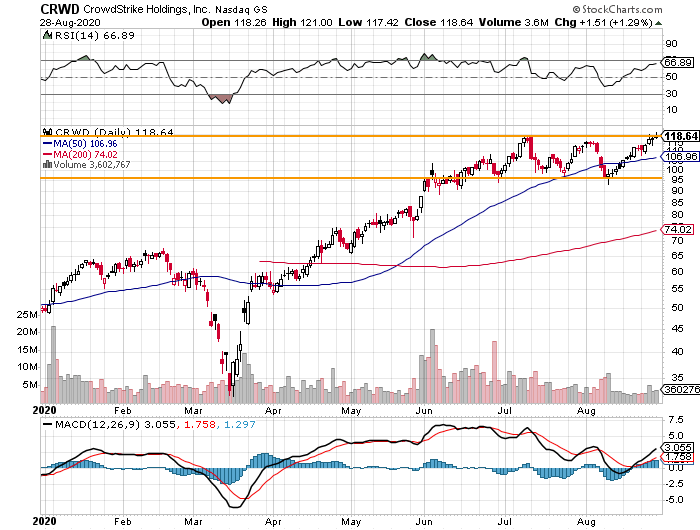 Readers will note that these shares have been stuck in a basing pattern since late June. The shares closed on Friday precisely at pivot, ahead of earnings, while both Relative Strength and the daily MACD appear to gain momentum. What do I think? Should this name hold this spot this week post-quarterly numbers, the door opens to prices potentially as high as $142.

My favorite cyber-security name has been, and remains Zscaler (ZS) . 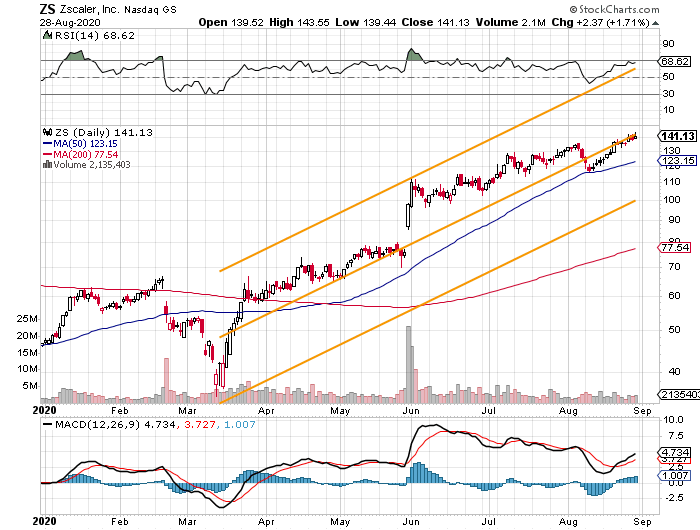 Zscaler does not report until September 9th. That name has been on an almost relentless tear since the March beat-down. Thinking this one needs a shave before next week.

(Apple and Salesforce are holdings in Jim Cramer's Action Alerts PLUS member club. Want to be alerted before Jim Cramer buys or sells These stocks? Learn more now.)

Get an email alert each time I write an article for Real Money. Click the "+Follow" next to my byline to this article.
TAGS: Economy | Federal Reserve | Investing | Jobs | Markets | Stocks | Technical Analysis | Trading | Cybersecurity