Shrinking US dollar? Yes, I know. The US Dollar Index, the DXY if you will...actually closed out Tuesday to the upside. The weakness earlier in the session was profound however. In fact, the index is weighted against a basket of peer global currencies, but not evenly. This imperfect measure for US dollar valuation is really for the most part a measure of the US dollar versus the euro (57.6%), with a dash of exposure to the Japanese Yen (13.6%), and British Pound (11.9%). The index also includes the Canadian dollar, Swedish krona, and Swiss franc to even lesser degrees.

So, the index is far from perfect. No exposure to quite a few important currencies as the intent has been to mimic global exposure to the world's reserve currencies though the Chinese renminbi could arguably be considered more significant in this way than either the Canadian dollar or the Swiss franc. Then, for that matter, the Australian dollar would also be considered more significant than the Swiss franc. Forget about reserve currency status, Mexico has been for the U.S.... a top two trading partner basically forever. Would it not make sense for the Mexican peso to be included in a "US Dollar Index." Just thinking a little outside the box here. I don't know.

The fact is that the perception of a weakening US dollar, even if it rallied late on Monday, pushed the Materials sector to the top of our daily sector performance tables. Materials themselves were led higher not by the miners. You may have expected that, but gold was not your commodities complex leader on Tuesday. The space was led higher by chemicals, and agriculture. The suggestion there should this be more than a one day flash in the pan?

Think about it. The implication is a successful shift in policy at the Fed, and one outcome of this weakening dollar would be a more balanced trade environment. Really, one of this sitting president's most openly expressed campaign themes... four years ago. Interestingly, as the dollar rebounded late in Tuesday's session, equities rallied to their highest levels of the day at the closing bell, while the yield curve flattened significantly.

Not all of the pieces fit nicely together, as you can see, and I think markets are trying to price in the potential for successful vaccines or therapeutics in the fight against Covid-19. You did see the disappointing news released on Tuesday in regards to the Sanofi (SNY) drug Kevzara, an effort that Regeneron (REGN) was collaborating on? Did not hurt the markets outside of those groups. By the way, this does not impact the REGN-COV2 cocktail that Regeneron is still developing. That therapeutic candidate is currently in Phase 2/3 clinical trials.

For, while Materials were leading the way, followed closely by Tech, and Discretionaries, the laggards were to be found in Utilities and Health Care. As mentioned, BioTechs and Pharma were hit by the "ugly stick". One might point there to the Sanofi news, one might point to the news that the House Oversight Committee will subpoena AbbVie (ABBV) seeking documentation (involving Humira and Imbruvica) as part of the ongoing investigation into drug pricing. Before you ask, I did not add to my long in ABBV on Tuesday, nor did I run for cover.

I also think that financial markets do not know how to price in the coming U.S. election beyond the fact that nearly all expect a close race, at both the executive level as well as in the Senate. I think the marketplace would prefer continued gridlock. I think the markets will take a contested election by the side that comes up short on the morning of November 4th, very badly.

All this said, Tuesday's rally was indeed broad-based. The Nasdaq Composite and the S&P 500 both set new records, again. Transports were hot. Mid-Caps and Small-Caps were hot. Winners beat losers at both of New York's primary equity exchanges, while advancing volume defeated declining volume at both locales as well. About the only negative take-away was the declining aggregate trading volume on Tuesday from Monday, but that is offset in my opinion by the fact that Monday was the final day of a strong month. Both the VIX, as well as the Index only Put/Call ratio that I pointed to just 24 hours ago, have reversed course since.

Does this mean that the danger has passed? The danger my friend will never pass. None of us saw this pandemic coming though all of us with any education at all, knew that this seems to happen every one hundred years or so. We were too advanced. Not this time. Yeah right. We'll win by playing "small ball". European equities are in rally mode on Wednesday morning and so are U.S. equity index futures as the dark of night still prevails over the light of day, for at least a little while.

Next phase fiscal relief. Is it on the way? Can there be a compromise? Is this already too political to correct? On Tuesday, Treasury Secretary Steven Mnuchin said, "We will continue to work with the Senate and House on a bipartisan basis for a phase four relief package." Mnuchin goes on to acknowledge that "certain areas of the economy require additional relief." I think we can all, on both sides of the aisle, agree with such observation. We're not done.

White House Chief of Staff Mark Meadows stated, "As we look at the number of things that we actually agree to, and the amounts of money allocated to those areas, probably the stumbling block that remains is the amount of money that would go to state and local help." Without passing judgment on either side, there you have it in a nutshell. There will be a "skinny bill" proposal made, probably by the Senate next week. Can two sides agree to agree on what they already agree on, while also agreeing to keep negotiating where they do not? You and I could. This legislature? Not exactly the kind of folks who inspire confidence.

I am going to bet that at least a few readers are not the kinds of folks that look into the minutiae of domestic macroeconomic surveys. Give it a shot, there can be plenty of interesting information inside. Take the ISM Manufacturing Index for August for instance. Really positive for the most part. Expanding at the headline for three months now. New Orders, which are the lifeblood of any manufacturing based survey, are hot as heck and the monthly gains are increasing in velocity. Same can be said for Production, and even Backlog of Orders.

Huzzah. Domestic manufacturing is back, baby. Or is it? Manufacturing based employment is still mired in decline, and though that decline is thankfully slowing, the trend has reached 13 months. These are the kinds of middle class jobs that any redomiciling of supply lines would increase labor market demand for, should multinational corporations go that route coming out of the pandemic. Yes, increasing demand for new orders is huge. Increasing demand for American labor is still the game changer.

Walmart (WMT) rocked on Tuesday but not for the reason I had pointed to in this column prior to the session. There was no TikTok announcement made, at least not yet. Who knows what impact Beijing's footprint will have on slowing this down? Walmart ran because the firm announced the September 15th launch of Walmart+, after what really was a short delay.

Walmart's effort to compete directly with Amazon (AMZN) Prime will come with either an annual $98 price tag or a monthly fee of $12.95. The new "club" will offer members free delivery at 'in-store" prices, same-day delivery from a majority of Walmart locations, discounts on gasoline where sold, and something I find most attractive... the ability to use Walmart's "Scan & Go" app that allows consumers to self-check items in stores while they shop and then bypass long lines on the way out of the building. 97% growth in e-commerce (reported for Q2) might just be the beginning. I would expect Target (TGT) to compete here relatively shortly.

You are going to want to see this... 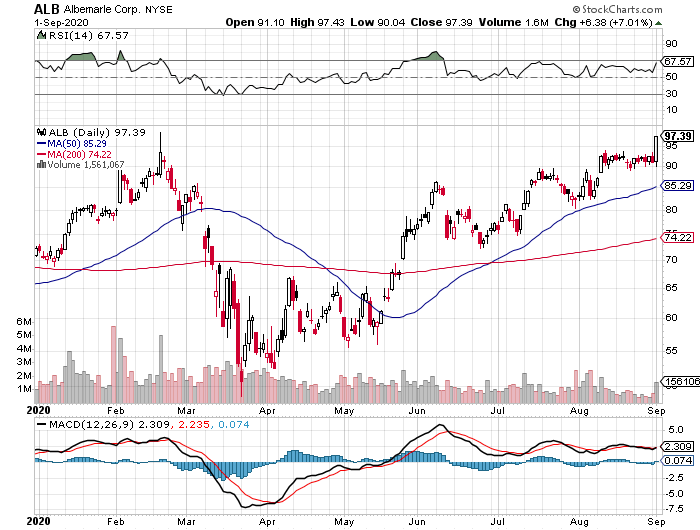 Readers will note that I have not marked up this chart of Albemarle (ALB) . I am just not sure how many cups, cups with handles, double bottoms, or Pitchfork models could be made to fit on this chart for any fellow chartists that might be trying to make a narrative work. Obviously a lot is going on here. After Tuesday's run, for me, the highs of last February are key. Failure here could turn the entire trend. A take and hold? That opens a door to prices up around $120 on momentum. That's why I would rather pay $100 for this name than $95. Got me?

(AbbVie and Amazon are holdings in Jim Cramer's Action Alerts PLUS member club. Want to be alerted before Jim Cramer buys or sells these stocks? Learn more now.)

Get an email alert each time I write an article for Real Money. Click the "+Follow" next to my byline to this article.
TAGS: Currencies | Economic Data | Investing | Markets | Stocks | Technical Analysis | Trading | Healthcare | Manufacturing | Coronavirus