Doctor: You know, it's a shame about Ed.

Fletch: Oh, it was. Yeah, it was really a shame. To go so suddenly like that.

Doctor: Ahh, he was dying for years.

Doctor: He was in intensive care for eight weeks!

Fletch: Yeah, but I mean the very end, when he actually died. That was extremely sudden.

That feels like how everyone on social media is talking about a few red days and the response from the perma-bears.

Am I charging in guns-a-blazing on the buy side today? No, but I've also been hesitant for weeks now, not that it has gotten me much.

My preference has been to play a squeeze here and there rather than dodge traffic, which has been my view on stock picking in the midcap and large cap arena.

Rarely can we see the tractor trailer coming down the road that is going to frighten or flatten the bulls. There are lots of guesses, but the truck often remains tucked around the corner and out of sight until the last minute. Sure, we can hear the engine rev or the brakes pump bit time until its arrival is a guessing game. And what the truck ultimately looks like is usually very different than what the majorities expect.

Maybe Evergrande is that truck. Really it is just the manifestation of the actions of the Chinese government, which is not a surprising bearish influence. Many have talked about it but until now it didn't have a cold body. Evergrande appears to be that body, and investors pay more attention when there is an occupied slab showcasing their fears.

The TLDR version is government policy doesn't matter until it claims a victim in the form of a big company.

What makes this break so ugly is the major indexes closed Friday around their 50-day simple moving averages (SMA) and opened today well below them. Usually, I'll look to the 200-day SMA if the 50-day SMA fails to hold. Unfortunately, that average sits another 6% below the current price on the SPDR S&P 500 (SPY) right now. Overall, that would be an 8% drop from Friday's close and closer to 10% from last week's high. 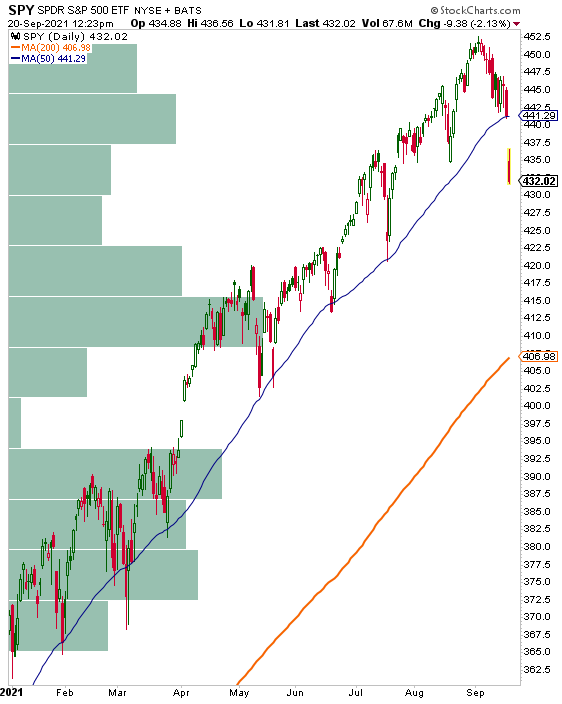 We have to go back to June 2020 to find the last time we tested the 200-day SMA. Heck, we haven't been this far below the 50-day SMA since 2020. If you are curious as to why so many are suddenly crying the sky is falling or we're staring into the precipice of the abyss, it is because we've been spoiled...and the market likes to teach spoiled traders expensive lessons.

No need to be a hero. If you're buying the dip, expect the 50-day SMA to now become resistance. At the very least, if you're buying here, consider selling some into the 50-day SMA. We still less than 5% from all-time highs on the SPY, so keep that in perspective when you think the world is ending. It actually won't feel like it is ending until we're in the 10% to 15% range for many and above 20% to 25% for those folks who have been through a crash.

Be careful out there.