"Operation Warp Speed". Haven't heard of it? That is just the Trump administration's program aimed at accelerating and supporting the effort to get a vaccine that targets the SARS-CoV-2 coronavirus that causes the disease known as Covid-19 to most Americans by the end of this year. Too fast? Too optimistic? Maybe. Maybe not.

What is optimism? Optimism is not what we all do every day. Watching the rising counts of both confirmed cases and the deaths that it has caused from near and far. Optimism is not being afraid to check Facebook (FB) just because you can't bear to see what friend is asking for prayers for a family member today.

Optimism is not staying home everyday, or is it heading out to work unsure of what you might bring home with you later... to your family. Optimism is not constantly hoping that maybe today, someone in the neighborhood found Clorox (CLX) wipes somewhere and sends a blast text as they had to with toilet paper and paper towels for months. Optimism is not having to worry about finding canned goods, or enough protein to feed a family on a regular basis.

Optimism is the smartest scientists in the world working constantly toward finding solutions to a global problem, without regard for potential profit. There will be far less of that than you think. Optimism is people being called back to work. Think continuing claims should be higher, based on jobless claims. We all know many folks who have lost their jobs. Suddenly, I know a few who have been called back. Hmm.

Optimism is a llama in Belgium whose antibodies completely neutralize this coronavirus. True story. Optimism is the apparent efficacy of Gilead's (GILD) remdesivir, as not a cure, but a starting point, in treating the already ill. Optimism is the size and scale that firms such as Pfizer (PFE) and Johnson & Johnson (JNJ) can bring to the effort to find a vaccine, and then produce enough of it.

Optimism is also the news Moderna (MRNA) was able to announce on Thursday morning. Oh sure, Moderna reported first quarter financial performance on Thursday morning. Knocked the cover off of the ball? Hardly. The firm went to the tape with an EPS of -$0.35, beating expectations. Revenue? Just $8.39 million. Missed by a mile, down 47.7% year over year. Oh, did I mention the $483 million funding award from BARDA (Biomedical Advanced Research and Development Authority) to push an accelerated development of the mRNA-1273 vaccine candidate? Did I mention the collaborative effort agreed to with Lonza Ltd. to produce one billion doses of this vaccine per year?

Optimism is the FDA. The Food and Drug Administration approving this mRNA-1273 for Phase 2 clinical trials after that candidate had just entered into Phase 1 in March. This next phase begins imminently with 600 participants, and even as this phase just gets under way, plans are already being finalized the get a Phase 3 clinical trial (could hopefully be a last step) going by early this summer.

In a statement released by the firm, CEO Stephane Bancel said, "We are accelerating manufacturing scale-up and our partnership with Lonza puts us in a position to make and distribute as many vaccine doses of mRNA-1273 as possible, should it prove safe and effective." Bancel goes on to add that hopefully the firm could have the final product approved for 2021, and that Moderna as well as some of the other companies racing toward this objective are indeed set to ramp up production ahead of final approval. Bancel told CNBC on Thursday morning that he hoped the company could initiate the manufacture of this vaccine a soon as this July. 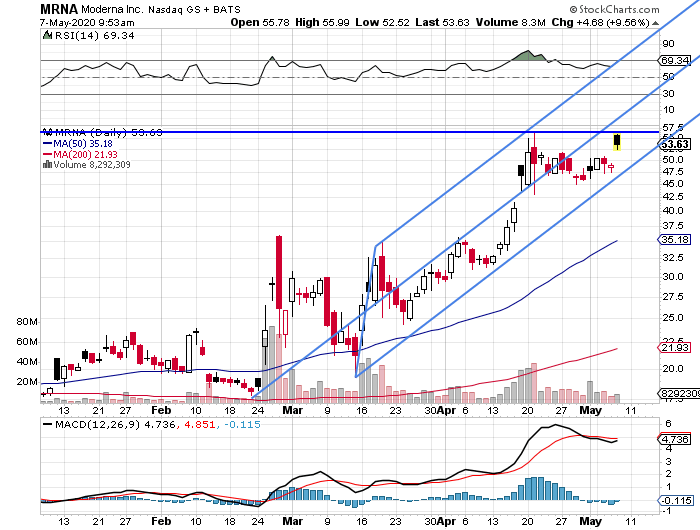 Traders will quickly see the liberty I took in creating this Pitchfork. That liberty which was the omission of the late February spike and following selloff, as it appears to have been a news related algorithmic spasm and the chart works better without it. Hey, it's my money I'm working with here. Traders will also see that the shares are wrestling with the April highs this morning, so established resistance. Is it time to sell? Yes. It's been time technically. My target price was $44. Already a home run. I'm not selling. Screw that.

Simply put, I see victory and strength created through suffering. I hear the birds. I see the children. I feel the rise of a great nation, the greatest nation as it climbs off of the canvas. You see that flag over there, yeah that one... That flag is still there, Bucko. Rock on.