It's pretty boring out there on the index side of the fence. That's exactly what the doctor ordered after the recent run. The SPDR S&P 500 (SPY) ETF is playing now-you-see-me, now-you-don't with its 50-day simple moving average while small caps continue to play catch-up with the Nasdaq. Remember, this was a crucial need for the bulls to prevent a potential repeat of March. Well, at least that is how I saw it back on April 15th.

We're slowly started to turn that relationship around. It's not in the clear by any means yet, but it has improved slightly. At the very least, we're not seeing a continued rise in the Nasdaq as measured against the Russell 2000. And today is getting help from the idea of never shorting a bull market.

One other note from today is we're seeing some outsized moves in individual securities. We're also seeing the makings of a short-squeeze in Tilray (TLRY) . With nearly three-fourths of the float now trading short, this is one that looks like it could skyrocket. Tilray is no stranger to short-squeezes as it still maintains one of the most epic squeezes of the past decade. That being said, this is a very different time. Cannabis stocks are all in the gutter and Tilray has struggled more than most. 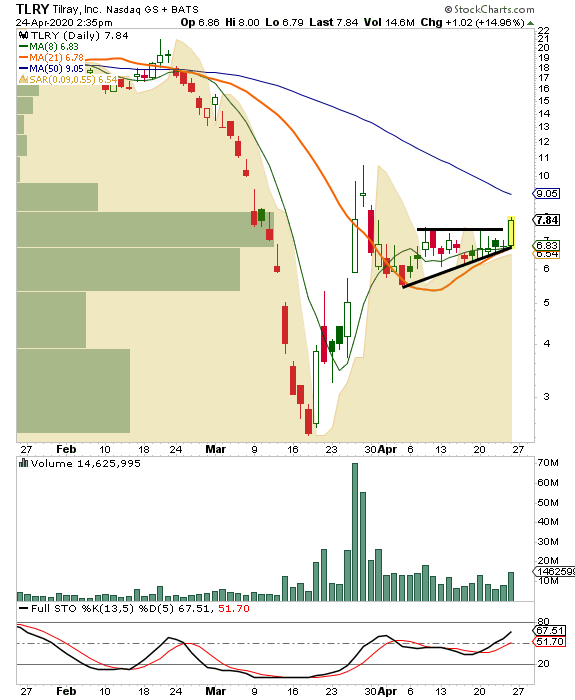 It's not something momentum traders would care about in the short-run, but if we do see a squeeze, don't be greedy. Create a position to do well, but also remember to take profits.

The daily picture has a great look to it. We have price breaking above the resistance on the ascending triangle. Our Full Stochastics is heading higher and bullish. Volume has increased on the breakout. The Parabolic stop and reverse recently turned bullish. Price is above the 8-day simple moving average (SMA) as well as the 21-day SMA. The 50-day SMA sits a full point higher, so shares can move 14% before reaching that next area of resistance. The short interest sits around 73% and call volume is through the roof today. Downside to support sits at a dollar.

I view a long here with a stop around $6.50 as risking $1.35 to potentially participate in a squeeze that could take shares into the $10 to $12 range in the next week or two. If this market continues today's momentum into next week, I fully expect that to happen. Managers are going to chase the trashier names soon enough.

Get an email alert each time I write an article for Real Money. Click the "+Follow" next to my byline to this article.
TAGS: Investing | Options | Stocks | Technical Analysis | Trading | Cannabis

Fisker Could Be a Buy If It Just Settled Down

The trading pattern is just too choppy for me to recommend purchase at this point in time. But check back.

What's Next for the Markets? What the Charts and Data Reveal