The name resonates, and that's exactly what they want. As the world's largest manufacturer of shoes, as well as a significant player in the world of apparel, or to be more specific, ath-leisure type apparel, Nike (NKE) has repeatedly taken steps that appear from the outside to be meant as a means to gather attention as they are for any social purpose. That point is for me, right now, neither here nor there. I am a runner. I have never found Nike running shoes to my liking. That is the extent of my relationship to the firm. Now, let's see if there is a chance here to try to make some money.

After the closing bell on Tuesday afternoon, Nike will report the firm's financial performance covering fiscal Q1 2020, or the quarter just in August to simplify. Industry expectations are for EPS of $0.70 on revenue generation of $10.44 billion. If these numbers are realized precisely, this would be good for earnings growth of 4.3% on revenue growth of 5.5%. What whispers I have heard are to the upside for the bottom line.

Interestingly, this stock has underperformed slightly the broader market for large cap equities at +18.3% year to date, with the S&P 500 now at 19.3%, and the sector with the Consumer Discretionary Select SPDR ETF (XLY) at +22%, but vastly outperforming the SPDR S&P Retail ETF (XRT) , now just +3% for 2019. Obvious headwinds would be competition in footwear, with Adidas (ADDYY) and others hot on Nike's heels (pun intended), competition in apparel, with the likes of Lululemon Athletica (LULU) out in front, pressure on selling prices due to the rise of e-commerce, and the impact of the U.S. trade war with China.

Now, to Nike's credit, the firm has done a spectacular job in strategic use of supply chains in order to mitigate trade war impact, while also finding ways to sell directly to consumers in order to do an end run around the struggles facing brick and mortar retail. As to China, 23% of all Nike footwear is manufactured in China, as is 27% of all Nike apparel. However, less than 10% of these goods are eventually imported into the U.S. 90% of goods made in China are sold outside of the U.S., negating the need to either raise prices or suffer margin deterioration at the hands of these tariffs. As for retail sales in China, there has been some erosion in the pace of growth, but not to the degree that Wall Street had feared, at least as of the end of fiscal 2019. Sales. For Q4, in the region described as Greater China, Nike sales grew at a 16% clip, off of the pre-trade war pace in the low 20%'s, but still impressive.

What To Watch For

Nike sells goods in two ways, either directly to consumers, or through wholesale to third party retailers. Nike Direct includes both Nike's branded retail and outlet stores as well as e-commerce. In aggregate, direct sales now comprise 32% of revenue, less than a third of which comes from the digital channel. The growth in e-commerce will be watched by Wall Street very closely. Last quarters print of 35% growth will be this quarter's benchmark. A solid print here is in my opinion, necessary to justify the stock's valuation at 26 times forward looking earnings. The entire consumer discretionary sector currently trades at 21 times. If the numbers are not there, or the guidance is not positive, that "goodwill" could evaporate in a hurry. 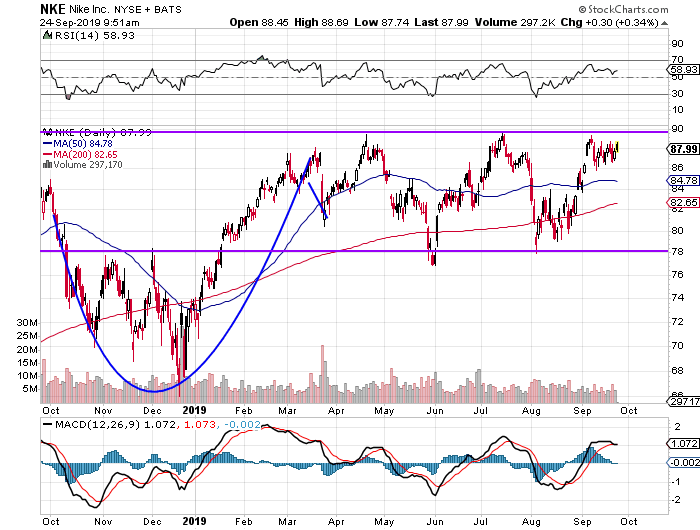 What I see on a year long chart, is a cup and handle pattern that came to an end in late March without providing a breakout. However, this led to a six month basing pattern that has provided sharply defined levels of resistance and support.

As a matter of fact, Nike's year long chart really does not look all that different from that of the S&P 500 itself.

Just Want Some Skin In The Game?

Get an email alert each time I write an article for Real Money. Click the "+Follow" next to my byline to this article.
TAGS: Earnings | Investing | Options | Stocks | Technical Analysis | Trading | Retail | E-Commerce | Sports | Stock of the Day